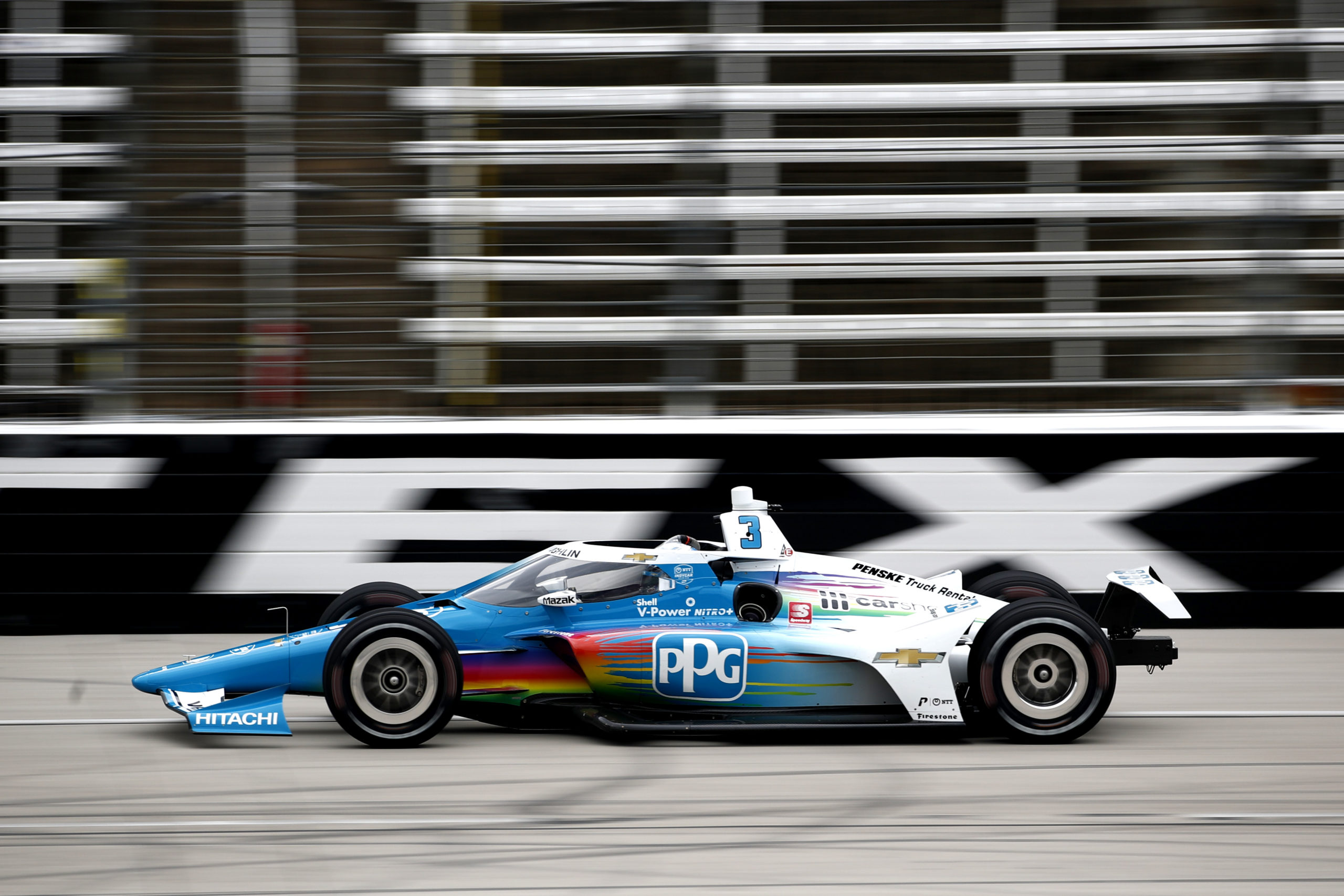 Scott McLaughlin was the leading Team Penske drive at TMS

Dixon was dominant in the Genesys 300 at Texas Motor Speedway, taking the lead on Lap 3 and holding it for the lion’s share of the 212-lap race.

McLaughlin, meanwhile, would find his way to the fore on strategy, making headway in the pit stop sequence and benefitting early from an early Full Course Caution.

By the end of the race, the three-time Supercars champion found himself in second place with less than 40 laps to go.

Ultimately, McLaughlin fell just short of the win, losing out by 0.2s at the chequered flag.

Nevertheless, the Team Penske pilot was ecstatic to finish second in only his fourth IndyCar Series race and his first on a Superspeedway.

“I’ve never been this bloody happy to be second, I’ll give you the tip,” said McLaughlin.

“I’m really stoked for everyone at PPG and Chevy. I just couldn’t quite get Scotty [Dixon] at the end there.

“I tell you what, it was bloody cool battling with one of my all-time favourite heroes – or is my all-time hero – Scotty Dixon.

“Two Kiwis one and two is fantastic. My mum and dad are watching at home, I know for sure.”

The final few laps saw Dixon fall into the clutches of McLaughlin as the race leader began to come upon lapped traffic.

An opportunity to pass wasn’t forthcoming, however.

“I was trying a little bit, but it’s so hard, the dirty air,” McLaughlin said of the closing laps.

“I was hoping like everything there would be some traffic towards the end and I could’ve had a run.

The final Full Course Caution put McLaughlin into second after second placed Felix Rosenqvist was baulked by an errant Marcus Ericsson who had lost his right rear wheel.

As the field cycled around under control of the Safety Car, the grandeur of the 27-year-old’s achievement hit.

“The last caution period I was like, ‘holy crap’,” McLaughlin explained.

“I was looking at the crowd and getting all excited. Oh man, I’m just so proud.

“We’ve done the work. I’ve worked really hard behind the scenes to make it feel good. We got some good strategy there by my team. They put me in the position.

“I’m just happy to bring it home for them. I’m really proud. I just wish my family was here with me.”

McLaughlin will do it all again tomorrow morning at 07:45 AEST for the Xpel 375.

Due to the cancellation of qualifying due to inclement weather, the grid will be set by the drivers’ points.

With his win, Dixon moves into the series lead and will start from pole position. Meanwhile, McLaughlin will start from seventh having surged up the standings from 15th.