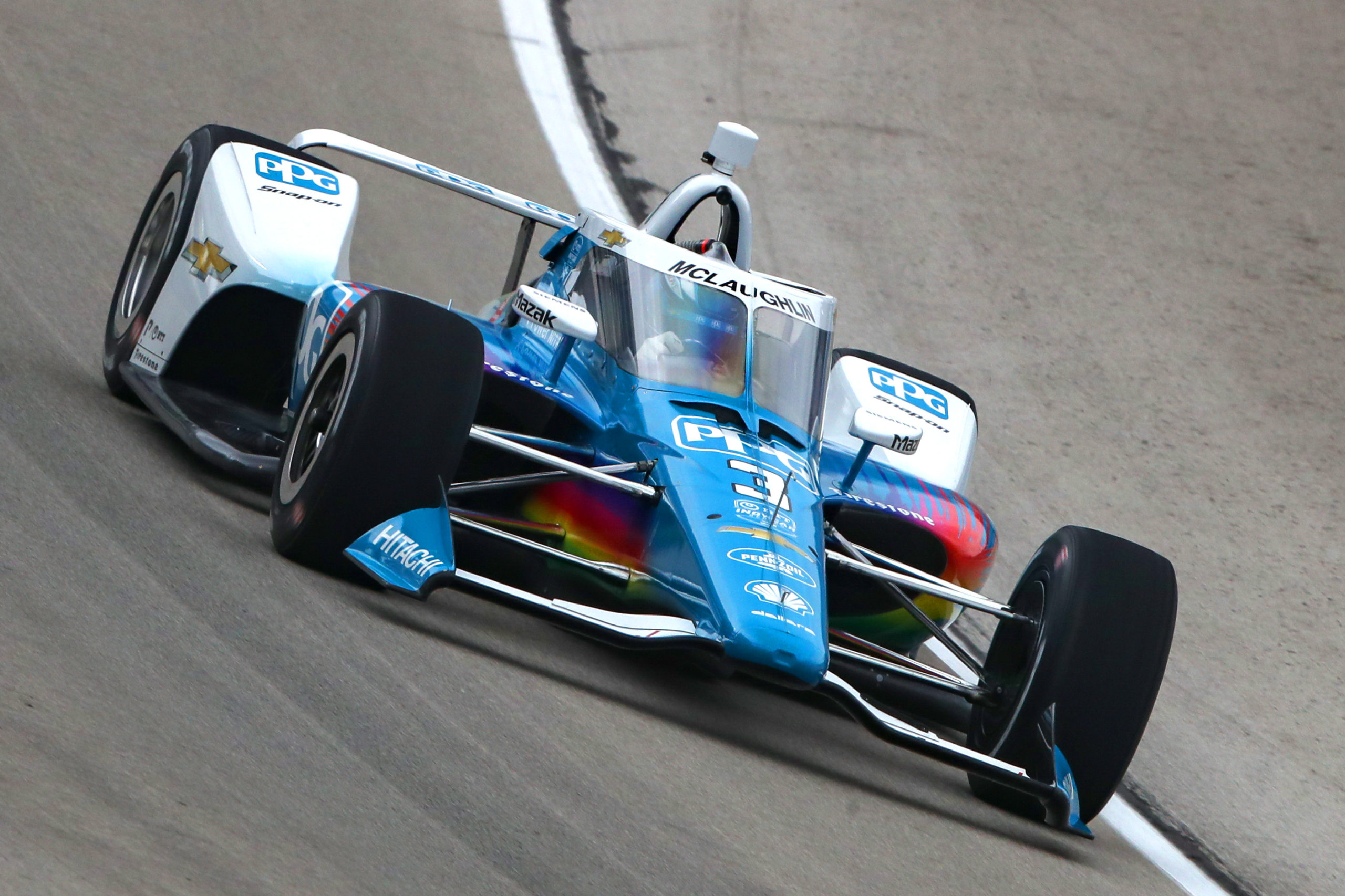 Dixon was dominant in the 212-lap affair, edging out McLaughlin by a mere 0.2646s in a thrilling finish to the Genesys 300.

McLaughlin, who started from 15th, was a benefactor during the first pit stop, which caught out a handful of drivers and saw him surge to the fringe of the top five.

As the race wore on, McLaughlin edged his way forward through the pit stop sequence, eventually to second place by the final restart.

For Dixon, it’s the fifth IndyCar Series win at the Superspeedway and moves him into the lead of the points.

As the cars crossed the line to take the Green, pole-sitter Alex Palou of Spain took the holeshot.

Dixon quickly made it a Chip Ganassi Racing one-two as he slipped down the inside of Will Power (Team Penske) into the first turn.

Palou’s time at the front was short-lived as Dixon took command of the race on Lap 3. The Chip Ganassi Racing duo soon pulled away, leaving Power in their wake.

As the race neared quarter distance, Dixon came upon traffic. His lead was threatened on Lap 54 when he was baulked by Connor Daly (Carlin), and Andretti Autosport duo Ryan Hunter-Reay and James Hinchcliffe.

Fortunately, Daly released Dixon and the Andretti drivers pitted, though that slashed the New Zealander’s lead.

Drama struck on Lap 57 when Sebastien Bourdais was hit by Newgarden. The Frenchman spun and went gearbox first into the outside wall, bringing out the Yellow.

Newgarden was later penalised for the incident and was relegated to the back of the field for the restart.

Those who hadn’t pitted came to the lane on the end of Lap 64. With the first round of stops completed, it was Dixon who led Palou, Herta, Harvey, and Alexander Rossi.

Power, who had been sitting third but pitted before the Yellow came out, fell to 14th.

Again it was Dixon who led the field to the Green for the first restart on Lap 72.

O’Ward was among those to pit early in an effort to get an undercut, coming to the lane on Lap 110.

Dixon ran long to Lap 125, pitting shortly after McLaughlin who stopped on Lap 123.

After the second pit stop sequence was completed, it was Dixon who held a sizable advantage over another early stopper Felix Rosenqvist who surged forward with an undercut.

McLaughlin was an incredible third while Palou fell to fourth. O’Ward, Ericsson, Herta, Harvey, Rossi, and Rahal completed the top 10.

As Lap 150 approached, Dixon’s lead began to diminish as Rosenqvist made a late charge.

The race leaders soon struck traffic, the Swede coming within half a second of Dixon. Similarly, McLaughlin soon found himself within striking distance of Rosenqvist for second.

However, as they battled for the second step on the podium, Dixon was able to stretch his legs once more.

The second Full Course Yellow flew on Lap 160 when Hinchcliffe spun on his own at the first turn.

The field soon piled into the pit lane on lap 164 for their final stops.

It was a trouble-free pit sop for Dixon, though the same couldn’t be said for Ericsson whose right rear wheel came loose as he exited his box.

Rosenqvist, who had been in with a shot of the win, lost time in the pits and fell to 12th as he took avoiding action to miss the errant Ericsson.

With the order cleansed, Dixon led McLaughlin to the Green with O’Ward, Palou, Herta, Harvey, Rossi, Newgarden, Rahal, and Pagenaud in tow.

Round 2 winner Herta was a late casualty, suffered a brake issue with 22 laps to go.

In front, Dixon held a stable lead over McLaughlin in the dying stages of the race. As the six-time champion came upon traffic, McLaughlin edged closer, but couldn’t come close enough to make a pass.

In the end, Dixon held on to win by a mere 0.2s over his countryman.

The IndyCar Series will line up again tomorrow morning at 07:45 AEST for the Xpel 375.

After qualifying was washed out, the grid for the double-header was determined by the entrant points.

Having taken the series lead, Dixon will start from pole position with Palou alongside him.

Power, who was only 14th at the chequered flag, has maintained third in the standings which is where he will line-up from.

McLaughlin’s second place finish has vaulted him to seventh in the standings. He’ll line-up alongside team-mate Pagenaud.