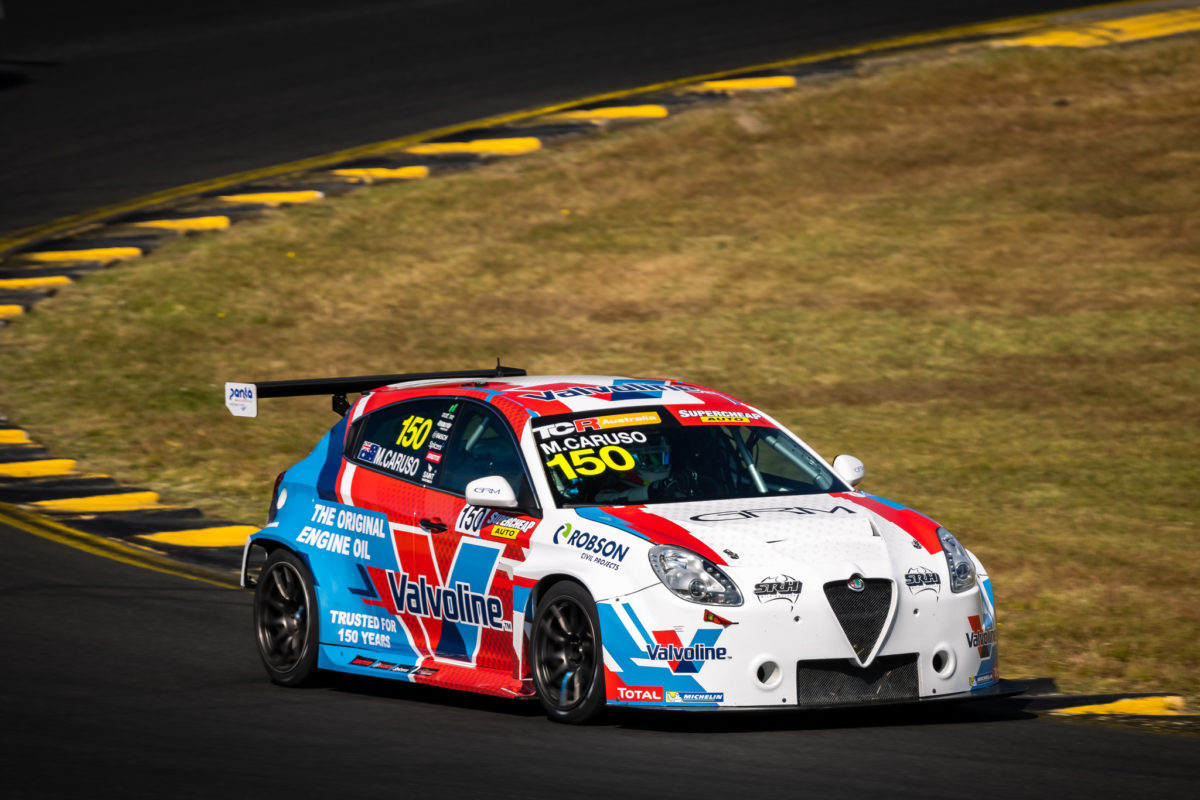 The #150 Garry Rogers Motorsport Alfa Romeo led all 11 laps which could be fitted into Race 3, after two Safety Car periods for early crashes.

It was a close-run thing in the two full green flag racing laps which closed out the race, Caruso initially coming under pressure from Josh Buchan before the Hyundai driver had to defend position to Dylan O’Keeffe (Renault).

That was the top three at the chequered flag, ahead of Nathan Morcom in the second HMO Customer Racing i30 N and James Moffat in the other GRM Renault.

Luke King finished sixth, one position ahead of Melbourne Performance Centre Audi team-mate Chaz Mostert, meaning those two close up slightly at the head of the series standings.

Caruso blazed into the early lead from the second row of the grid ahead of Buchan, who won Races 1 and 2, with Morcom taking up third and Mostert fourth.

However, Michael Clemente (Honda) had stalled on the grid and was hit by Jason Bargwanna (Peugeot), triggering a Safety Car before the first lap was out.

That was cleaned up in time for a restart on Lap 5, but precious little green flag running followed.

O’Keeffe went down the inside of Mostert into Moffat Corner (Turn 1) and James Moffat would go past the series leader also, to take fifth spot, as carnage unfolded behind.

King, who held seventh, moved left to avoid contact with Ben Bargwanna after getting a run on the #71 Peugeot through Turn 1.

However, that only resulted in a squeeze for space with Aaron Cameron and Lee Holdsworth (Alfa Romeo), sending the former’s Peugeot front-first into the concrete wall on drivers’ left, with the incident to be investigated post-race.

The second restart was initially to have come on Lap 9 but that was aborted due to Holdsworth stopping on track at the exit of the Turn 8 hairpin.

He got going and the race went back to green a lap later, at which time O’Keeffe nabbed third from Morcom into Moffat Corner.

Buchan put Caruso under big pressure which very nearly brought him unstuck at the start of the 11th and final lap, and the HMO pilot then had to look in his mirrors.

In the end, the front-runners would stay as they were, meaning Buchan missed out on a sweep but was joined by Caruso as a first-time TCR race winner this weekend.

Eighth through 10th at the finish of a race run under sunnier conditions than the morning’s foggy encounter were Jordan Cox (Alfa Romeo), Ben Bargwanna, and Tony D’Alberto (Honda).

John Martin (Honda) took 13th from a pit lane start after a pre-race radiator problem and Holdsworth did make the chequered flag, on the lead lap in 17th.

Round 5 takes place at Morgan Park, also on the Shannons Motorsport Australia Championships bill, on June 25-27.

CLICK HERE to watch the Supercheap Auto Highlights of Race 3