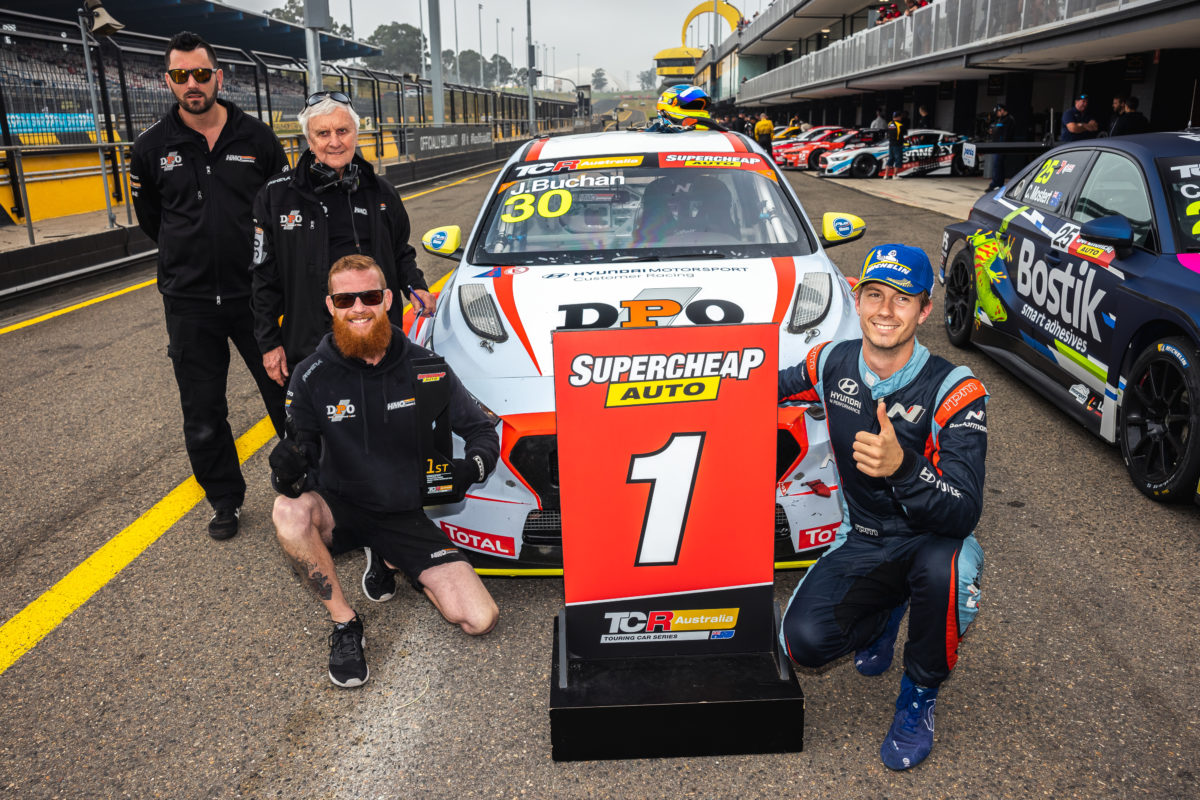 Josh Buchan has claimed a second race win in the Supercheap Auto TCR Australia Series less than 24 hours after his very first, at Sydney Motorsport Park.

The HMO Customer Racing rookie led all 15 laps in Race 2 of Round 4, taking a 2.1479s victory over series leader Chaz Mostert, with Michael Caruso picking up a first podium in the category.

When the contest eventually began, around 15 minutes late due to fog, Buchan (Hyundai) took a clear lead to the first corner as fellow front-row starter James Moffat (Renault) made a very slow getaway.

Cameron got ahead of Caruso in a battle of the Garry Rogers Motorsport drivers, before the former Supercars full-timer went down the inside of his team-mate on Lap 3 at Bond Bend.

Morcom capitalised on that move to take up fourth spot, even if he was very nearly unloaded as he and Cameron made contact through Turn 3.

While Buchan went as far as 2.6s clear of Mostert at the head of the field, D’Alberto had a train of cars forming behind him.

Caruso went under the #50 Honda as they swept into Moffat Corner on Lap 8 and, from there, D’Alberto would gradually fall down the order.

It was a comfortable victory in the end for Buchan, while second placed Mostert extended his series lead to 93 points, and Caruso was a somewhat distant third.

Morcom took fourth and Moffat salvaged fifth, thanks in part to a Lap 8 pass on GRM team-mate O’Keeffe.

The latter therefore ended up sixth, from Luke King (Audi) Lee Holdsworth (Alfa Romeo), Ben Bargwanna (Peugeot) from the back row, and D’Alberto.

Cameron ended up 11th, Jason Bargwanna (Peugeot) 14th after being disqualified from Race 1 due to a tyre mix-up, and John Martin (Honda) 20th.

Former series leader Jordan Cox (Alfa Romeo) pitted at the end of the formation lap due to a driveshaft failure and was officially a DNF.

Race 3 at the Sydney round of the Shannons Motorsport Australia Championships is due to kick off at 13:25 local time/AEST.

CLICK HERE to watch the Supercheap Auto Highlights of Race 2