Bottas on pole as Verstappen fails to fire

Bottas on pole as Verstappen fails to fire 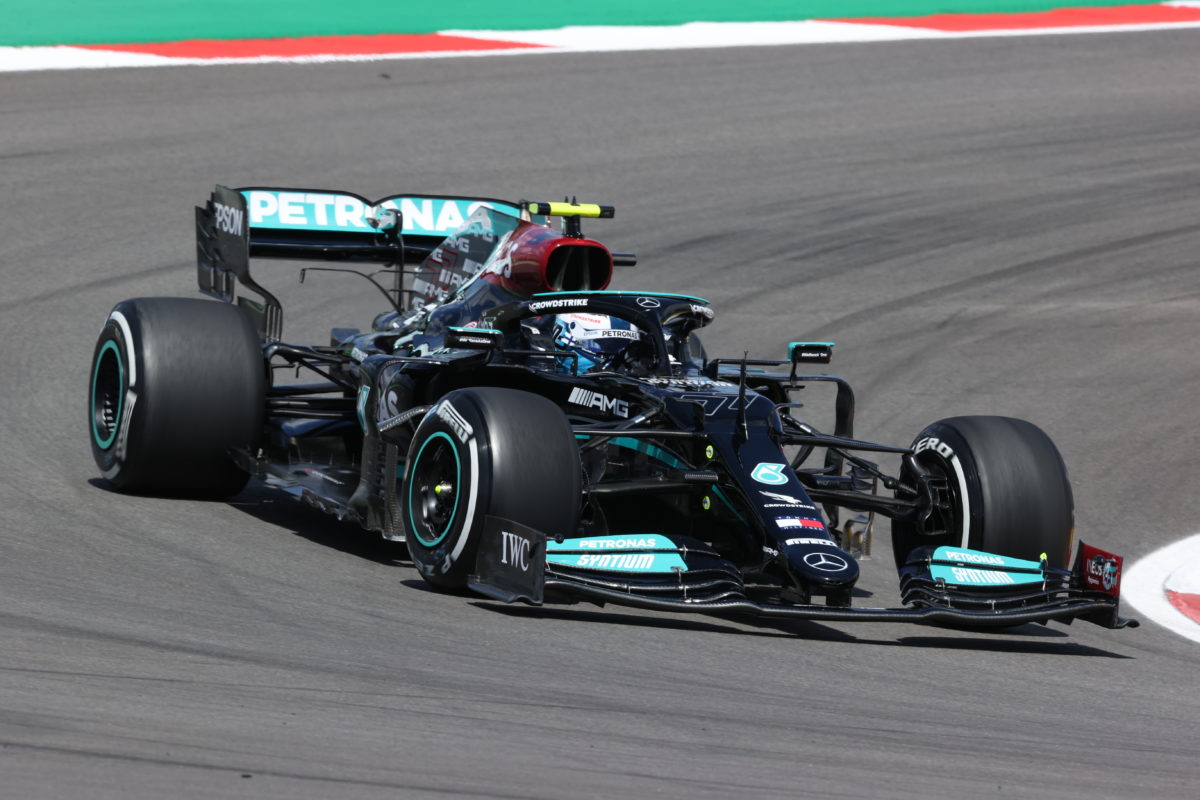 Valtteri Bottas will start the Formula 1 Portuguese Grand Prix from pole position after a qualifying session which saw Max Verstappen fail to deliver.

Bottas will head an all-Mercedes front-row for Sunday’s race with Lewis Hamilton alongside him, the pair ahead of an all-Red Bull second row.

A disappointing afternoon for Daniel Ricciardo meanwhile will see him start a lowly 16th.

The Australian encountered traffic on his first flying lap before a mistake in the final sector on his next effort lap failed to produce a time good enough to progress into the second segment of the three-part session.

The bulk of the field headed out on track as Qualifying 1 began, the two McLaren drivers opting for the medium compound tyres while the rest went for softs.

That was again the case as Norris recorded a 1:19.918s to get the serious running underway.

Sainz quickly bumped him, a 1:19.480s to go fastest as Ricciardo slotted in fourth best.

Hamilton lost a lap early for track limits, the Englishman having set a 1:18.726s which would have left him fastest.

Next time around, a locked brake into Turn 3 saw him run wide but still clock up a 1:19.493s despite the scrappy lap.

Perez found the gravel at Turn 4, the Red Bull drawing a yellow flag but able to recover after losing the rear end of the RB16B under acceleration.

In the second round of flying laps, Norris blazed to a 1:18.794s lap after swapping his medium tyres for a set of the soft rubber.

Hamilton emerged second fastest as Q1 came to a close to book his spot in the next phase, which became third as Bottas went fastest with the chequered flag out.

The McLaren driver was bumped by Esteban Ocon, the Frenchman the last driver on track to set a lap as he climbed to fourth fastest.

Ricciardo was over a second off Norris’ pace and the highest profile elimination from proceedings.

Qualifying 2 started with another flurry of activity, the majority with a set of medium compound tyres bolted on.

The exceptions were Norris and the AlphaTauri duo of Pierre Gasly and Yuki Tsunoda.

Hamilton soon dropped into the 1:17 bracket with a 1:17.968s, while Norris lapped in almost identical pace as Bottas to sit third.

Ocon was fourth with Verstappen having banked a 1:18.650s to sit fifth, one spot ahead of Perez.

Norris and Ocon had both used the soft tyres to record their laps, while their rivals had all used the mediums.

The final runs saw most swap to the red-walled tyres as they headed out with four minutes remaining.

Ferrari gambled with Leclerc, leaving the Monegasque on medium compound tyres while every other car in the session went for the softs for their final run.

Fastest, Hamilton ended his session early, as did Bottas, Norris, and Ocon who all took to the lane before the chequered flag was shown.

Missing the cut were Raikkonen, Tsunoda, Fernando Alonso, Antonio Giovinazzi, and George Russell, the Williams driver bumped from the session by 0.057s.

A moment for Verstappen at the start of Qualifying 3 and a mistake at Turn 8 saw the Dutchman record a 1:18.209s to start the session.

It was a time that was deleted after he was deemed to have exceeded track limits at Turn 4, where he had to correct the car and dropped time.

The field poured back out on track for their final push laps with four minutes remaining.

It saw Red Bull fit soft tyres to both their cars, while Bottas and Hamilton had mediums on their Mercedes W12s.

All bar Sebastian Vettel headed out, the Aston Martin driver having set a best in the session of 1:19.833s to sit ninth.

The German ran off sequence, hitting the track with scarcely more than two minutes left in the session, leaving time for just a single warmup lap before a final timed effort.

with his first time deleted, Verstappen had not set a time in the segment, his first legal timed lap just 1:18.746s, 0.4s shy of Bottas’ best.

Hamilton was unable to depose his colleague to end the session second and confirm Bottas on pole.

Red Bull locked out the second row, with Perez fourth with Sainz fifth from Ocon, Norris, Leclerc, Gasly, and Vettel.

Bottas was the only driver to find time in Qualifying 3, doing enough to snag top spot two weeks after he crashed out of the Emilia Romagna Grand Prix.

It will see him line up on pole for the 17th time in his career, equalling the total of Sir Jackie Stewart.