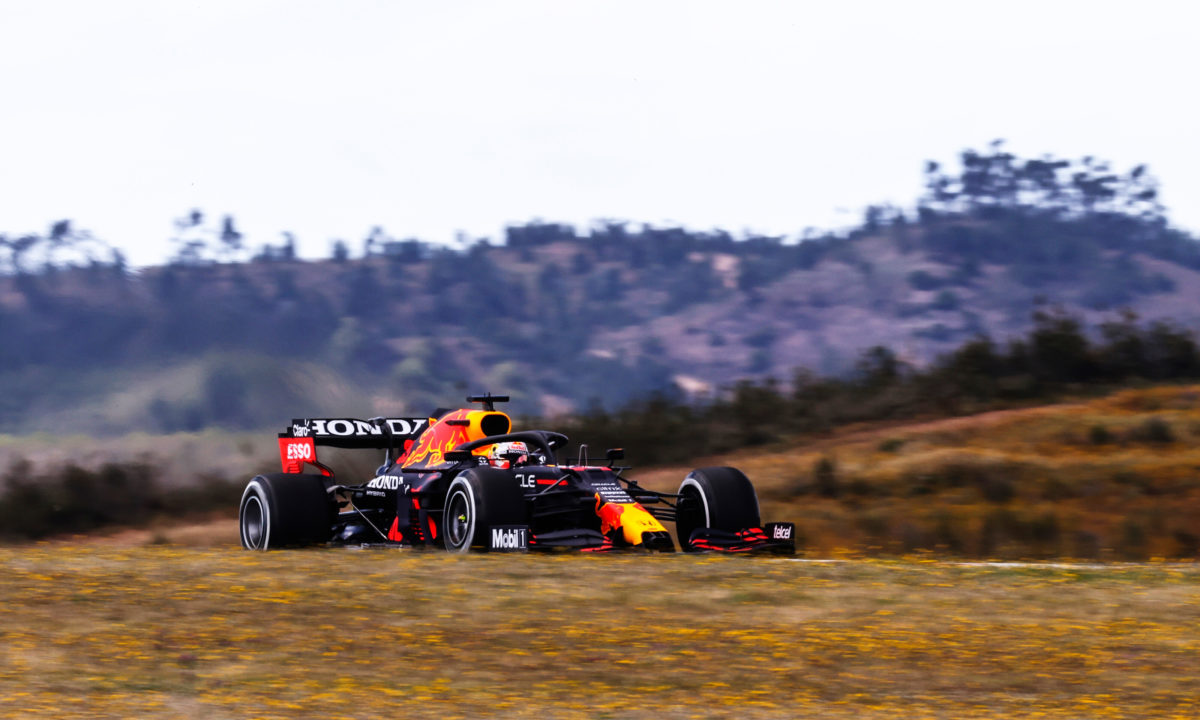 Verstappen was 0.236s clear at the top, though the real margin between he and Hamilton appears much closer.

Aston Martin’s two drivers were the first out on track, Lance Stroll heading Sebastian Vettel as the session got under way.

The only other driver to immediately head out was Mick Schumacher, the Haas driver the only one of the three to begin a timed lap.

Both Aston Martin drivers did nothing more than an installation lap before cycling back to the pits, just as Nikita Mazepin took to the circuit.

Schumacher duly set the first timed lap of the session, a 1:23.026s to kick off proceedings.

Hamilton headed out after seven minutes to be the first of the heavy-hitters on track for the day.

Mazepin’s opening lap was 1:24.955s, 1.9s slower than his team-mate despite sporting a set of soft compound tyres versus Schumacher’s mediums.

Hamilton’s time on track was brief as he returned to the pit lane immediately having completed only an installation lap.

As he did so, a host of others headed out on track including Yuki Tsunoda, Kimi Raikkonen, Bottas, both Alpine’s, Antonio Giovinazzi, and Daniel Ricciardo.

Fernando Alonso shot to the top on a set of medium compound tyres, quickly bested by Tsunoda as the Japanese driver stopped the clocks at 1:20.161s just prior to 20-minutes into the session.

Ricciardo’s first timed lap saw him record a 1:20.528s on a set of medium tyres, the McLaren driver opting for two preparation laps.

The session saw a mixture of soft, medium, and hard compound tyres used by the field.

Notably absent from the opening 20 minutes was Verstappen, the Red Bull driver the only one not to head out.

Esteban Ocon banked a 1:19.672s, backing up Alonso’s earlier lap in a promising performance for Alpine.

Most impressive was that the Frenchman had managed the time on a set of medium tyres, and saw him head Charles Leclerc (1:19.743s) on a set of soft tyres.

Ricciardo rose to third with 37 minutes to run with a 1:19.929s while moments later Leclerc improved to fall 0.002s away from Ocon’s best.

At 35 minutes remaining, the Virtual Safety Car was deployed when the wind dislodged an advertising hoarding.

It was poorly timed for the two Mercedes, especially Bottas who was on a flying lap and therefore had to abort.

Verstappen too had finally emerged from the Red Bull garage and begun a hot lap when the VSC was deployed.

The Finn then fell to third best when Verstappen completed his first timed lap, a 1:19.141s.

That was soon beaten by Hamilton with a 1:18.755s; all the fastest laps coming on a set of soft compound tyres.

The championship leader shaved that down to a 1:18.735s lap, a time some 0.3s away from the theoretical best of the session.

That stood at a 1:18.439s with Hamilton the best through the first two sectors and Verstappen in the third.

The Red Bull driver got closer to that marker with his next timed effort, recording a 1:18.545s to move nearly 0.2s clear at the top.

Inside the final 15 minutes of the session, Hamilton began another flying lap.

He’d spent two laps warming his tyres, and was just 0.038s down on Verstappen’s best of the session to the first split.

The Englishman wasn’t able to improve, dropping 0.6s in the middle sector. Bottas did go faster, rising to third best in place of Perez who fell to fourth.

Verstappen clearly had more pace, going faster in the first sector and equalling his best in the middle before dropping time in the final third of the lap.

Ocon’s lap continued to keep the Alpine driver in fifth ahead of the two Ferraris, the top 10 rounded out by Norris, Pierre Gasly, and Raikkonen.

Mazepin had an off in the final three minutes, finding the gravel in the middle sector.

The Russian driver sat at the bottom of the timesheets, 0.009s slower than Nicholas Latifi, while Schumacher was 16th fastest in the other Haas.

The session ended with Verstappen on top from Hamilton, Bottas, Perez and Ocon in fifth.

Ricciardo was only 12th, 0.3s away from team-mate Norris, who was eighth best behind to two Ferraris.

Gasly and Raikkonen ended the session inside the top 10, while Alonso was 14th and Vettel only 18th.

Cars return to the track for qualifying for Sunday’s race a midnight AEST.