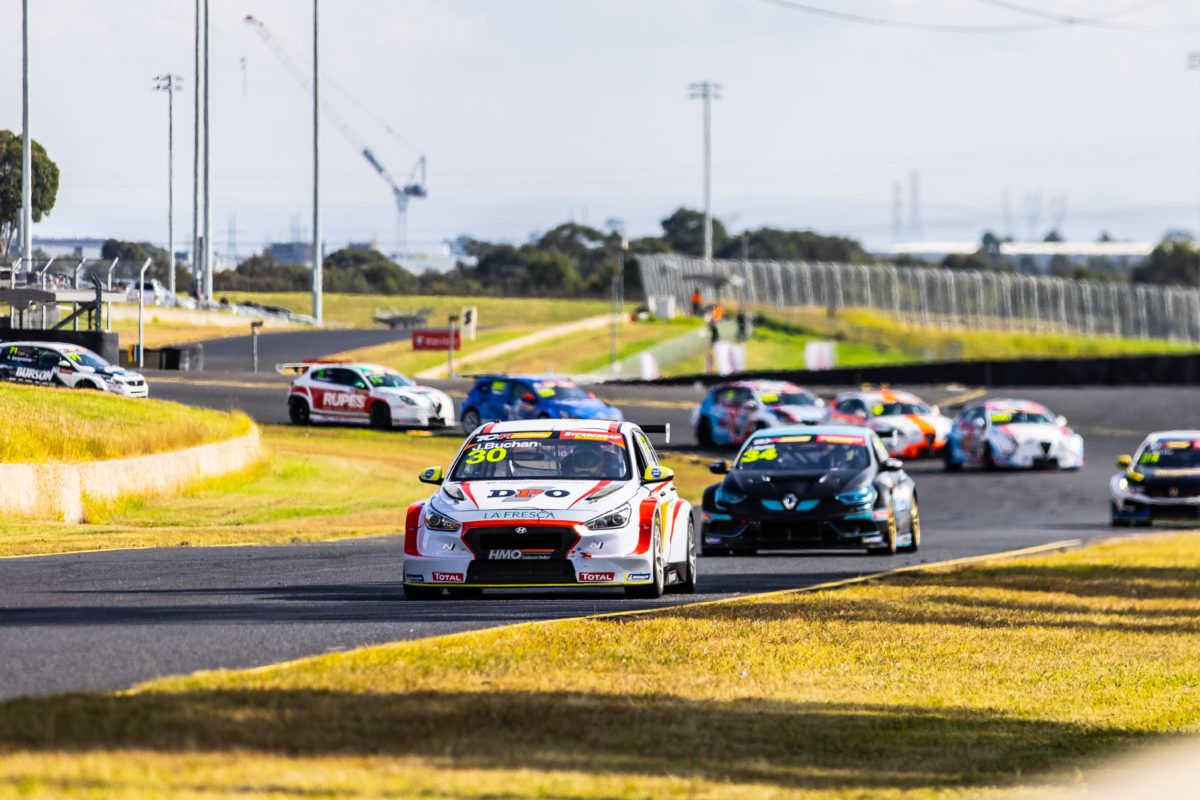 Josh Buchan has taken a maiden Supercheap Auto TCR Australia race win in Sydney while there was heartbreak for pole-sitter Dylan O’Keeffe before the encounter had even begun.

O’Keeffe was due to get away from the inside of the front row in Race 1 at Sydney Motorsport Park but a technical issue for the #33 Renault ultimately led to the penalty of a pit lane start and he went on to finish 10th.

Instead, Buchan got Hyundai and HMO Customer Racing’s first victory of the season, with James Moffat home second in the other Garry Rogers Motorsport Renault.

John Martin held third for much of the race but took the chequered flag in 12th after his Honda slowed on the penultimate lap.

Having explained to Speedcafe.com, after topping practice, how a litany of dramas had helped to disguise the true potential of the Meganes, O’Keeffe was the victim of a boost controller problem before the start.

The GRM crew was able to restart the car and clear the issue, but that triggered a penalty and the 23-year-old duly peeled off at the end of the formation lap.

While that left Buchan alone on the front row, it was Martin who led early on having got a good launch and then squeezed down the inside of the #30 i30 N at the first corner.

Moffat took up third, ahead of Mostert and D’Alberto, and the top four was still covered by less than once second by the time they got back to the control line at the end of Lap 1.

With a queue of cars having formed behind the #24 Civic, Martin got loose as he entered Brabham Straight at the end of Lap 2.

Buchan took advantage with a brave move around the outside at Moffat Corner, while Moffat dived down the inside of Martin in more conventional fashion at the braking zone which followed, at Bond Bend.

Moffat could not quite keep touch with Buchan, the gap between them being one second on Lap 5 and stretching beyond two seconds on Lap 11.

When the chequered flag flew after 15 laps, it was 3.3347s, with Moffat reporting that he was managing an issue in Car #34 in the latter stages.

Martin held third spot until Lap 14 but had a tyre delaminate, meaning Mostert inherited another podium finish, while D’Alberto took fourth having survived several laps of pressure from Morcom.

Race 2 at the Sydney round of the Shannons Motorsport Australia Championships starts tomorrow at 10:10 local time/AEST.

CLICK HERE to watch the Supercheap Auto Highlights of Race 1