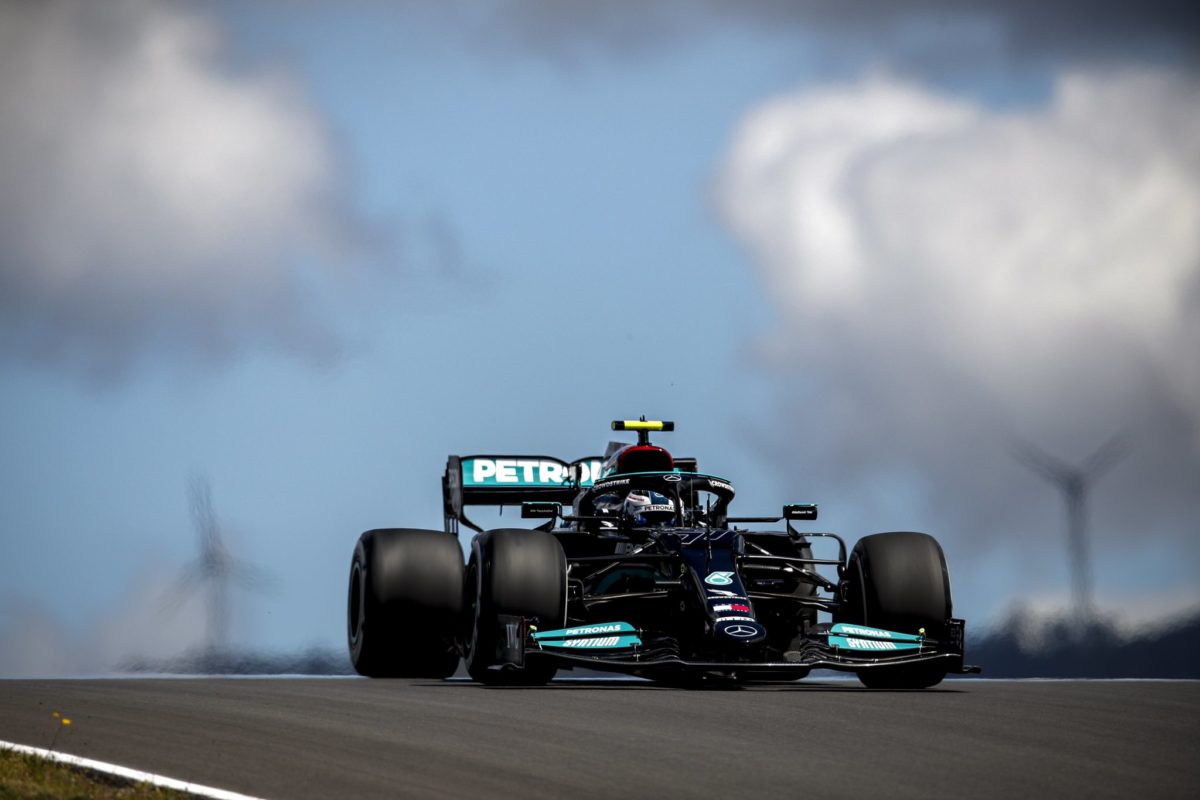 The Mercedes driver topped a busy session by just 0.025s at the end of the first 60-minutes of running.

As Carlos Sainz headed out, a fan shroud appeared to be stuck under the Ferrari, breaking free as he exited the pit lane.

Esteban Ocon headed out on track before circling back to the pits where he had a new front wing fitted to his Alpine.

It was the Englishman’s first outing in an FP1 session and followed on from his confirmation with the team in the days preceding this weekend’s event.

The early laps saw Bottas remain at the top of the time sheets, though Fernando Alonso and Sainz both had spells as next best.

Approaching the 15-minute mark, four cars had scarcely turned a lap or, in Max Verstappen’s case, headed out on track at all.

The Dutchman didn’t leave the garage in the first part of the session, while Perez, Yuki Tsunoda, and Ocon had not set representative times.

Perez had gone out with aerodynamic sensors on his car initially, which he’d then returned to the lane to have removed.

Lance Stroll had gone faster, though his 1:21.541s was deleted for exceeding track limits at Turn 4.

Though fastest, Ricciardo was only the quickest of all in the middle sector.

It was Max Verstappen, who’d finally headed out on track and gone third fastest, who was quickest to the first split, and Bottas in the third.

Verstappen duly bested that, setting a 1:21.053s to shoot to the top despite a wobble exiting Turn 14.

It saw the Red Bull best through the first two thirds of the lap, as the ideal time dropped to a 1:20.769s.

Ricciardo had slipped to fourth as Lewis Hamilton set the third fastest time of the session just prior to the half-way point in the 60-minute hit out.

Much of the early running was done on the hard compound tyres, the two Haas drivers using a set of mediums while, with 34-minutes to run, Alonso emerged on a set of softs.

Halfway through, Ricciardo joined Alonso on a set of soft compound tyres and quickly began improving on his previous best.

By comparison, Alonso’s best at that point was 1:22.295s, also set on a set of the red-walled tyres.

Like Gasly earlier, Leclerc lost two consecutive laps for exceeding the boundary of the racing surface at Turn 4, and then Turn 1 next time around.

The pace then dropped to 1:20.088s as Bottas headed out on a set of soft compound tyres, 0.2s faster than Verstappen’s best.

He continued to push, and on his second flying lap recorded a 1:19.648s to become the first driver to lap Portimao under 80 seconds.

On track, Verstappen was complaining of vibrations as the session approached 10-minutes to run.

He remained second fastest to that point, Gasly having climbed to third for AlphaTauri with a 1:20.444s.

Fourth best was George Russell, who’d lapped in 1:20.529s on a set of the hard compound tyres.

Verstappen had tried to carry on with the vibrations in the RB16B, but eventually conceded defeat and pulled into the pits.

Even still, he’d managed a 1:19.673s to improve by more than 0.5s on his previous best and all but eliminate the gap to Bottas at the top of the time sheets.

Leclerc climbed to third with a 1:20.181s on a set of soft compound tyres.

His spell there didn’t last as Hamilton improved with a 1:19.967s, the Mercedes driver still 0.3s away from the ultimate pace.

It was a busy session for the Brackley squad, he and Bottas both chalking up 30 laps apiece.

Perez joined the 1:19 club, the Mexican setting a 1:19.846s almost as the chequered flag fell to end the session.

Leclerc pipped Hamilton in the final running with Gasly sixth over Russell, Norris, Sainz, and Ocon.

Practice in Portugal continues with the second 60-minute session scheduled to start a midnight AEST.