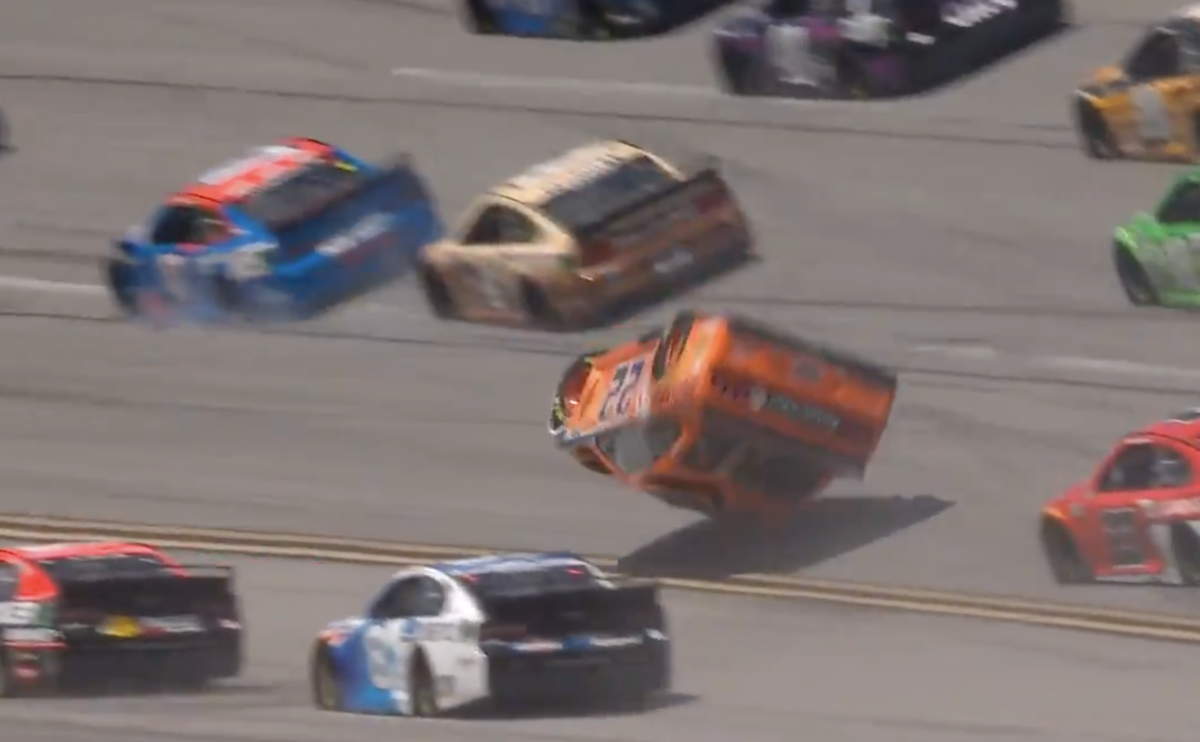 NASCAR will investigate Joey Logano’s high-speed rollover at Talladega Superspeedway with the intention of making immediate changes to the current-generation cars.

Any last-minute advancements to this model car in the Cup Series would be significant given they will not be used after this season, with the arrival of the Next Gen car for the start of 2022.

Logano’s Team Penske Mustang went flipping at the end of the backstretch during last weekend’s Geico 500 at Talladega after catching air.

The car landed on its roof, with significant damage to what is known as the roll-hoop, which collapsed into the cockpit on Logano’s helmet.

While the 2018 Cup Series champion had praise for NASCAR safety when interviewed soon after the crash, labelling the incident as a product of superspeedway racing, he also made clear “we have to fix it”.

.@NASCARONFOX takes a closer look at what happened on Lap 60 at @TALLADEGA. #GEICO500 pic.twitter.com/47l7VhWaD6

“Certainly we’re right in the middle of those conversations, starting this morning,” he told SiriusXM.

“We’re disappointed that what transpired [did] transpire but super happy that Joey was okay and that the roll-hoop and all of the things that needed to protect him did.”

When asked about the numerous advancements over the years to keep cars from getting airborne, Miller said the crash is evidence more still needs to be done.

“Obviously we saw this weekend that it’s not enough and we will continue to work as always to see if there’s something else that we can do immediately to counter-act those effects,” he commented.

Even at this late stage of the current generation of Cup Series cars, NASCAR is not ruling out implementing changes, with two superspeedway races remaining in 2021.

“Cars getting up in the air is not good, it’s something that we’ve been working on and will continue to work on,” Miller said.

“I know that our engineers will be in touch with the crew chiefs and the engineers at Penske and Joey trying to dig through every detail of what transpired there.”

Teams are eager to work with NASCAR on immediate changes, with Team Penske’s competition director, Travis Geisler, stating “[even] one more [superspeedway] race left is too many if you’re not 100 percent sure you’re as safe as you can be.”

Ryan Newman suffered a head injury in a horrific crash at least year’s Daytona 500, which resulted in NASCAR making changes that included slowing the cars down and the addition of a lower main roll bar support.

“It’s been a long evolution and I certainly will miss some steps along the way, but some of the bigger things that are incorporated now, like the roof flaps, that was a very, very big one,” Miller said of the advancements in safety.

“The tail extension that’s on superspeedway cars, that’s not on any other kind of car, that keeps as much air from getting underneath the car should it go backwards.

Superspeedway races traditionally produce larger crashes due to the intense nature of pack racing, the product being an aerodynamic draft, with the cars being restricted from going over 220mph (354km/h).

NASCAR heads to Kansas for another race this weekend.