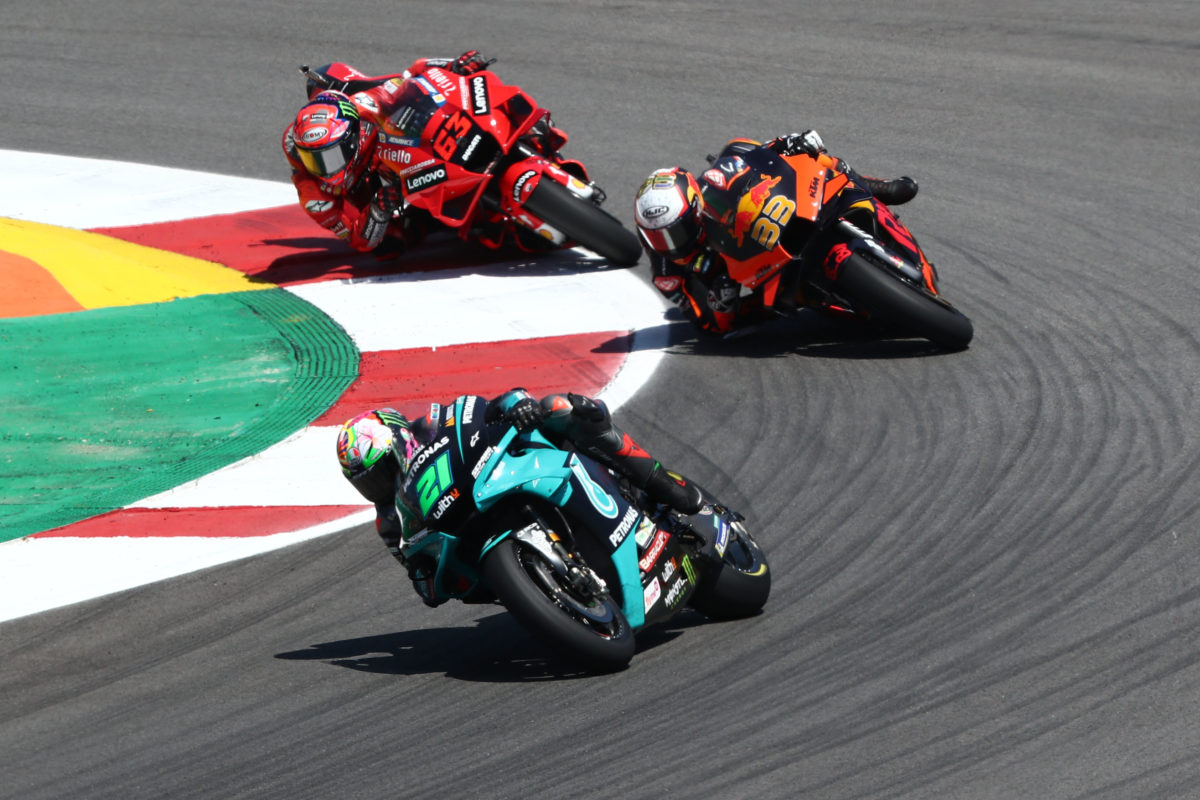 Jorge Lorenzo has challenged Franco Morbidelli to prove Yamaha wrong after claiming the manufacturer is not treating Morbidelli “in the best way” by equipping him with a downgraded bike compared to its factory riders.

Petronas SRT’s Morbidelli is competing on what is known as the ‘A-spec’ M1 from Yamaha for the 2021 season, effectively still a 2019 bike, save for a few upgrades.

So far in 2021, the top step of the podium has been awash with Yamahas, courtesy of ts factory riders Maverick Viñales and Fabio Quartararo winning all three races this season on the current-spec M1.

Quartararo heads up the standings by 15 points, while satellite team rider Morbidelli languished in 18th at the Qatar season-opener with technical issues and sits 11th in the riders’ standings after slightly better Doha and Portugal races.

It comes after Morbidelli finished second in the championship last season and picked up three of Yamaha’s seven victories, something Lorenzo believes the Japanese marque is forgetting.

Retired three-time MotoGP champion Lorenzo had fighting words in support of Morbidelli, who the Spaniard believes is not being treated well, after the pilot rider backtracked on his frustrations after Qatar.

“Well, my opinion is perhaps quite strong but I think that Yamaha in this case is not treating Franco in the best way because [he] was second overall last year,” Lorenzo said on his 99 Seconds YouTube show.

“Ducati gives the four riders [at its factory squad and Pramac] practically the same bike and Yamaha is not doing it, precisely with Franco.

“Now, I believe that Franco should demand the same treatment from Yamaha and he does well by threatening in quotes, starting to talk to other factories or those other factories that want him.

“But once he puts on his helmet and gets on the bike, he has to concentrate on getting the most out of him and showing Yamaha that [they are] wrong by not giving him the same treatment.”

Lorenzo also had pointers for team-mate Viñales, who struggled at Portimao and finished 11th, making clear that his downturn in form is only temporary.

“He is young and he will come out of this and win races again,” Lorenzo said.

“What is clear is that he has two handicaps that are limiting him a lot.

“The first is the starts; he has to improve on that, he has to get very serious about trying to improve them because they are limiting him in a great way.

“And then those emotional ups and downs that I think he has, I think he needs to be much more consistent because in the end there are always going to be problems.

“The Yamaha in some circuits is not going to go well, in others it will be you who does not find yourself fast in the circuit or with the motorcycle and you cannot go fast.

“You will have crashes, injuries, moments where you will be physically worse or emotionally and there you have to be consistent, always think positive, try to get the maximum possible points without excuses and saying that everything is a disaster.”

MotoGP continues for the Spanish Grand Prix at Jerez this weekend.