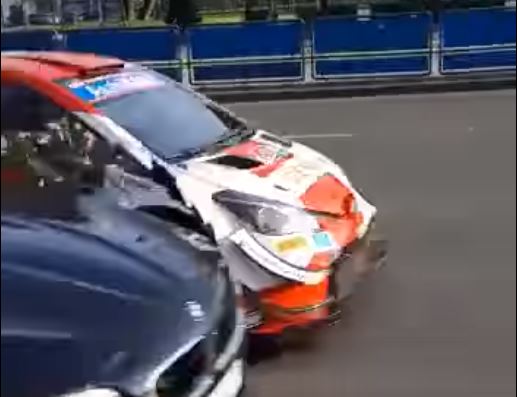 Sebastien Ogier collides with a car in traffic

Sebastien Ogier has been involved in a traffic crash ahead of the final day of stages in the WRC Croatia Rally.

Video emerged of the incident on social media (see below), with Ogier on public roads looking to change lanes before the crash with another car.

“Seb and Julien [Ingrassia, co-driver] were involved in a traffic incident on the road section from service to the first stage this morning,” Toyota Gazoo Racing WRT confirmed on Twitter.

“Thankfully, nobody was hurt and their Yaris WRC is OK to continue on the stages.”

The Toyota driver headed the rally heading into its final day, though just over 10s covered the top three.

Ogier continued to lead the rally after the Sunday’s opening stage, Special Stage 17 of the event.

However, he then slipped to second behind his Toyota team-mate Elfyn Evans on SS18, the gap between the two sitting at 2.8s.

That increased to 3.9s on SS19, the penultimate stage of the rally, with Thierry Neuville just 4.1s further back in third.

The rally will conclude on Sunday afternoon (local time).