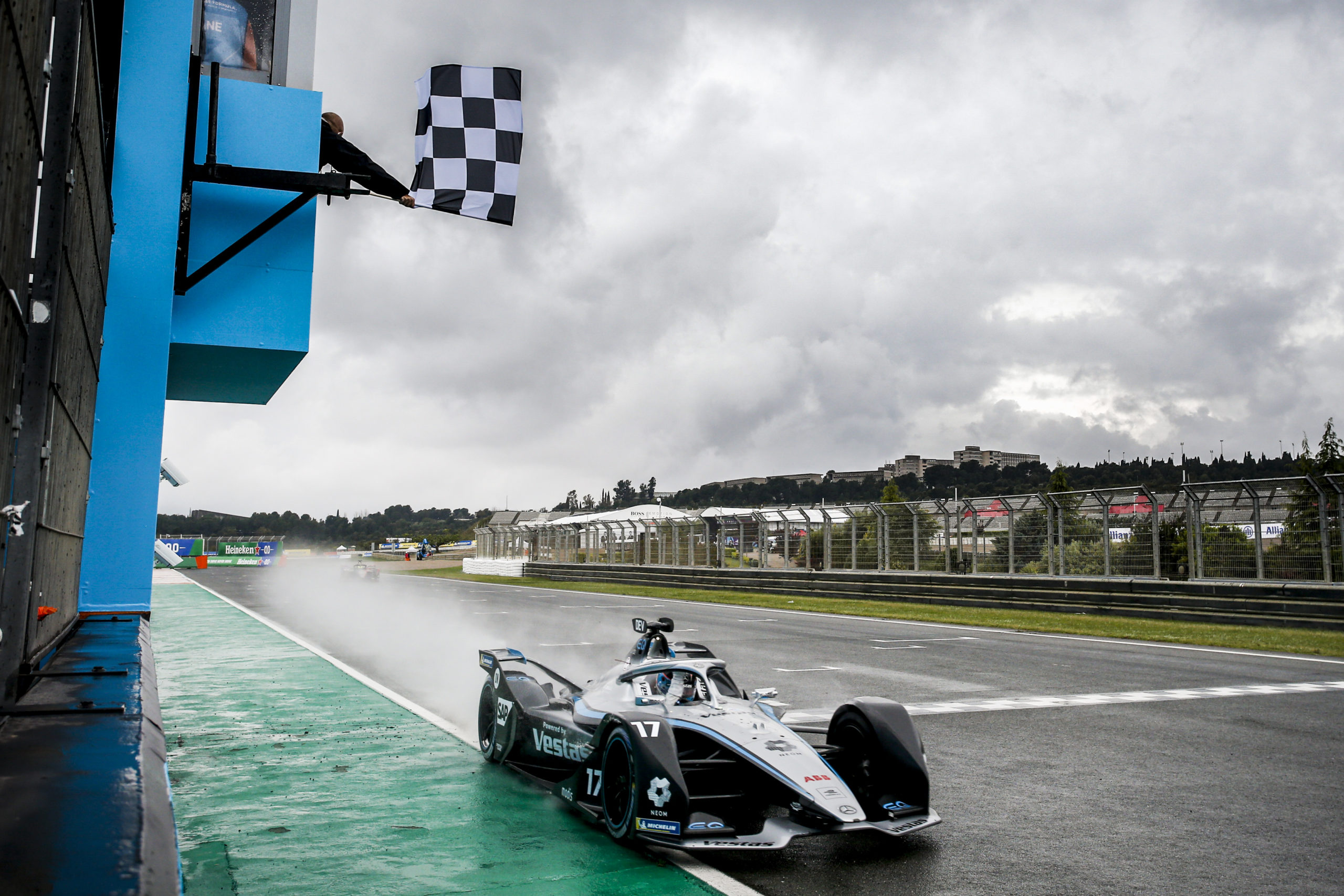 Nyck de Vries has won the Formula E Valencia E-Prix in a race that descended into a farce in the final two laps.

A spate of Safety Cars, and resulting energy reductions throughout the race saw the bulk of the field unable to make the full race distance.

De Vries, who’d run second for much of the proceedings, swept through to win as behind him chaos ensued.

Sebastien Buemi ran wide before being tagged Andre Lotterer as he recovered at Turn 8.

The Porsche driver was nerfed as he turned into the apex at the cut through, spinning the former Toro Rosso F1 driver midway around the opening lap.

It triggered a Full Course Yellow as Buemi was unable to extract his car from the gravel, its rear wheels having bogged in the sand.

The incident occurred while Lotterer was looking to put a move on Norman Nato, missing his braking and skating into Buemi.

The VSC was quickly converted into a full Safety Car as the Nissan e.Dams driver retired from the race.

Predictably, Lotterer was given a drive-through penalty for the clash.

It’s emergence resulted in a reduction in available energy, a 4kWh drop for a total of 6kWh reduction on what is normally available during the course of the race.

At the restart, Da Costa again skipped clear, just as he’d done at the initial start.

He quickly extended a 2s advantage over Gunther and Alex Lynn as they battled for second.

De Vries swept by Lynn around the outside at Turn 4 with 33 minutes remaining in the race, the move catching his rival by surprise.

The Dutchman moved into second half a lap later, demoting Maximilian Gunther at the final corner of the standard circuit layout.

His race was soon over, sliding into the gravel at Turn 2 where he became beached.

It drew another Safety Car with 24 minutes (plus one lap) to run, and a further 3kWh energy reduction to make for a total of 9kWh.

De Vries went with Da Costa at the restart that came with just over 20 minutes remaining. 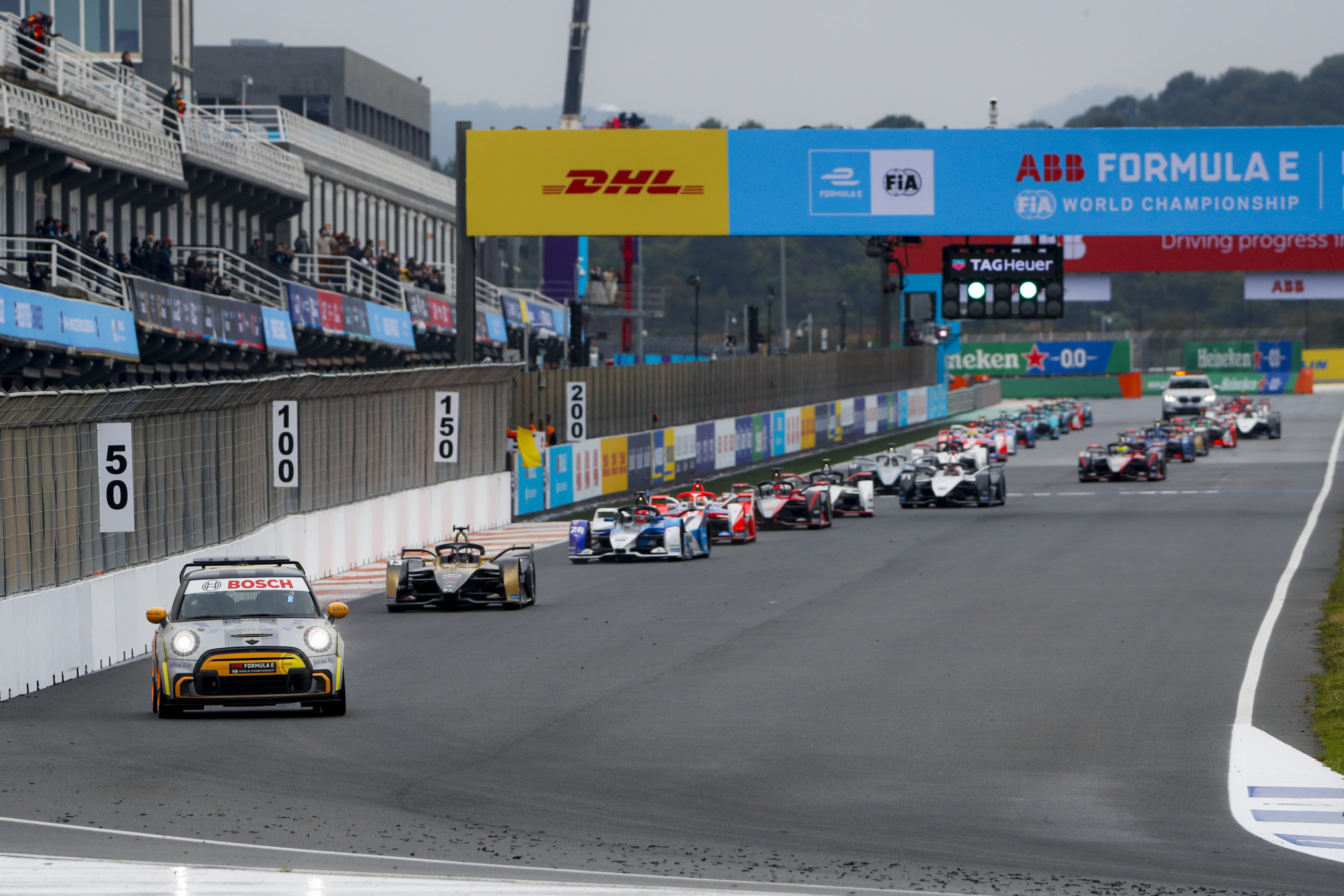 The Safety Car leads the field away at the race start

Sergio Sette Camara had a spin with 15 minutes remaining to draw the third Safety Car of the race.

Mitch Evans shortly after pulled into the pits, parking his Jaguar in the garage as he retired from the race.

Replays showed it was a clash between the two; Mitch Evans looking at the inside of Sette Camara who turned into the apex.

The resulting contact left the latter parked in the gravel, and ultimately the forced Jaguar out.

A further reduction of energy followed, 5kWh less to take the total reduction to 14kWh.

With six minutes to run, Lotterer found himself beached in the gravel at Turn 1, drawing what would amount to be the final Safety Car of the race.

The Porsche driver had tagged Edoardo Mortara, sending the pair off the road though the latter was able to scramble through and return to the pits.

The remaining 17 runners, Pascal Wehrlein having stopped with braking issues, were neutralised with five minutes remaining.

A final restart occurred with 15 seconds and one lap still to run, ensuring the race would have a further two laps.

A final 5kWh energy reduction then wreaked havoc with the field.

It effectively ended the race for Nato in ninth, who had less than one percent energy remaining at the restart.

De Vries in second had six percent remaining, and Nico Muller further back had a similar amount.

Race leader Da Costa began the final lap with one percent energy, allowing De Vries to sweep through into the lead as he desperately tried to conserve energy.

Second on the road, Rowland battled with De Vries but had no usable energy left.

Behind them, ridiculous scenes emerged as cars limped to the flag in an effort to avoid disqualification for running out of allowable energy.

De Vries went on to win, Muller second though well down the order on the road, and Stoffel Vandoorne third.

A total of  five drivers were disqualified; Rowland, Sims, da Costa, Lynn, and Bird, while there were 10 other retirements – three of those for apparently running out of energy in the run to the finish.

Only 12 runners were classified as a result as the race ended in ridiculous scenes.