Nick Percat is keen to see Supercars drivers band together to have their voices heard on Gen3, as an overwhelming majority continues to push against the introduction of paddle shift.

A potential move away from a gear lever for Gen3 cars next year has largely been met with contempt by drivers and fans alike.

Even popular Supercars commentator and tech guru Mark Larkham has spoken out against bringing paddle shift to the category.

Percat earlier this year said paddles would “probably kill my love for Supercars” – a position from which he has not backed down.

The Brad Jones Racing driver took to social media this morning, tweeting, “Asking for a friend, who actually wants paddle shift in the Gen3 car. The drivers aren’t being asked, so just wondering who thinks it’s a good idea.”

To date, 93 per cent of more than 250 responders to his attached poll voted against paddle shift.

On his similar Instagram post, a stack of drivers led by Shane van Gisbergen and James Courtney supported his message.

“Supercars showed us a steering wheel layout at Symmons Plains and it came as a surprise I think to everyone in the field that it had paddles on it,” Percat elaborated to Speedcafe.com.

“Even our engineering group was surprised to see that, and obviously they are across the rules a bit more than us drivers.

“So there was that, and a few questions raised around the paddle shift and the way the rules are going, and what that means with auto-blip or no auto-blip and stuff like that.”

Percat suggested there could be moves made to give drivers a bigger say on the sport’s highly anticipated next phase.

“I won’t say who, but I sent one of the other drivers a message the other day asking for help on how we could maybe even create a way of all the drivers having a bit more of a voice,” said the 2011 Bathurst 1000 winner.

“So get us all together and sit down and talk about what we do and don’t want, and what we think would create good racing. 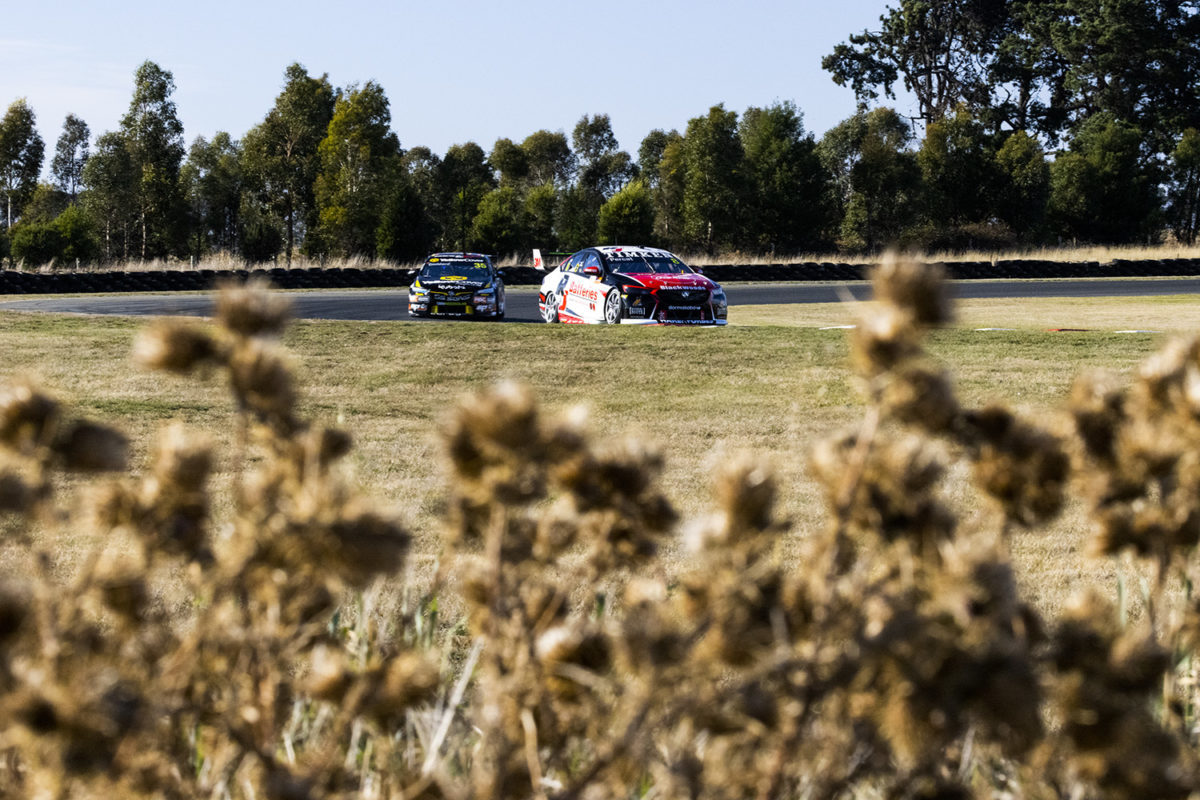 Percat runs ahead of Zane Goddard at Symmons Plains

“I don’t know if it’s a bit late to start something like that but I would be keen, if we could get every driver involved in it to actually be able to look at what Supercars want to do.

“I’m not saying the driver group knows what needs to happen or what’s correct. It just would be nice to have some input on that.

“For someone like Shane to be so big on the no paddle shift and no auto-blip and keeping the cars raw, he’s the guy in the most form at the moment, he’s driving the most cars out of all of us – he’s in GT cars, he’s in Supercars, he’s in BMWs at the 6 Hour and stuff like that.

“For him to be on the train of we don’t want all those driving aids and we don’t want paddle shift, I think it speaks very loudly.

“And obviously the fans too, they want to see us driving the cars and making it hard.

“I don’t know why we want to dull down the sport and make it easier, I feel that creates less mistakes from us drivers.

“We don’t want to see what happened with Sladey at Bathurst but we want to be able to see errors come up and create passing.

“Even at Tassie, the hairpin for example, once we have auto-blip and paddle, I don’t think you are going to see the mistakes at the hairpin and corners like that.

“I think it would be something that would be regretted if that’s the way we go.”

Percat further questioned whether paddle shift would in fact cut costs, as has been mooted.

“I honestly can’t even see how it’s really going to end up cheaper,” he added.

“It’s a big outlay to make the gearboxes compatible to run a paddle shift system, from what I’m being told at the moment.

“I’m not sure as a sport we should be looking at outlaying big lumps of money when we have the equipment there to run.

“I definitely agree with the rules changes with the chassis, the aero, the bodywork, and bits and pieces [but not paddle shift].”