DJR ‘only getting stronger’

DJR ‘only getting stronger’ 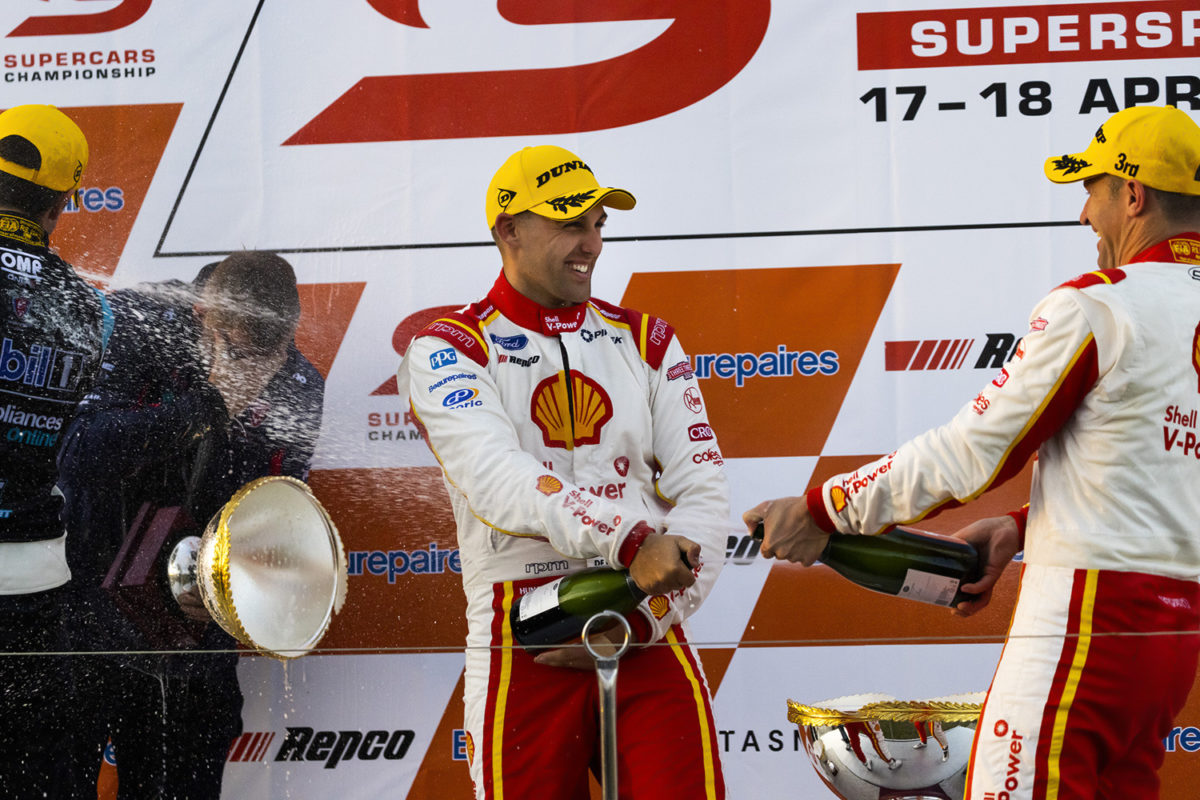 Anton De Pasquale and Will Davison are confident that the Shell V-Power Racing Team is on an upward trajectory after giving the team its first double podium of 2021.

De Pasquale finished second and Davison third in Race 8 of the Repco Supercars Championship, after the former had also rounded out the podium in Race 6 and the latter in Race 7 at Symmons Plains.

The squad which, as DJR Team Penske, won the last three drivers’ titles and three of the last four teams’ championships had experienced a relatively tough start to the season.

However, with four podium finishes out of a possible six at the Beaurepaires Tasmania SuperSprint, it now finds itself second only to Triple Eight Race Engineering in the teams’ standings.

That is after Triple Eight racked up two one-two finishes on the Apple Isle, although it was finally beaten in the last race of the weekend, when drivers’ championship leader Shane van Gisbergen finished sixth, one position behind team-mate Jamie Whincup.

De Pasquale is now eighth in the standings having started the weekend 17th, while Davison crept up one spot to fifth.

According to the latter, the results demonstrate just how close the competition actually is, and that DJR is on the rise.

“[Van Gisbergen] seemed to certainly lose a little bit of pace [in Race 8] but I think it just really sums up the nature of the category right now,” said Davison, who forms one half of an all-changed full-time driver line-up at Stapylton in 2021.

“For people to think anything’s a given, it’s not.

“You see guys like Will Brown and Zane Goddard coming up on the second row in qualifying, and it just goes to show there’s a lot of good equipment out there. If people spend time focusing on getting their things right, anything’s possible.

“Obviously the T8 guys have been impressive, had us all scratching our heads a little bit, but it doesn’t take much to not quite execute and nail it.

“They certainly were still there, but not like we’ve seen, so that certainly gives us belief and hope.

“We’re only three rounds in together and it’s so good working with these guys – [they are] super professional – and we’re only getting stronger.

“We’ve certainly got our eyes firmly fixed on continuing this progression, so we can start challenging for wins.”

De Pasquale had said after his Race 6 podium that DJR has “a long way to go” to catch Triple Eight, but is buoyed by the signs his team showed over the course of the Symmons Plains event.

“Obviously not the top step, where we want to be, but it’s awesome for the team to have both of us on the podium.

“[The] cars [are] in a bit more form than they have been [for] the last couple of rounds, and we’re getting our feet together.

“As we move into the next couple of rounds, we’re going to some tracks which are really strong for the Shell V-Power Racing Team, so we’re looking forward to it.

For Davison, the consistency of performance in Tasmania was also a plus.

“From the moment we rolled out, the balance of the car’s been super, super comfortable, [I was] feeling really a part of the car,” he recounted.

“Obviously we’re trying to find a little bit more peak speed to get on the front row and try and win a race, but we’re right there in the top five in every session and certainly the race car and the balance is really good.” 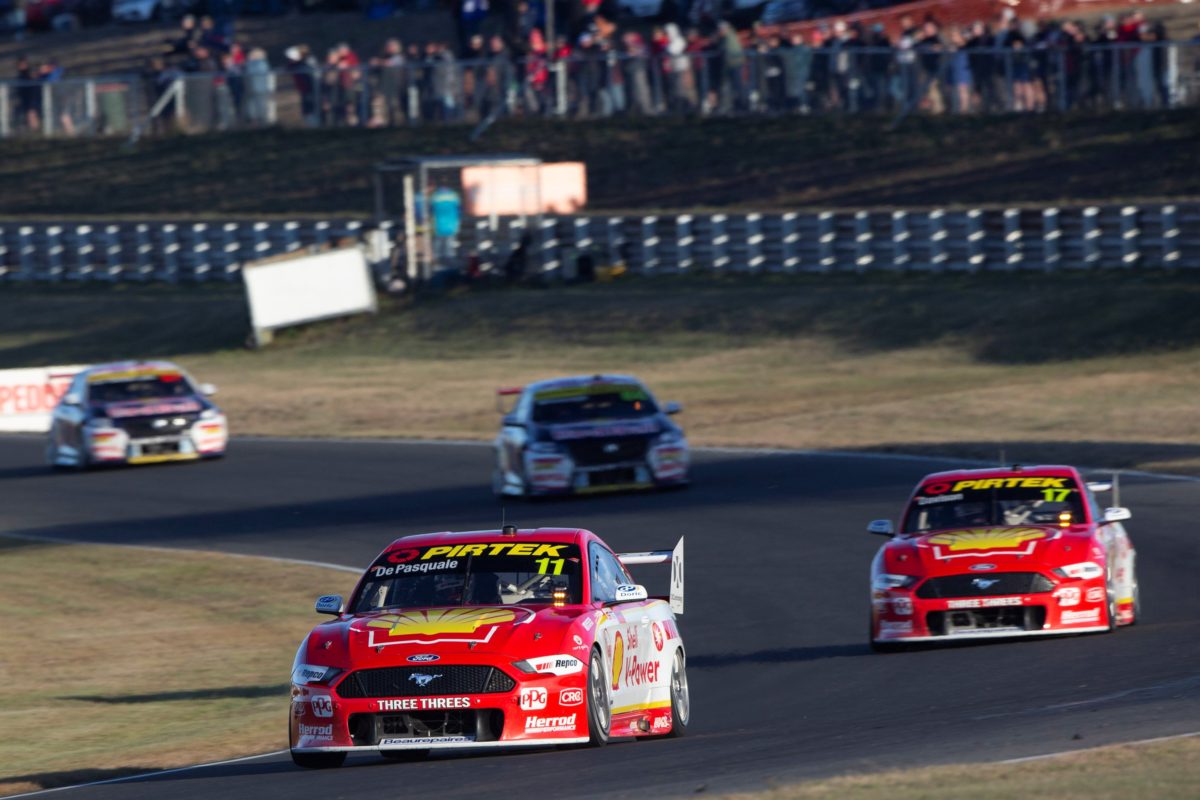 The run home in Race 8

Both DJR pilots were involved in an entertaining battle for the minor placings in Race 8, when they hounded and eventually got past Tickford Racing’s Cameron Waters.

Adding to the stakes, Davison had the Triple Eight cars ranging up behind him, making for a tricky finish.

“[It was] certainly exciting,” he stated.

“I was really happy with the balance of the car, I was super comfortable for the whole last stint, but we all [pitted] early and then you sort of see where it plays out.

“I was behind Anton, and had the Red Bull guys behind me, so it was a bit of cat and mouse for a while.

“As soon as you have a bit of a push, you feel your brakes, tyres go away, so you could see everyone was just sort of playing a few games here and there, but I was sort of thinking right ahead and I was confident Anton was doing the same.

“It’s always tricky because Jamie would have a go at me, so I’d quickly push up to Anton, and he’d do the same to Cam.

“It was just a very tricky situation, because your brakes go away a lot at the hairpin, you lock the rear wheels very easy, and obviously the last person I wanted to hit was [De Pasquale], but Jamie was having a dip at me a few times as well.

“Things went to plan, though, and again, our cars just looked after the tyres and we just worked really, really well together.

“It was good fun hunting Cam down in that second-last lap, just after Anton got through.”

The next event is the OTR SuperSprint at The Bend on May 8-9.