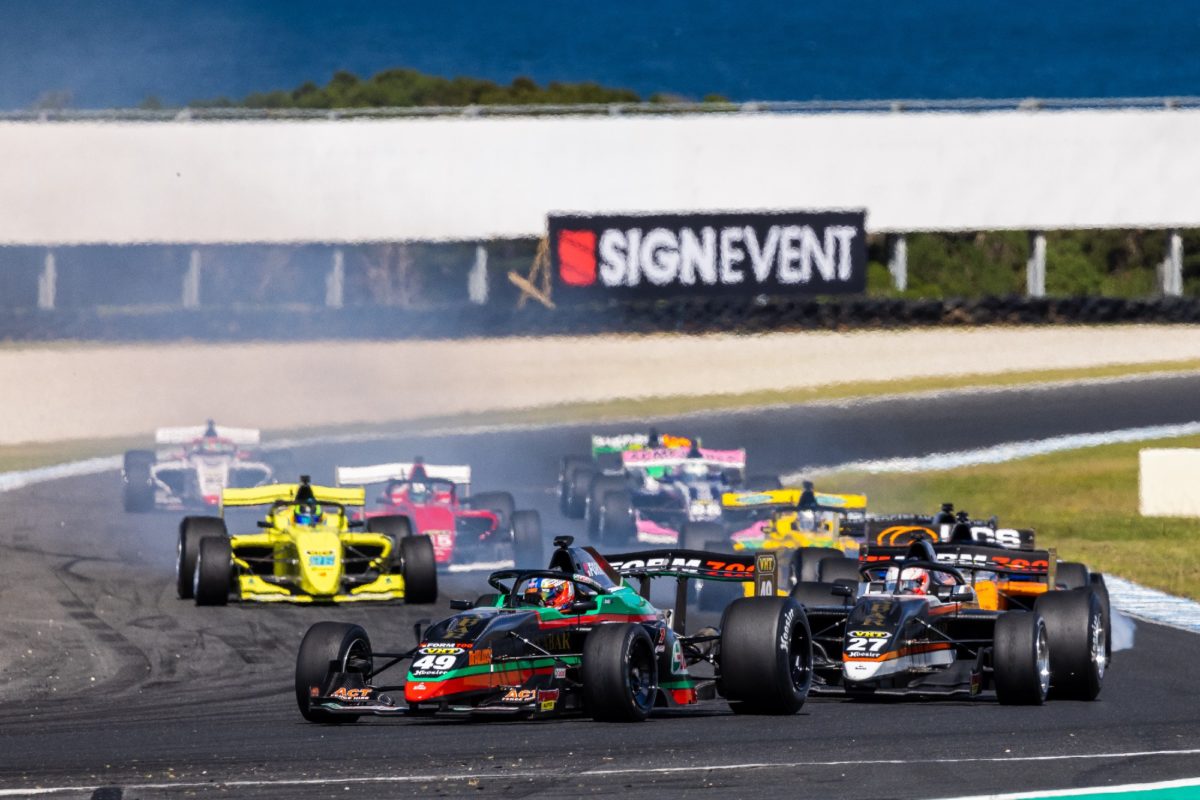 The cars which race in the VHT S5000 Australian Drivers’ Championship have now been bestowed with an official chassis name.

Effective immediately, what have tended to be referred to simply as ‘S5000s’ will go by the designation ‘Rogers AF01/V8’.

‘Rogers’ is a nod to the category’s technical partner, Garry Rogers Motorsport, which developed the specification and built all of the cars currently in existence.

The ‘AF’ stands for ‘Australian Formula’, ‘01’ denotes that the cars are the first generation of S5000, and the ‘V8’ is a reference to the Ford Coyote engines which power them.

While the Onroak-Ligier chassis were produced in the United States by the French firm, Garry Rogers insisted on maximising the Australian-made elements of the cars.

The US-sourced powerplants were developed by Queensland’s InnoV8 Race Engines, while the the Holinger transaxle and MoTeC electronics are all-Australian.

The remainder of the key components, including suspension, uprights, brakes, steering, and wiring loom, were developed by GRM or other suppliers in Melbourne.

Furthermore, S5000’s lineage goes back to the Formula Thunder 5000 concept launched by present day category development manager Chris Lambden, who was inspired by the Formula 5000 category of Australia’s halcyon days of open-wheeler racing.

With the naming of chassis, ‘Rogers’ joins the likes of Brabham, Elfin, Matich, Cheetah, and Mildren as famous Australian open-wheeler identifiers.

“When you look back over the history of Australian Motorsport, some of the most incredible stories come from the people who built and raced their own cars,” said GRM director Barry Rogers.

“It’s pretty special to add the Rogers name to that list with this new era for the Gold Star.

“People look at these cars and think that they are an international open-wheeler, but they are really a showcase for Aussie engineering and what our motorsport industry can do.

“Outside of the chassis and the engine sourced from the USA, everything has been done in Australia and that makes them a very unique racing car with enormous local input and skill behind it.

“As much as GRM played a major role in bringing the S5000 concept to life, it’s important to acknowledge Chris Lambden and his vision to create a modern Formula 5000 race car and the original prototype work that Mike Borland and his team at Borland Racing Development tirelessly worked on.

“We also wouldn’t be in this position without the incredible influence and vision of Brian Boyd, who has been such a great supporter of the category and our sport in general.

“It’s going to be really special for Garry and especially our whole team, who have put in so much time and effort into producing these cars, when the field of cars sporting the name ‘Rogers’ rolls out of pit lane for the final round of this year’s championship in Sydney.”

That event at Sydney Motorsport Park, part of the Shannons Motorsport Australia Championships, will see the Gold Star for the Australian Drivers’ Championship won for the first time since 2014.

Joey Mawson is in the box seat by virtue of his 40-point lead over BRM team-mate Thomas Randle, with two-time Gold Star winner Tim Macrow only three points further back.

That round will unfold on April 30-May 2, before a switch to a ‘summer series’ commencing at some point towards or during the latter quarter of the calendar year.