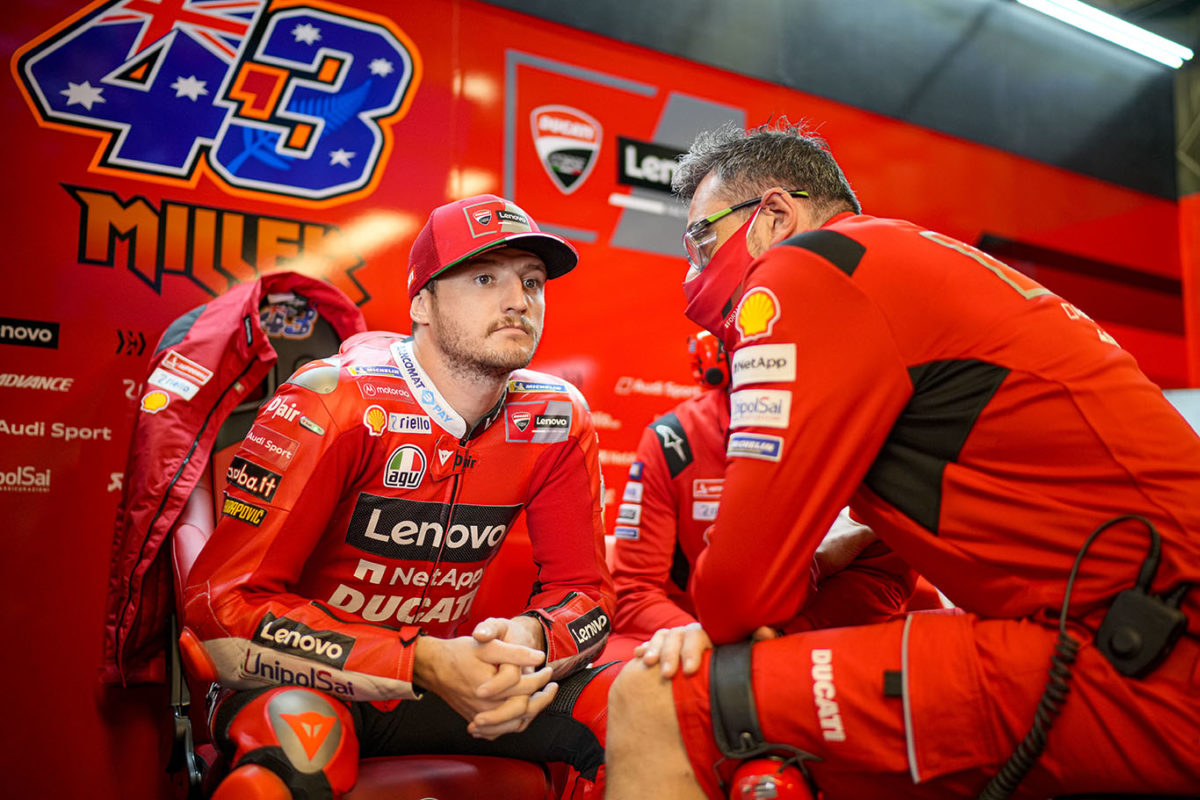 Jack Miller is “in the trenches now” after a crash at Portimao consigned him to a third poor result in as many races to start the 2021 MotoGP season.

Miller was ninth in each of the Losail races, due to a grip issue in the Qatar Grand Prix and then arm pump in the Doha Grand Prix, before the DNF in Portugal.

In his first season with the factory Ducati Lenovo Team, ahead of which he had been identified by many as a championship favourite, the 26-year-old is now 12th in the standings at 47 points off the pace.

It is a stark turnaround from his pre-season form, when Miller broke the all time lap record at Losail, or the consecutive second placings at the end of the 2020 campaign, including at Portimao.

“That’s three races now where things haven’t gone my way, so we’re in the trenches now and I’m trying to dig myself out of it,” wrote the Queenslander in his regular post-round column.

“We have the speed, the bike is fast, and I have to put it all together. Like I said, a simple explanation.

“I’ve been in worse positions before and dug my way out of them, so that’s what I’ll do again.

“Yes, I’ve made it hard for myself but the tables will turn if I keep doing things the right way.”

Miller was involved in a willing contest at the front of the field before he went down on Lap 6 as he braked for Turn 3.

Initially in that stoush was Marc Marquez, who started a race for the first time in almost nine months after going through three operations on his broken right humerus.

The six-time world champion qualified on the second row of the grid and experienced what he termed “an explosion of emotions” when he got back to the Repsol Honda garage after finishing the grand prix in seventh.

“The big story of the weekend was of course Marc being back after he’d been away for so long,” added Miller.

“It was no surprise he was fast, I expected it even from Friday when he was first back on the bike.

“It actually made me smile when I saw him so happy in the garage on Friday about to ride in first practice on the TV, because you know how much this sport means to him, what it means to all of us. We’re all the same in that this is the thing we love and what we want to do.

“When you can’t do it for nine months like him then it’s not an easy thing, especially with all the rehab and recovery he’s had to do.

“To see him back out there doing what he loves and what he’s fantastic at makes us all happy that he’s there.

“It will elevate all of our levels too because he’s the standard we all have to try to match. We all know how extremely talented this guy is and the things he does on a motorcycle.”