It was a breakthrough weekend for the Shell V-Power Racing Team, taking four podiums from the Tasmania SuperSprint. Anton De Pasquale recaps his version of events in his exclusive The Distiller column for Speedcafe.com, presented by Dasher + Fisher.

Sometimes you have got to go backwards to go forwards.

It’s no secret the first two rounds for us were not a walk in the park, but the signs were good from the outset at Tassie.

We put in a lot of thought after Sandown and the decision was made to revert to a car philosophy that had proven successful for us in the past with Scotty and Fabs.

We were able to retreat back to something which I think the team was comfortable would be competitive, and that gave us a platform to build up from.

For the first time this year we rolled out of the truck competitive. It makes all the difference in a quickfire two-day format, to not be chasing our tail.

The result was four podiums for the weekend, two each for Will and myself.

Sunday afternoon was for sure the coolest part of the trip, having both cars finish on the podium. It’s not a one-two, but I reckon that won’t be too far away.

We had really good tyre life all weekend and that came in handy in getting us both past Cam in the last few laps.

It’s a shame we couldn’t jump him earlier, because I really think we could have challenged Chaz at the front.

Chaz was super quick so we mightn’t have got the win, but the margin would have been a lot tighter.

To get my first podium for the team the day before was a bit of a relief, to be honest.

I still kick myself from the first race at Bathurst which probably should have been a podium but it wasn’t, through the fault of my own. 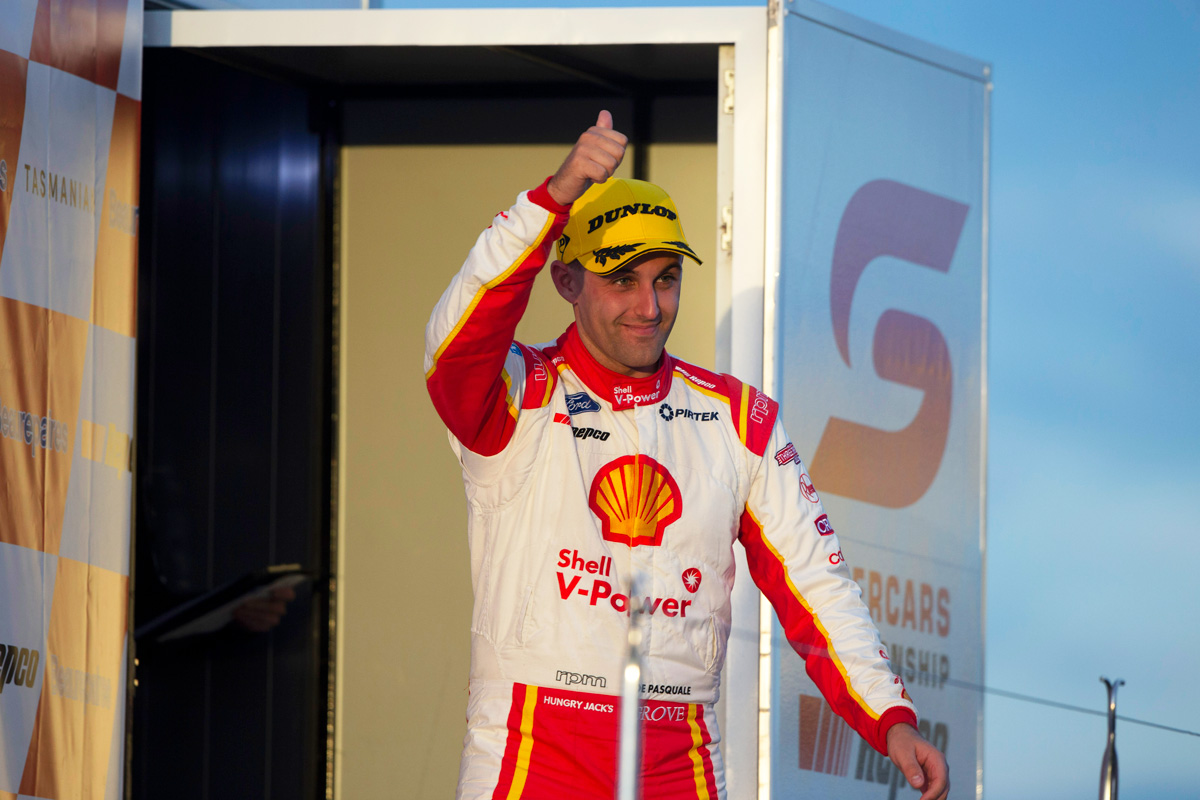 As it turned out we could maybe have had a trophy in every race on the weekend, which shows we’re going in the right direction.

The first Sunday race I got a shocking start. I’m still getting my head around how to get the Shell V-Power Racing Team Mustang off the line in the best way, and Tassie is a pretty good place to try that sort of stuff given that it’s a really short run to the first corner.

My initial launch was actually quite decent but it then bogged down. I only lost a couple of spots but then I got tagged by Le Brocq at the hairpin and rotated.

That made for a long race but we recovered to 13th and our pace in that one gave us confidence that things would turn out alright when we were back on the second row for the finale, and so it turned out.

We’re back up to eighth in the championship and we’ve got the pace to be a fair bit further up than that still. More importantly, we’re now second in the teams’ championship.

The next item to tick off is to get on the top step of the podium. We were just short on outright pace to get the job done in Tassie, but the atmosphere in the team is really good and we’re very motivated fresh off a good weekend at the track.

We now head to a couple of circuits that are usually happy hunting grounds for the Shell V-Power Racing Team so hopefully there’ll be even more to smile about at The Bend next month.