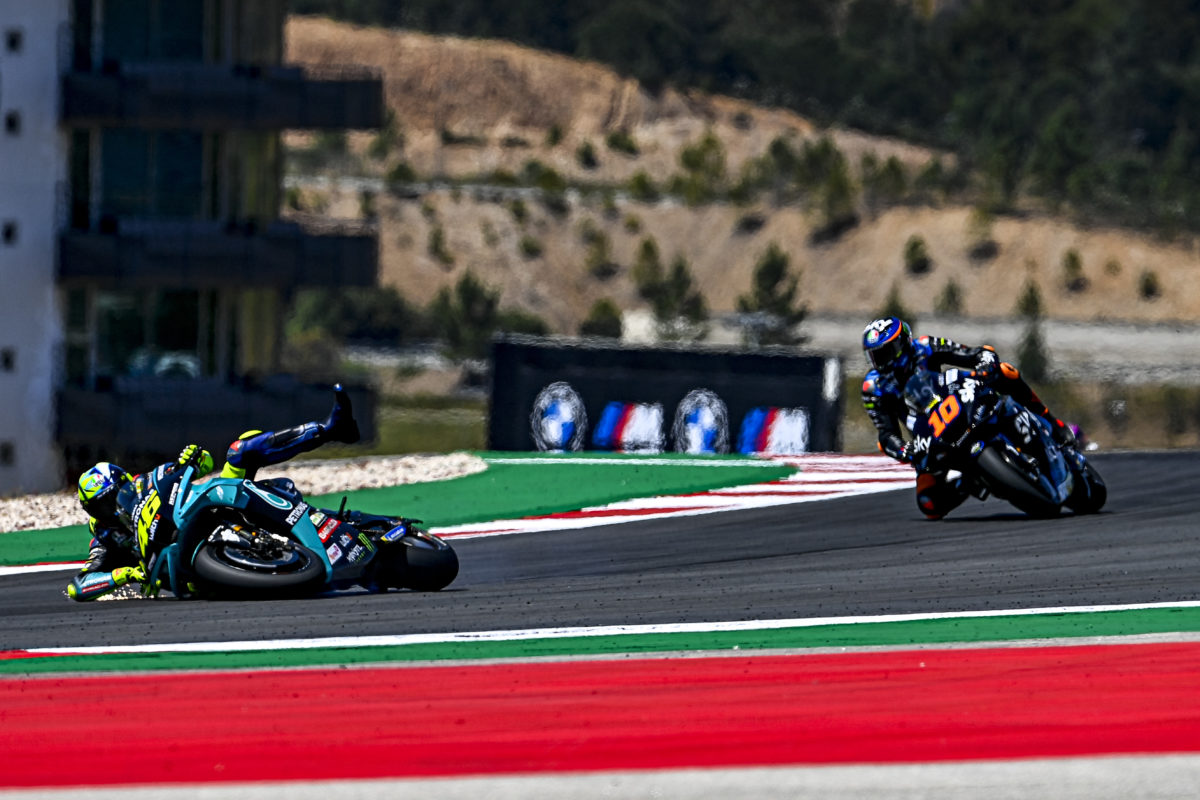 Valentino Rossi has gained confidence after a shocking start to the 2021 MotoGP season despite crashing out of the Portuguese Grand Prix.

The seven-time premier class champion finished 12th in Round 1 at Losail and 16th, one position outside the points, a week later at the same circuit.

He also qualified well back for the second round in a row at Portimao, with 17th on the grid for #46 still an improvement of four positions relative to the Doha Grand Prix.

The spill on Lap 15 of the third race of the season, by which time Rossi had climbed to 11th, meant he dropped to 19th in the championship with just four points to his name.

However, the Petronas SRT Yamaha rider is still looking on the bright side.

“Today I felt better,” he said.

“We changed the set-up, and I was more effective in braking.

“Also, with the hard rear tyre, I had more grip in acceleration.

“Maybe my pace wasn’t bad, but logically it’s difficult when you start from the rear.

“I think I could have finished in the top 10 but unfortunately, I lost the front between Turns 10 and 11. That’s a point where the tyre is under a lot of stress on the right side.

“It was a shame, because I could’ve got some points that would have boosted my morale.” The 42-year-old is currently riding on a one-year contract with Yamaha, which is said by SRT to contain performance clauses regarding future years.

It was in late-2019, when he was coming up to a decision about the two-year contract which concluded last year, that Rossi admitted it would be “better to not renew” if his performances did not improve in 2020.

Asked if he is presently experiencing the most difficult period in his career, Rossi was non-committal, and chose to reiterate that he has gained confidence.

“I don’t know,” replied the Italian.

“Of course, everyone is going really fast, and it’s not easy to be in this situation, but today I felt better on the Yamaha and I wasn’t too far from the group of riders who took the podium. This is why I say that the race has given me confidence.

“Also, on paper, the next tracks are good for me, and I’ll try to be more competitive.”

“Definitely from the qualifications,” he responded about where he needs to improve.

“I struggle a bit to improve my times with the soft tyres. I have to try to start later.

“In the race, on the other hand, I rode quite well.”

The next round is the Spanish Grand Prix, at Jerez, on April 30-May 2.