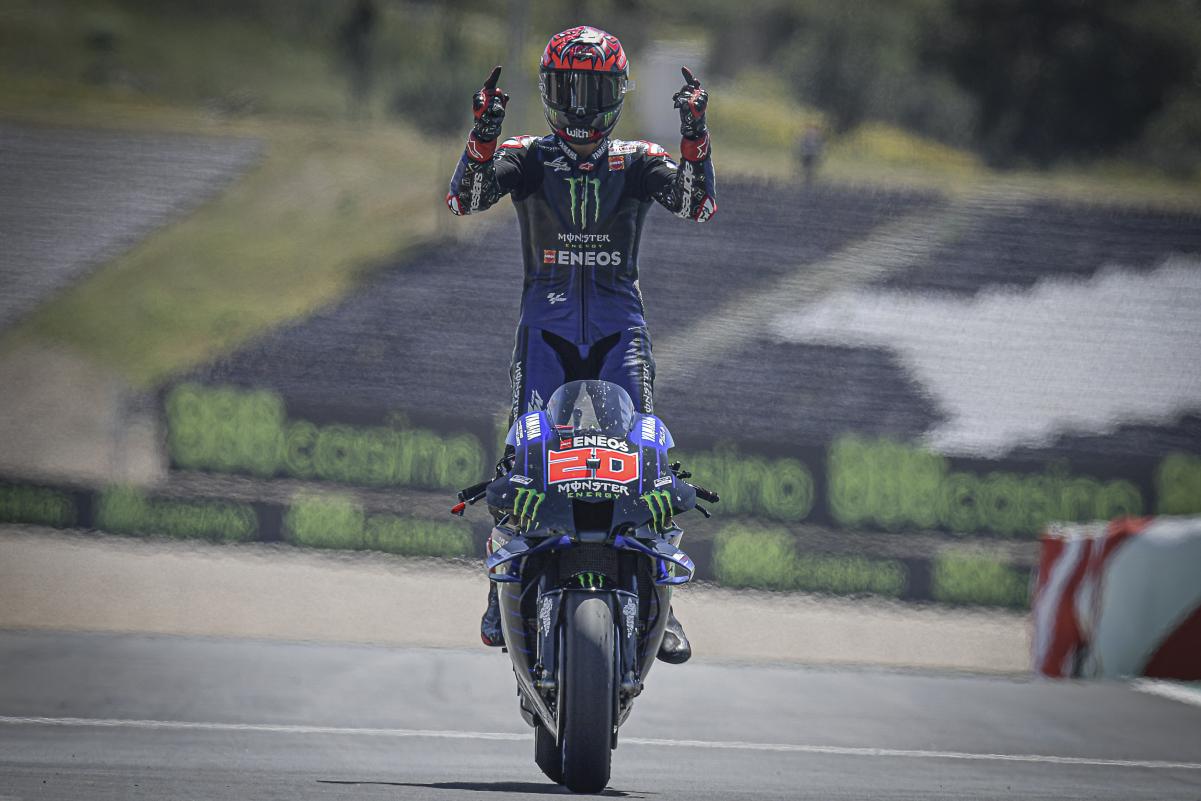 Fabio Quartararo has moved into the MotoGP championship lead with victory in Portugal while Jack Miller was one of several big names to crash out.

Quartararo could not shake Alex Rins until the Suzuki rider went down less than seven laps from home at Portimao, and pre-race points leader Johann Zarco was on for a podium when he dropped his Pramac Ducati a lap later.

As such, it was another Frenchman, on a Monster Energy Yamaha, who took a second straight win while Francesco Bagnaia (Ducati Lenovo) held off Joan Mir (Suzuki Ecstar) in a late battle for the minor placings.

Marquez emerged third from the opening corners while Mir rounded up Quartararo for fifth spot at Turn 3.

Mir passed Miller for fourth when #43 was held wide by Marquez at Turn 5, then got Marquez himself for third through Turn 10/Turn 11.

Marquez touched Mir’s rear tyre at Turn 3 on Lap 2 and dropped to sixth, the moment allowing Quartararo to nab fourth while Miller was a net unchanged fifth.

Quartararo passed Mir for third on Lap 4 at Turn 1, as Marquez continued to slip down the order.

Up the road, Zarco and Rins were chopping and changing position until the Suzuki rider consolidated the lead and the Pramac man ceded third to Quartararo late on Lap 5.

Miller had not long run wide and given fifth to Aleix Espargaro (Gresini Aprilia) when he crashed out in an unusual place, between Turns 2 and 3, on Lap 6.

Zarco found himself in a fight over third position with the other Suzuki, of Mir, as Quartararo went past Rins into Turn 1 on Lap 9.

The top two began to gap the field, trading fastest laps along the way, while Bagnaia made steady progress through the field.

The Italian had lost pole position due to passing a yellow flag on his fastest lap and started 11th, but passed compatriot Franco Morbidelli (Petronas SRT Yamaha) for fifth at the start of Lap 17.

Rins was still going with Quartararo until he crashed on Lap 19 at Turn 5, meaning Bagnaia’s move on Mir seconds later at the tight left-hander was for third.

He pulled off a repeat on Zarco a lap later, just before the Pramac rider lost the front and wiped himself out at Turn 10.

By then, Quartararo was almost five seconds to the good, but Mir was not done.

He caught back up to Bagnaia in the final few laps but there was no way past and the 2020 champion took the chequered flag in third.

Quartararo’s 4.8s victory means he now leads the championship by 15 points, his nearest rival in the standings also being Bagnaia.

Maverick Viñales (Monster Energy Yamaha) ended up 11th having dropped to 20th on Lap 1 and even circulated in the 21st and final position at one point.

He is now third in the championship, 20 points behind team-mate Quartararo, while Miller dropped to 12th.

Rossi crashed on Lap 15 while running 11th and Pol Espargaro pitted after four laps with an apparent technical problem.

Round 4 is the Spanish Grand Prix at Jerez on April 30-May 2.