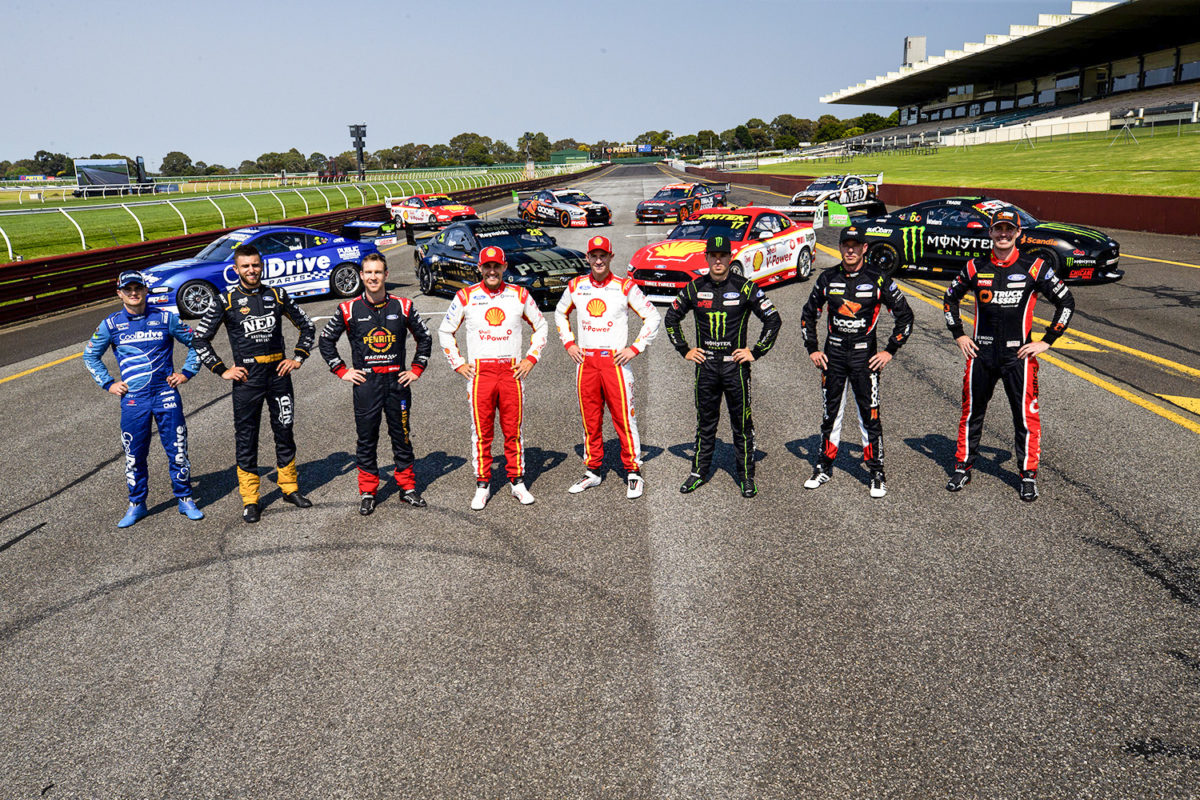 The fleet of Ford Supercars drivers pictured at Sandown

Ford drivers are yet to win in this year’s Repco Supercars Championship but have often looked threatening throughout the first eight races.

Now that Shane van Gisbergen’s unbeaten run has been broken, with Jamie Whincup and Chaz Mostert taking turns on the top step of podium yesterday, in this week’s Pirtek Poll we want to know who you think will draw first blood for the Blue Oval.

Of the eight full-time Mustang drivers on the grid this year, Cameron Waters has looked most likely to claim victory.

The Monster Energy Racing driver showed race-winning pace at the season-opening Mount Panorama 500, but couldn’t convert for reasons beyond his control (first a power steering pump failure and then a strategy miscalculation).

The Sandown SuperSprint promised Waters a lot, but he fell agonisingly short of winning the opening race of the weekend after Shane van Gisbergen came through from 17th to win.

The Red Bull Ampol Racing driver was dominant despite a broken collarbone and ribs, sweeping the weekend while Waters recorded finishes of second, second, and sixth.

Waters’ one-lap pace at the Tasmania SuperSprint again was strong, netting two pole positions on Sunday, but long-run speed went wanting and the best he could salvage were finishes of sixth and two fourths.

It’s been a mixed start to the season for Dick Johnson Racing, but after three rounds Will Davison and Anton De Pasquale have started hitting their stride.

The pair stood on the podium for the first time this season in Race 8 at Symmons Plains International Raceway behind Mobil 1 Appliances Online Racing driver Chaz Mostert.

On their current trajectory, Davison and De Pasquale should be threatening for wins at The Bend Motorsport Park on May 8-9.

As Waters leads the charge for Tickford Racing, James Courtney and Jack Le Brocq have been left in the youngster’s wake.

The pair have season-best finishes of seventh and sixth respectively, flashing just glimpses of that same one-lap speed that Waters has displayed in qualifying.

A breakout debut for the Blanchard Racing Team saw Tim Slade open his account with a front row start in the ex-23Red Racing Ford Mustang, formerly driven by Davison.

The team’s dream-turned-nightmare weekend in Bathurst was well documented, and since switching to a spare chassis, Slade has yet to come close to another front-row start.

The team’s brainstrust is led by two established names of the sport in team manager Brendan Hogan and engineer Mirko De Rosa, who remain optimistic about their chances for 2021.

Then there’s Kelly Grove Racing, who, like Dick Johnson Racing, have been a bit hot and cold in 2021.

Andre Heimgartner and David Reynolds have yet to really hit their stride three events into the squad’s new arrangement.

A third place finish in the wet at Sandown has been the highlight for Reynolds thus far, but remains his sole top five finish this year.

Heimgartner, meanwhile, has a season-best fifth to his credit.

Could Thomas Randle be the shock of the season? The Tickford Racing driver will make three cameo appearances in the Supercars Championship, starting at the next event in Tailem Bend.

Last year’s Super2 Series winner has previously stood on the main game podium, but that was with Lee Holdsworth in the 2019 Sandown 500.

With all of the above considered, who do you think will get the first win for Ford in 2021?