Alex Palou claimed his maiden victory in a tense season-opening IndyCar Series race at Barber Motorsports Park while Scott McLaughlin kicked the year off with a top 15 finish.

Driving for Chip Ganassi Racing, Palou overcame Arrow McLaren SP’s pole-sitter Pato O’Ward on strategy and then held off Will Power to the chequered flag to pick up his first IndyCar win.

The opening lap was marred by a sizeable crash involving five cars, as Josef Newgarden spun in front of the pack.

Newgarden had a twitch through Turn 4 and lost control on the grass, rotating in front of everyone and causing a pile-up as cars were left with nowhere to go.

Ryan Hunter-Reay slammed into Newgarden over the blind rise, with Felix Rosenqvist, Colton Herta, and Max Chilton also caught up in the incident, bringing out a Lap 1 caution. 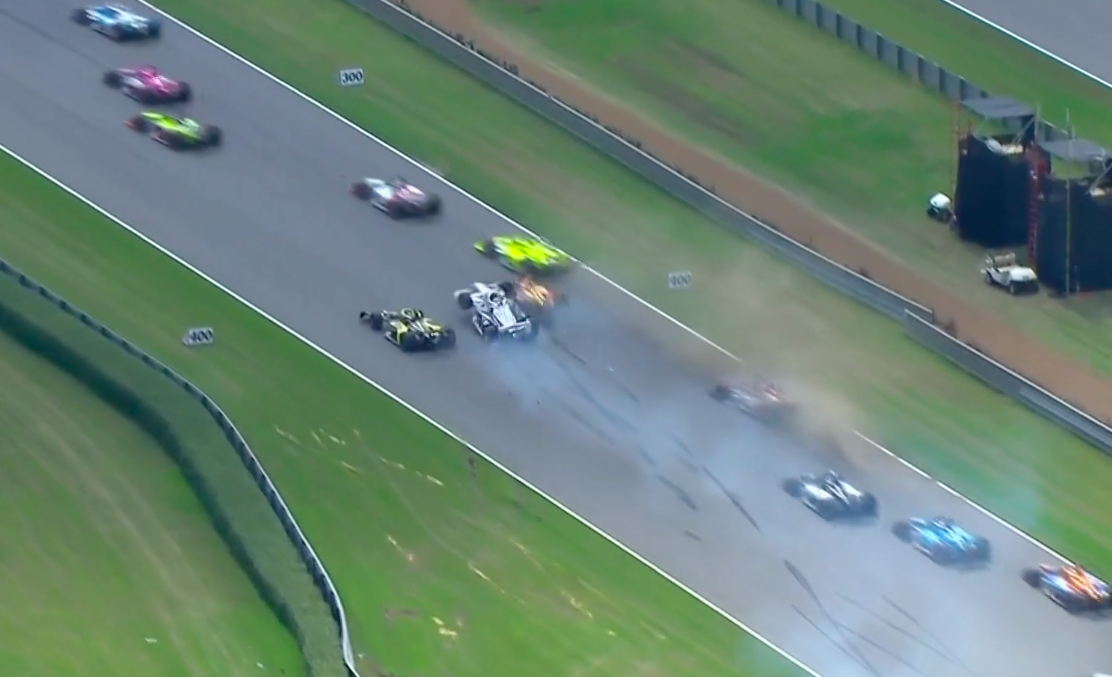 Pole-sitter O’Ward struggled to get his tyres up to temperature on the restart and came under attack from Alexander Rossi, but a second caution after a spin for Chip Ganassi’s Jimmie Johnson cooled things down again.

The leading duo of O’Ward and Rossi both pitted at the end of Lap 18 under green, committing to a three-stop, while Palou, Will Power, and Scott Dixon stayed out to make a two-stop strategy work.

It made a difference for Palou who stopped on Lap 31 and was able to make a successful overcut to rejoin ahead of O’Ward in the effective race lead.

Palou held O’Ward up for a couple of laps before the Mexican cleared the Spaniard and set about building a gap in anticipation of the next round of stops.

O’Ward made his second stop on Lap 43 for another set of the hard compound tyres, but had an awkward moment on track when he was shouldered out of the way by Sebastien Bourdais, running on a different strategy.

Neither driver suffered damage in the unnecessary contact as O’Ward continued to manage his numbers with one more stop to go.

Once Palou made his second and final stop on Lap 61, O’Ward went into full attack mode before diving in on Lap 67 for his third and final tour down the lane.

Naturally, with one less stop, Palou cycled into the lead but had an 11-second advantage and three-car cushion to O’Ward with 25 laps to go.

The McLaren driver managed to clear Marcus Ericsson for fourth but Dixon was much further up the road.

At the head of the field, Power sat comfortably in second position and started to close down the seven-second gap to leader Palou.

In the final five laps, Palou became stuck behind a back-marker and the gap came down to under a second on the last lap, however, the Spaniard was able to hold on for the victory.

Power fell 0.4s short at the end of 90-laps but last year’s series winner settled for second, while Dixon made it two CGR cars on the podium in third.

O’Ward washed up fourth, a further one second back, while Bourdais finished fifth, having started 16th.

Romain Grosjean was the best of the rookie drivers in 10th for Dale Coyne Racing w/Rick Ware Racing.