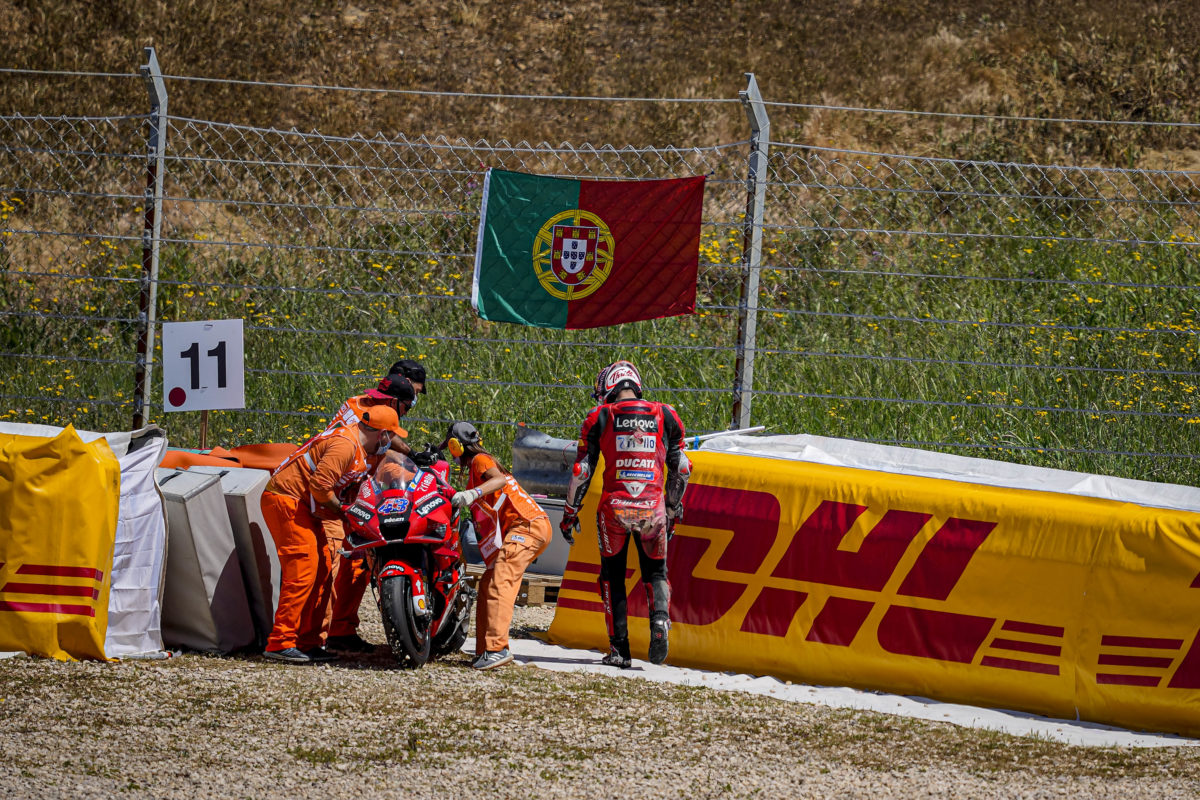 Jack Miller has explained how it came to be that he crashed out of the Portuguese MotoGP race.

Miller was running sixth when he dropped his Ducati between Turns 2 and 3 on his sixth lap around the Algarve International Circuit.

The Queenslander, who had run wide and ceded a position to Aleix Espargaro at Turn 1 on the preceding lap, admitted fault for the final blow.

“Definitely, this is not the way we had hoped to end the weekend,” said Miller, who was full of confidence after qualifying fourth.

“I felt strong today, and after a good start, I knew I had to start pushing.

“Unfortunately, I got very close to Aleix Espargaro and braked late, asking too much of the front tyre. The crash was completely my fault.”

The crash did accelerate Miller’s recovery from the arm pump surgery he underwent just after the preceding grand prix, however.

Ducati Corse revealed post-race that the spill pulled the stitches out of his right arm shortly before he planned to have them removed anyway.

The Aussie was planning to remove the stitches soon, but apparently, he won’t need to bother the doctor as they came off by themselves with the crash 😅 Not funny at all! 😱 But we know you are a real warrior, @jackmilleraus 🦾 pic.twitter.com/RbDCdOPXZd

Miller had finished ninth last time out at Losail, and the same on the preceding weekend at the Qatar circuit.

Failure to score points in Round 3 leaves the 26-year-old 12th in the championship, early in a season before which he had been widely tipped as a title favourite.

He is now 47 points behind Fabio Quartararo, who moved to top spot on the points table after wins in the last two races.

“The last three weekends have been quite difficult, but I have been through much more complicated times in my career,” said Miller.

“Now, we have to keep doing our job well, trying to stay focused to get better results already in the next race.”

Round 4 is the Spanish Grand Prix at Jerez on April 30-May 2.