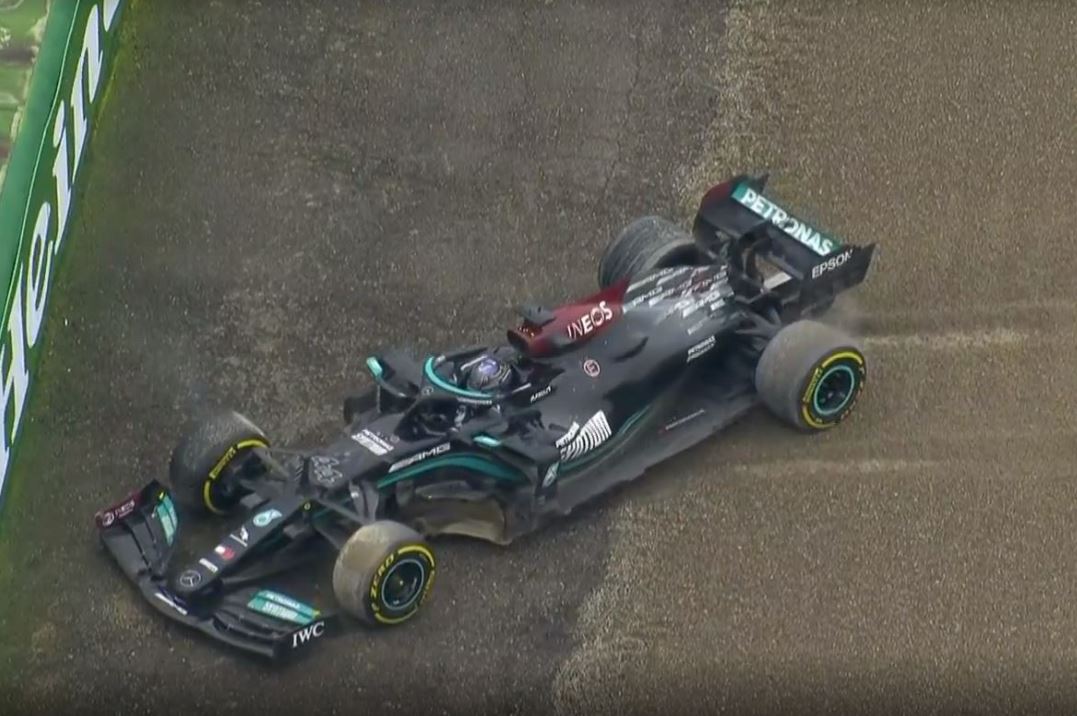 Lewis Hamilton in the gravel at Tosa Picture: Fox Sports

Lewis Hamilton has explained why he slid off the road midway through the Formula 1 Emilia Romagna Grand Prix.

An off at Tosa left the Mercedes driver in the gravel on Lap 31, before nosing into the tyre barrier as he tried to recover.

He was ultimately forced to reverse out of the gravel, dropping a lap as he toured back to the pits to replace the broken front wing.

Hamilton had been running second at the time, but dropped to ninth in the order as a result.

The incident occurred soon after he and race leader, Max Verstappen, had swapped to slick tyres.

Starting in wet conditions, the cross over point had been reached just a handful of laps earlier.

Trailing Verstappen by two seconds prior to their stops, Hamilton had stayed out an extra lap in an effort to overcut the Red Bull.

The strategy didn’t pay dividends as conditions had swung too much, and he ultimately conceded time versus his rival.

Again in pursuit of Verstappen, Hamilton came unstuck after moving onto a wet patch of road as he worked his way through traffic. 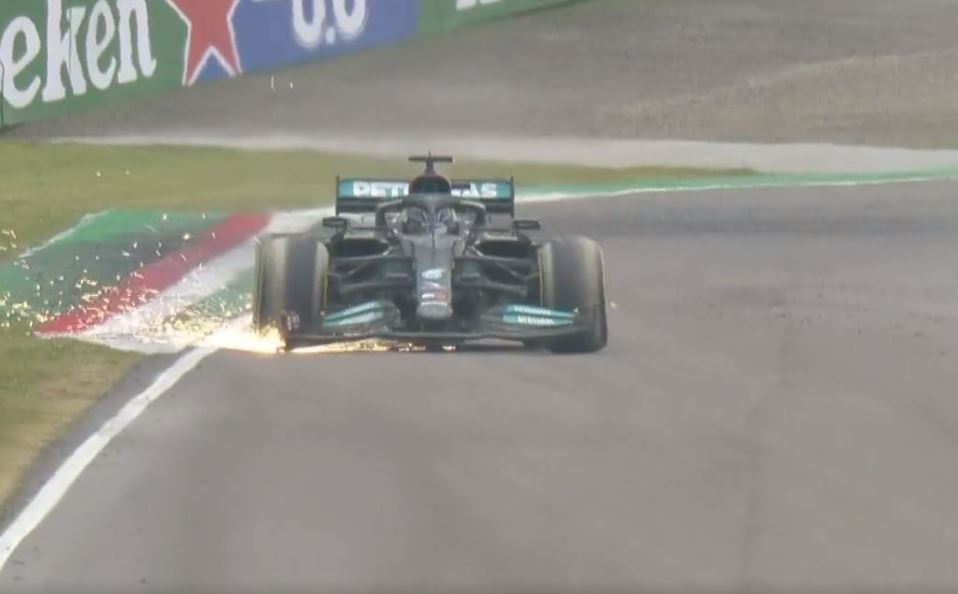 Hamilton brandishing the scars of his excursion Picture: Fox Sports

“There was only a dry line, one dry line, and I guess [I was] in a bit too much of a hurry to get by everyone,” Hamilton said.

“I came on to the inside and I could see it was wet and I was trying to stop, but the thing wouldn’t stop and sent me off.

“A bit unfortunate, but I’m really, really grateful that we got to get going again, and to get some points for the team is really important.”

Picking up fastest lap as part of his recovery, Hamilton still heads the drivers’ championship, though his margin has been reduced to just a single point.

His charge back to second was aided by a red flag period, triggered after a hefty crash between George Russell and Valtteri Bottas at Tamburello soon after Hamilton had recovered from the gravel trap at Tosa.

The stoppage allowed Mercedes to assess and repair any damage to Hamilton’s W12 – such as the broken front wing end fence he’d sustained while battling Verstappen on the opening lap.

It also afforded him the opportunity to regain the lead lap as lapped cars were sent around to the back of the Safety Car line for the restart.

Hamilton admitted his championship position was not a consideration during the interruption.

“I was just trying to get over the gutting kind of feeling it is when you make a mistake and just moving on from it and just learning from it real quick, you don’t have time to dwell on it,” he said.

“So that’s what I did; got back into racing spirit.

“I didn’t know whether or not we’ll be able to overtake because again, offline was going to be wet, but we still had some really good fun battles with all the guys.”

Hamilton’s rise through the field saw him ease by Yuki Tsunoda at the race restart as the Japanese driver spun off.

He picked up a spot from Sergio Perez in similar fashion, before having to race his way through Lance Stroll, Daniel Ricciardo, Carlos Sainz, Charles Leclerc, and finally Lando Norris.

It saw him end the race more than 20 seconds in arrears of Verstappen, but maintain his championship advantage courtesy of a point for fastest lap.

“Congratulations to Max, you did a fantastic job today and just solid work from him,” Hamilton said.

“Also to Lando know, what an awesome job, it’s so great to see McLaren back up there.

“On my side, it was not the greatest of days – first time I’ve made a mistake in a long time but I’m grateful I was able to bring the car home still.”