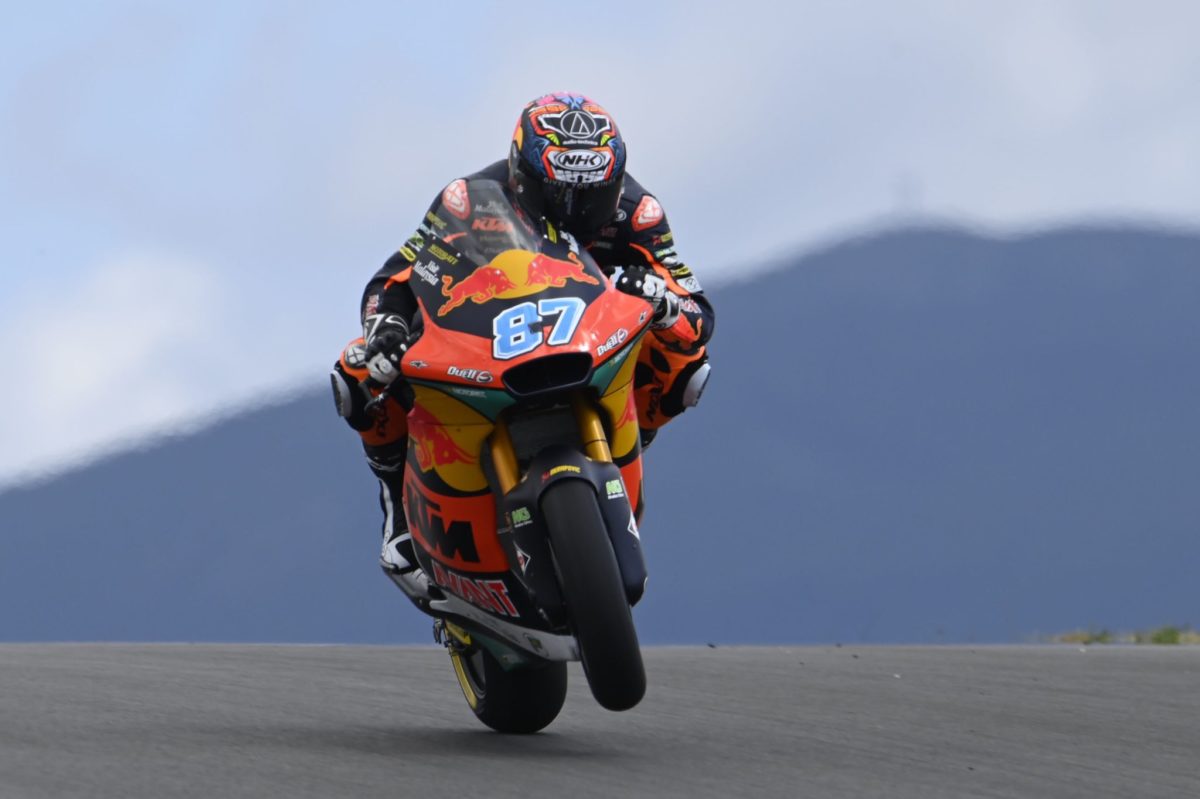 Remy Gardner has moved into the Moto2 championship lead after finishing on the podium in a Portuguese Grand Prix won by Red Bull KTM Ajo team-mate Raul Fernandez.

Gardner finished third at Portimao, his fourth straight podium dating back to his first grand prix win at the same circuit in last year’s finale.

He had trailed Sam Lowes in the standings but the Briton, who won the opening two races of 2021 at Losail, did not make it past the first corner in Portugal.

Gardner led the field down the hill when the lights went out while Lowes came in hot under brakes and, though he managed to avoid nailing the Australian at Turn 1, he also highsided off his Elf Marc VDS machine.

It was therefore #87 out the front before Marco Bezzecchi (Sky Racing Team VR46) briefly took over the lead on Lap 3 of 23 and reclaimed it on Lap 4.

As the Italian built a gap, Joe Roberts (Italtrans), Aron Canet (Solunion Aspar), and Raul Fernandez joined in on the fight over the minor placings.

Gardner had already been passed by Canet when he dropped two spots more to fifth in running wide at Turn 3 on Lap 10.

When Bezzecchi and Canet duelled over top spot as Lap 10 became Lap 11, they both ended up wide at Turn 1 and were mugged by Roberts.

The latter enjoyed a spell of several laps in the lead while a ragged Gardner invited pressure from Xavi Vierge (Petronas Sprinta) and Augusto Fernandez (Elf Marc VDS), who ran just outside the top five.

When Roberts ran wide at Turn 1 on Lap 19, second spot fell to Raul Fernandez, who then dragged past Canet at the start of Lap 20.

As the new race leader pulled away, Bezzecchi faded and Gardner rejoined the contest for the minor placings.

Taking advantage of the final lap stoush between Canet and Roberts, Gardner elbowed his way past the latter at the second-last corner of the race to pinch third.

Fernandez took the chequered flag 1.600s ahead of Canet and is now second to Gardner in the championship at four points back.

Lowes dropped to third in the championship, six points in arrears of Gardner, on the way to the Spanish Grand Prix at Jerez on April 30-May 2.