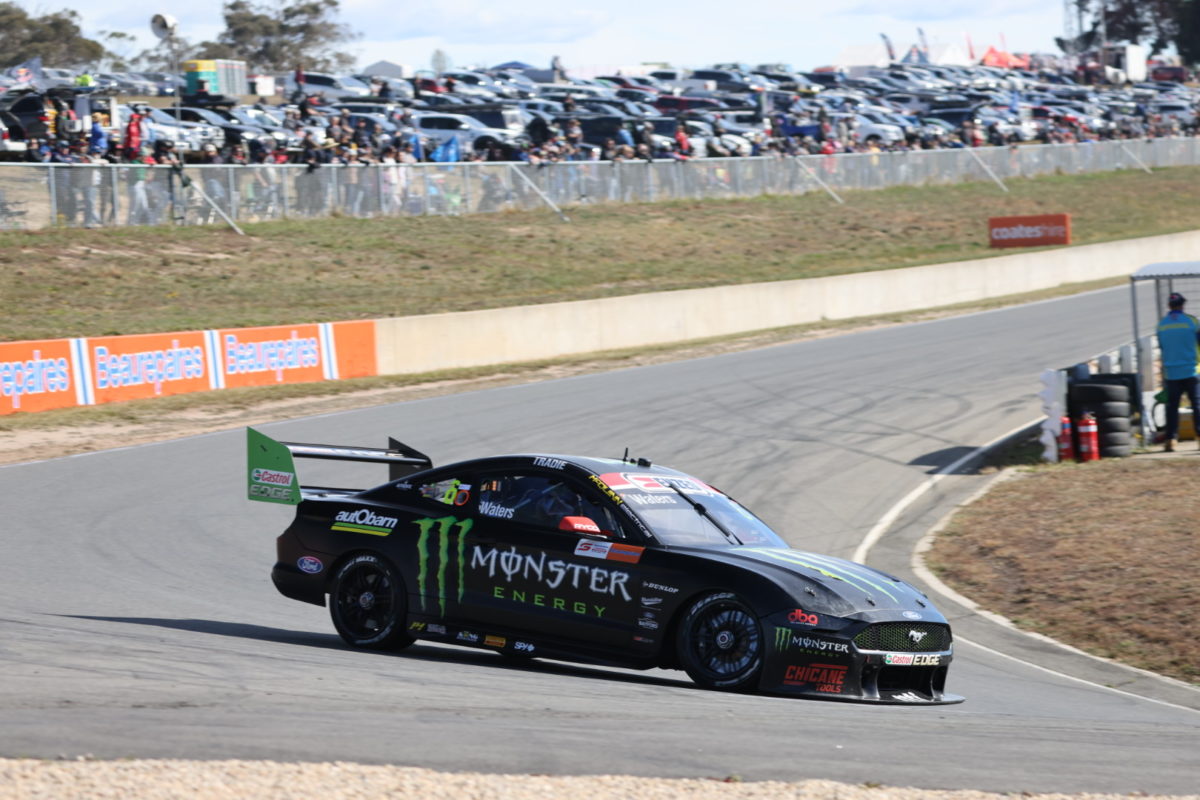 Cameron Waters has qualified on pole for both Races 7 and 8 of the Repco Supercars Championship at the Beaurepaires Tasmania SuperSprint.

In the first Sunday running of Supercars’ new split qualifying system, Part A, which included Waters, had the run of things in both sessions at Symmons Plains.

The Tickford Racing driver is due to share the front row with Triple Eight Race Engineering’s Jamie Whincup for Race 7, and Walkinshaw Andretti United’s Chaz Mostert at the start of Race 8.

Championship leader Shane van Gisbergen, who was in the A group, put the #97 Triple Eight entry sixth on the grid for the day’s first 44-lapper and seventh for the latter.

Said Waters after both sessions had been completed, “Did a little bit better job myself and I think the track was a little bit quicker as well.

“Those two things combined obviously made us go a little quicker, it’s so tight out there.”

He remains wary of the Triple Eight duo but is encouraged by the fact that van Gisbergen, still unbeaten in six races so far this year, has to dig himself out of lower than expected grid berths in both encounters.

“Our race car probably isn’t quite as strong as theirs, hopefully them starting back a bit will help us,” added Waters.

“They’ve got a bloody fast car in the races. I think we’ve made it a little bit better overnight but we’re just going to have to wait and see.

“We’ve changed a fair bit [on the car]. We’re obviously getting beaten so we need a little bit more; tried a few things overnight, I think it’s a little bit better because usually the qualifying car is good and in the races it’s no good.”

Waters topped Part A of Qualifying for Race 7, the faster half of the session, in his #6 Monster Energy Mustang although Whincup (#88 Red Bull Ampol ZB Commodore) was second overall having been quickest in Part B.

Of the earlier runners, Will Brown (#9 Ozland ZB Commodore) was first into the ‘fifties’ with a 50.8994s in the penultimate of eight minutes.

Will Davison (#17 Shell V-Power Mustang) then fell just shy with a 50.9066s and van Gisbergen (Red Bull Ampol ZB Commodore), not far behind on track, was slightly slower again on a 50.9091s.

Van Gisbergen appeared to not go for another flyer right at the end but Waters pulled out a 50.7634s just before the chequered flag to top the first half of the session.

Similarly, the Part B runners made no serious impact on the timing screen until the final two minutes, when Anton De Pasquale (#11 Shell V-Power Mustang) took up second overall with a 50.8965s.

Whincup then jumped from ninth to second just before the chequered flag with a 50.8660s, while Scott Pye (#20 DeWalt ZB Commodore) was the only other driver from Part B to break up the top 10, in ninth.

Predictably, the five-minute hit-outs which formed Qualifying for Race 8 were single runs for each driver, most of whom did one serious flyer.

Mostert pulled out a very tidy 50.5808s, on roaded front tyres, in the final two minutes of Part A of the session, but Waters still managed to better him in clocking a subsequent 50.5622s.

The top 10 was again split seven-three in favour of Part A once the second half of the session wrapped up.

Whincup went again and scrounged one spot by clocking a 50.7145s, bumping team-mate van Gisbergen onto a fourth row which he will share with Part B runner David Reynolds (#26 Penrite Mustang).

Fabian Coulthard ended up 13th all told despite the #19 Local Legends ZB Commodore having to be towed back to the pits at the end of Part A.