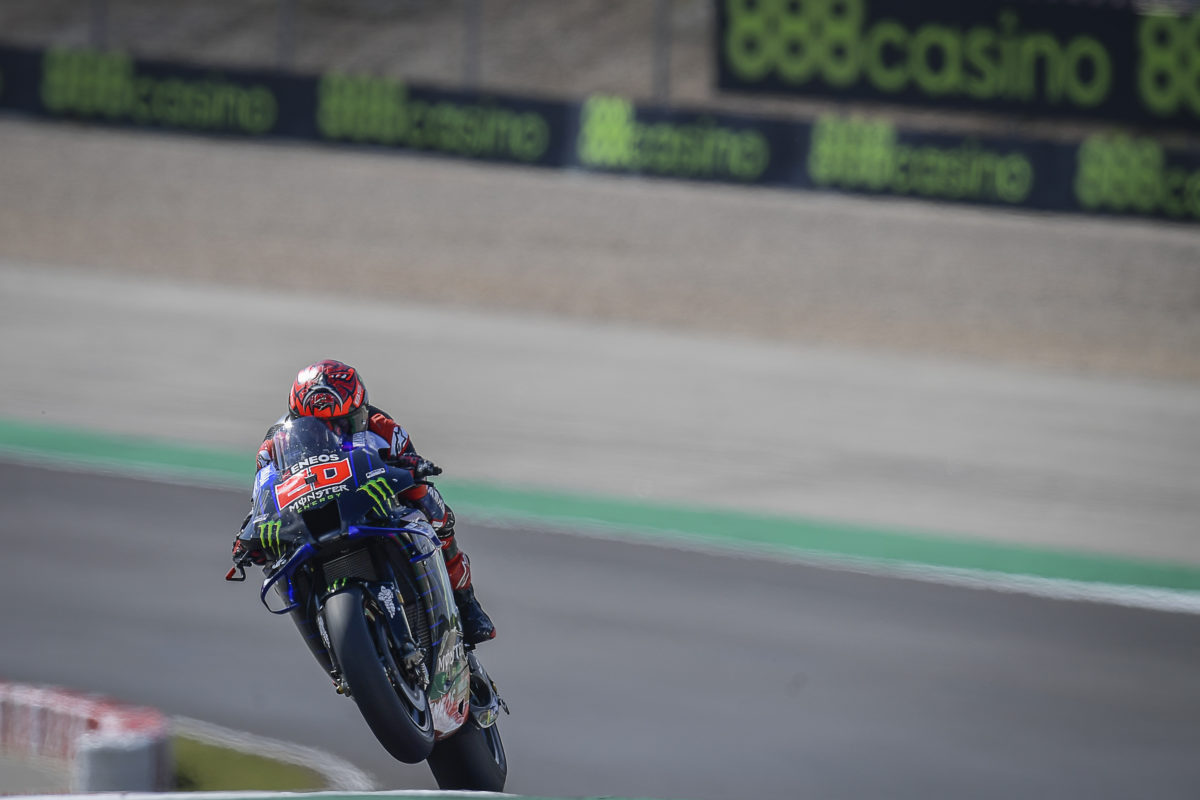 Fabio Quartararo has qualified on pole position for the Portuguese MotoGP after Francesco Bagnaia had a sizzling lap time cancelled due to a yellow flag.

Bagnaia looked to have smashed the all time lap record at Portimao when he set a 1:38.494s in the final minute of Qualifying 2.

However, he had passed a yellow flag triggered due to a crash for Miguel Oliveira, meaning the time was lost per MotoGP regulations and the #63 Ducati Lenovo Team entry was dumped all the way back to 11th.

Instead, it is last-start winner Quartararo who will take up pole position on Sunday afternoon (local time) thanks to his 1:38.862s, which is now the official all time lap record.

Joining the #20 Monster Energy Yamaha on the front row will be Alex Rins (Suzuki Ecstar) in second and championship leader Johann Zarco (Pramac Ducati) in third.

Row 2 will be Jack Miller (Ducati Lenovo) in fourth, ahead of Franco Morbidelli (Petronas SRT Yamaha) and Marc Marquez (Repsol Honda), in his first round back from injury.

Quartararo had bowled out a new fastest lap of the weekend at the start of his first run when he clocked a 1:39.028s.

Bagnaia, however, lost that lap also, meaning the front-runners at the end of the first runs were Quartararo, his old team-mate Morbidelli, and Joan Mir (Suzuki Ecstar), the latter of whom came through Qualifying 1.

Quartararo started his second run with the 1:38.862s to consolidate his hold on first position, while Miller moved to second with a 1:39.061s.

Zarco had crashed in the sixth minute but managed to ride back to the pits and would usurp his Ducati stable-mate with a 1:38.991s in the 15th and final minute of Qualifying 2.

Bagnaia vaulted from 11th to the top just before the chequered flag and was cruising back to pit lane when word came through that he would be sent back to the middle of Row 4, ultimately as a result of the fast spill for Red Bull KTM’s Miguel Oliveira at Turn 9.

That meant that Rins’ late 1:38.951s, which initially put #42 third on the timing screen, was good enough for second spot and Zarco was back up to third.

Miller ended up fourth with no improvement on the aforementioned time, while Morbidelli is a position behind after achieving a best of 1:39.103s.

Marc Marquez also had to go the long way through qualifying and sat out the first runs of the latter stanza before setting a 1:39.121s on Bike #93.

Also having multiple lap times cancelled was Maverick Viñales, who could only put the #12 Monster Energy Yamaha into 12th position.

Q1 was topped by Marc Marquez with the 1:39.253s which he set while following Mir around the circuit at the end of his first run.

Mir was second-quickest when the track went quiet and subsequently improved to a 1:39.302s to secure passage to Q2.

Takaaki Nakagami (Idemitsu LCR Honda) did not ride in qualifying amid doubts over his fitness after a spill in Free Practice 2, while Jorge Martin (Pramac Ducati) has already been withdrawn from the weekend due to a crash in FP3 which saw him sustain head, right hand, and right ankle injuries.