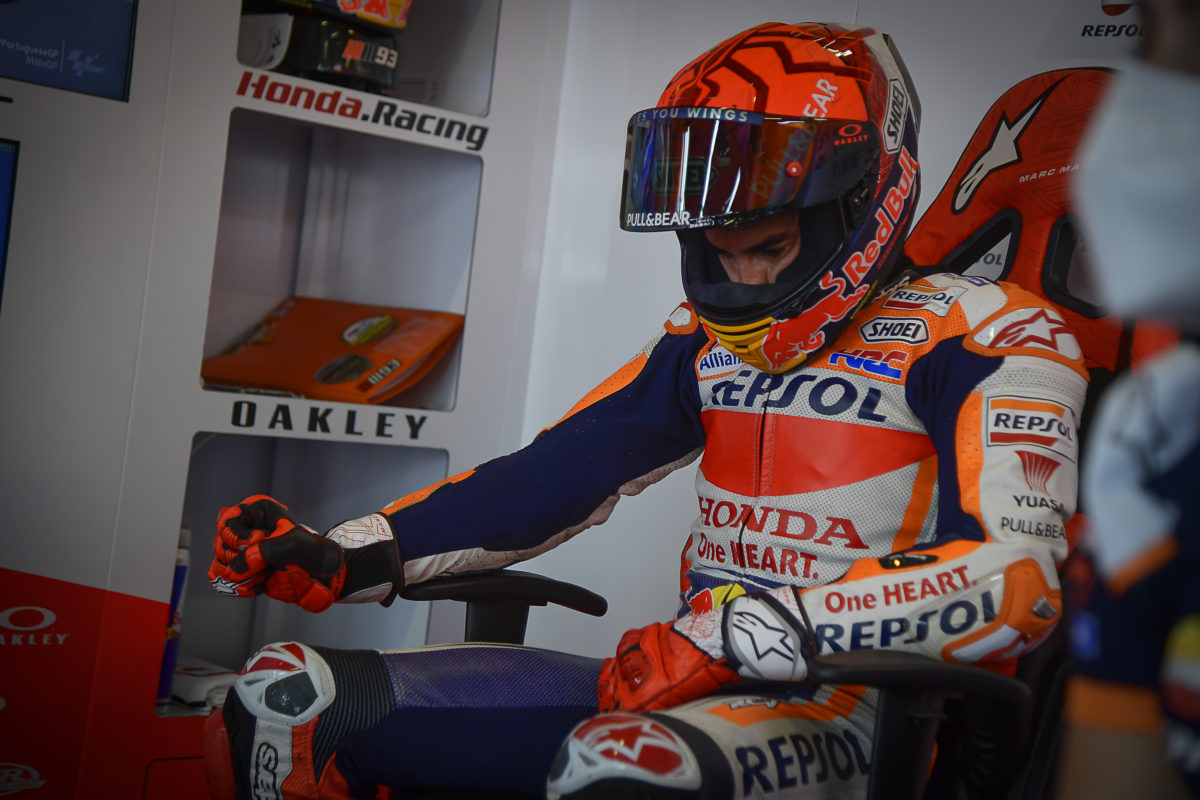 Marc Marquez predicts that he “will suffer” in his first race back after breaking his right humerus, tonight’s Portuguese MotoGP.

Marquez qualified sixth for the 25-lap affair but, as he forecast after Friday practice, the arm which he broke almost nine months ago is beginning to cause grief.

Exacerbating the problem is that Portimao, being a clockwise circuit, is comprised predominantly of right-handers.

The Repsol Honda rider is currently significantly weaker on one side than the other, making it difficult to negotiate the majority of corners, and has been feeling fatigued.

“Of course, I feel worse today than yesterday,” he said.

“This is something that already the doctors and the physios expect and is a natural thing. They say that tomorrow [Sunday] should be worse but we will see.

“The most important thing is the bone is good, I don’t have pain there. But the muscles, the fingers, the elbow, the arm pump, is where I’m struggling more now.

“It’s lack of muscle, power. For example, in the gym I’m working with different weights on the left and right. I cannot have the same weights on the right arm.

“Nearly all the corners here are on the right,” he added.

“In the left corners, I start to feel the front tyre. I am playing and I like it. But in the right corners, still I’m pushing too much on the brakes.

“On the brakes, which is where you can play with the front tyre, the position of the body is not the correct one. I cannot load the front and I cannot push with the arm. So this is something where I’m losing a lot.

“For example, in Sector 4, in the two long corners I cannot push. But we know, and also the team know, that now maybe we need to set up the bike in one way and then when I will be ready to push, we will set-up the bike in another way.

“The question mark is in the race; 25 laps, it will be very long.

“I will say that I’ll try to enjoy it, but I won’t enjoy it. I will suffer. But we already knew this coming here to Portimao.

“So tomorrow I’ll suffer, but then next week I can recover, then Jerez [Spanish Grand Prix, Round 4] be a little bit stronger.”

Officially, Marquez’s 1:39.121s meant he missed out on pole position by barely more than a quarter of a second despite having had to come through Qualifying 1.

He topped that first stanza with a 1:39.253s from right behind Joan Mir’s Suzuki at the end of his first run, something which displeased the 2020 champion.

Among the reasons for Mir’s ire was the fact that, in waiting for a tow, Marquez cost him one of his hot laps. 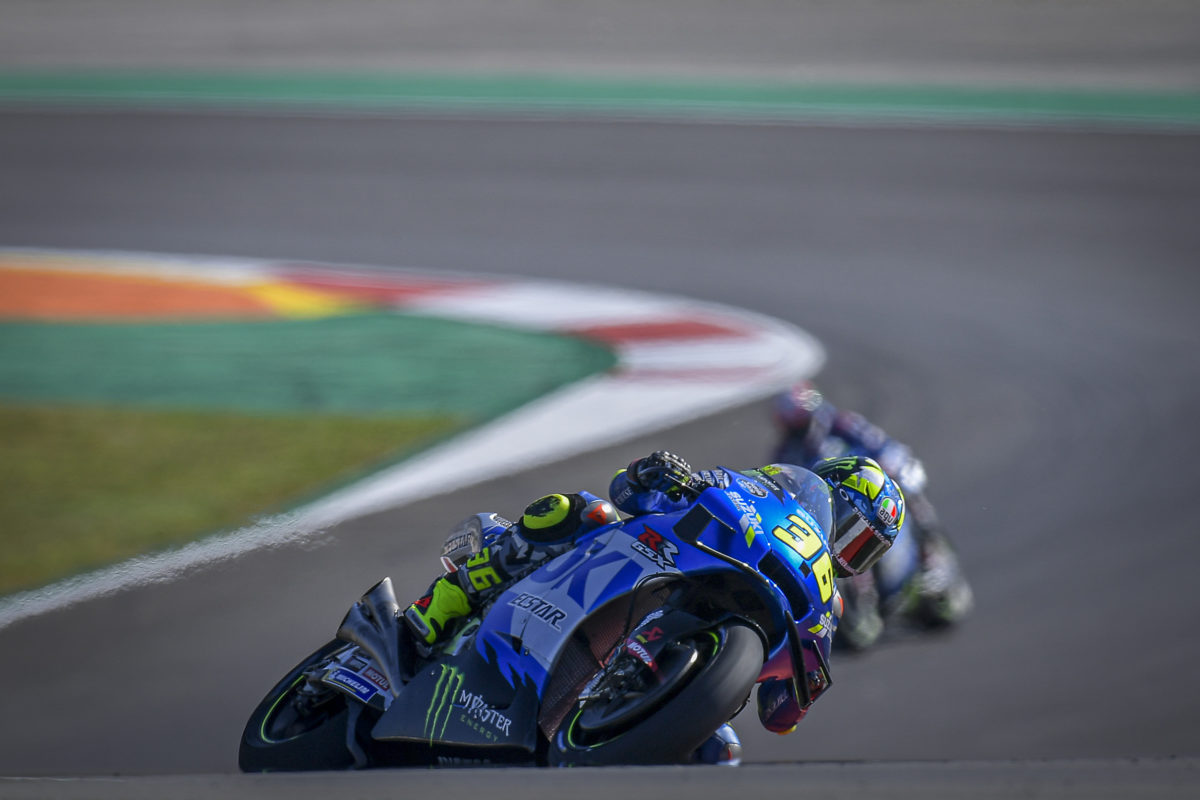 “We normally don’t like it if someone is following us in that way,” said #36.

“But it’s like this; we know Marc always likes to play these types of games.

“The problem is, if we stop, then he’ll stop and it can make a dangerous situation. It’s better to push in front and then that’s it.

“I did my thing and he has not made me nervous at all. I have done my time as well, given the maximum and it is what it is.

“But he annoyed me on the first lap because he started slow, I ran into him halfway down the track and I have already lost my lap. Then I started to push and he took advantage of my tow.

“In Moto3 they penalise you for this and surely in Moto2 as well, but in MotoGP not yet.”

Marquez countered that he was not especially slow on that initial lap, and that seeking a tow is not uncommon.

“At no time did I slow down more than normal,” claimed the Catalan.

“I think the first lap I did in Q1 was two or three seconds slower than a normal time.

“I know that it makes a rider angry when you do it, but they have done it to me many times when I was fully fit. Now I needed it, I have done the whole weekend riding alone until then.

“In Q1, I needed to know where I was losing and I followed another bike, and I chose the world champion, the one who was riding the best in Q1.

“I could have chosen my brother too [Alex Marquez, Castrol LCR Honda], who would have kept quiet! I have chosen the best; I have come out of box, we have met [on track] and I have done it.

“Then in Q2 with [Mir’s team-mate Alex] Rins, something similar happened, but I have not followed him so closely either, because I didn’t think that I was going so fast. I only did a 1:39.4s.

“This is motorcycle racing and when you have a nine-month injury without being on the track, you try to learn from every corner.”

Rins went on to qualify on the middle of the front row while Mir, who joined Marquez in getting out of Q1, wound up ninth.