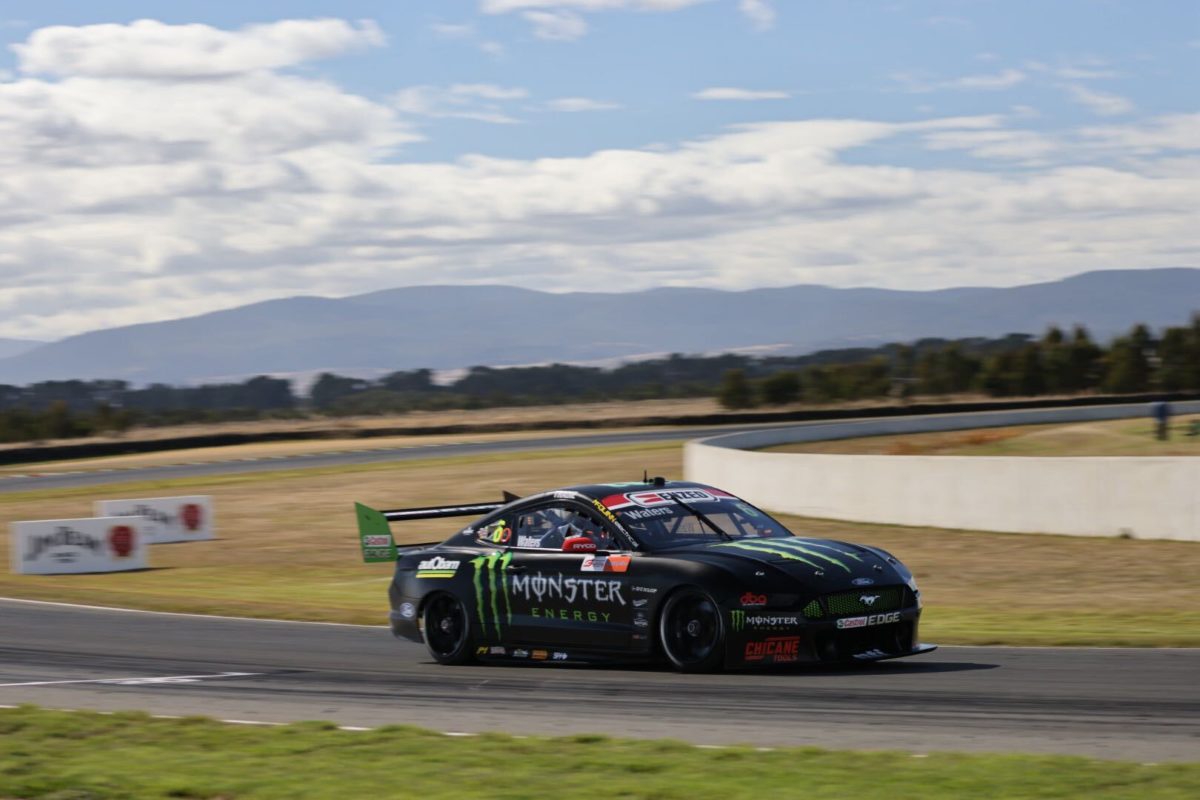 Cameron Waters has set the pace again in the second and final practice session for the Beaurepaires Tasmania SuperSprint.

Just as he had done in Practice 1 at the third event of the Repco Supercars Championship, Waters stole the top spot from one of the Dick Johnson Racing entries after the chequered flag at Symmons Plains.

The Tickford Racing driver jumped from ninth to first with a 50.7244s in the #6 Monster Energy Mustang, beating Anton De Pasquale (#11 Shell V-Power Mustang) by 0.0208s.

Van Gisbergen momentarily held the lead with a 51.1868s on his third timed lap but that was quickly knocked off by a 51.0702s from Mark Winterbottom (#18 Irwin Tools ZB Commodore).

Waters moved the benchmark to a 50.9698s on his second run, before Mostert (#25 Mobil 1 Appliances Online ZB Commodore) lowered it to a 50.8798s, just shy of the former’s Practice 1 pace-setter.

That stood up until the 28th minute, when Le Brocq set the 50.7859s which would be his best of the session.

De Pasquale crept up from third to first with a 50.7452s, then put his cue in the rack next time around as van Gisbergen clocked a 50.7805s.

Waters, however, would not be denied, pipping the DJR driver by a couple of hundredths, and van Gisbergen by 0.0561s.

“Saying that, it is only practice, everyone is on different plans, so we won’t get too carried away.

“Got to make the car a bit nicer yet, but a really good start.”

Waters expressed similar concerns to those he identified after Practice 1, however, namely that his Mustang might not be as competitive over a race distance.

“It’s always hard to overtake and you want to start up the front,” he added.

“Our car is probably eating up the tyres a little more than what everyone else is this year so that’s something we need to try to fix.”

Mostert’s qualifying simulation, with roaded tyres down the left-hand side of Car #25, yielded a 50.8342s, while Winterbottom wound up sixth on a 50.8611s.

Scott Pye (#20 DeWalt ZB Commodore) finished seventh-quickest, from Davison and Jamie Whincup (#88 Red Bull Ampol ZB Commodore), the latter of whom was among those to venture off the circuit during the hit-out.

Qualifying for Race 6, a knockout session with field split in half to start off, is due to get underway at 13:25 local time/AEST.