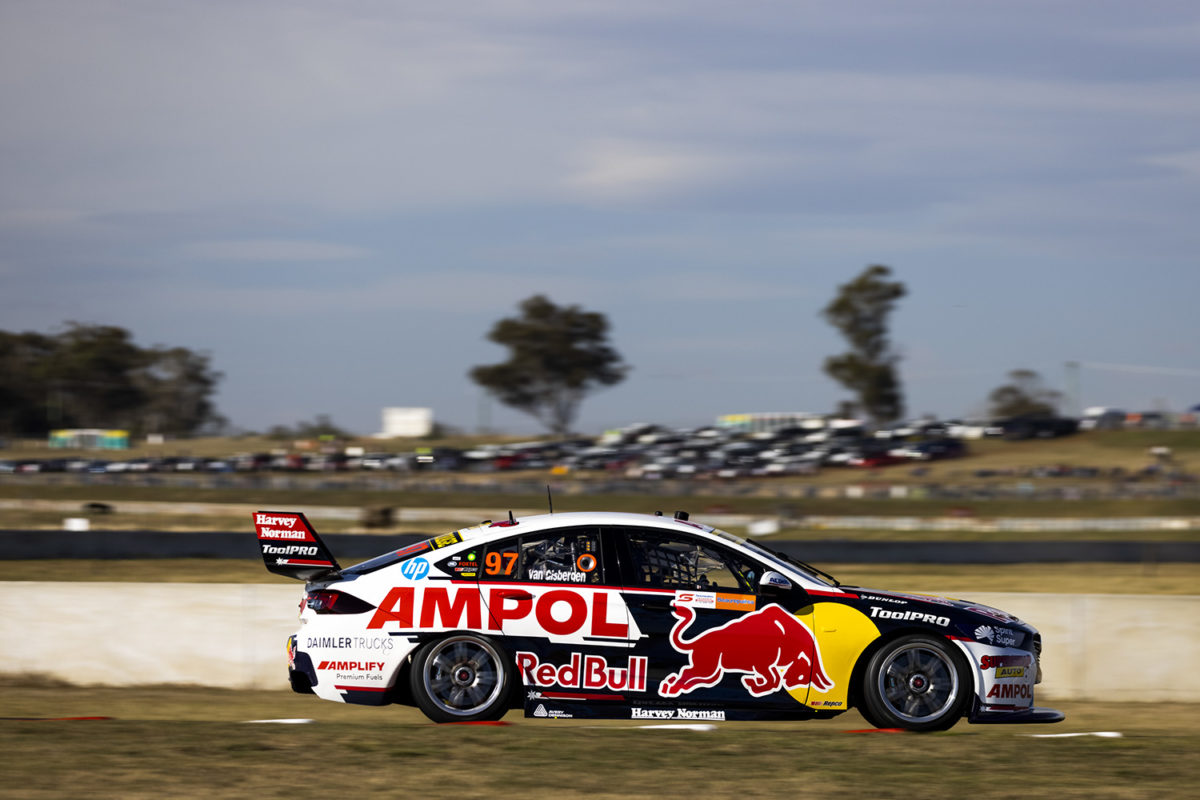 Shane van Gisbergen has broken the Symmons Plains practice record to qualify on pole position for Race 6 of the Repco Supercars Championship at the Beaurepaires Tasmania SuperSprint.

The man at the top of the drivers’ standings was 0.3325s faster than next-best, Tickford Racing’s Cameron Waters, after laying down a 50.4923s in the final minute of the knockout qualifying session.

It was the top four in the championship occupying the top four on the grid, although in a slightly different order, with Walkinshaw Andretti United’s Chaz Mostert taking third and Jamie Whincup making it two Triple Eight Race Engineering entries on the first two rows.

Both Dick Johnson Racing cars got through to the third and final stanza, as did Brad Jones Racing’s Jack Smith, who ended up 10th.

Van Gisbergen (#97 ZB Commodore) was fastest of the six to go out in the first few minutes of Part 3 of qualifying, none of whom reportedly ran on new tyres.

The Red Bull Ampol Racing driver clocked a 50.7016s on his second flyer, while Mostert (#25 Mobil 1 Appliances Online ZB Commodore) took up second spot with a 50.8321s despite dropping a wheel off exiting Turn 7.

Van Gisbergen found another two tenths, knocking off team-mate Whincup’s two-year-old benchmark, when he went for his second run.

Waters wheeled the #6 Monster Energy Mustang to a 50.8248s moments later, with Mostert ending up third despite not being able to improve on his final run.

Whincup moved up three spots with a 50.8359s from the #88 Red Bull Ampol ZB Commodore just before the chequered flag, one ten-thousandth of a second faster than Will Davison (#17 Shell V-Power Mustang) had just gone.

Said the pole-sitter, “Thanks to my mate next door [Whincup] for a tow.

“The car was awesome, the guys have done a great job here.

“We struggled in qualifying in the cold temps at Sandown but the tyres switched on then and, yeah, it was awesome.

“The job is not done yet, no points, but thanks to the team; the car is fantastic.”

Waters was pleased to make the front row, but not entirely at ease given van Gisbergen’s pace.

“We’re happy that we’re on the front row, no doubt,” said the Tickford pilot.

“We’ve been pretty consistent with one-lap speed. The car is not too bad but there’s not much more left in it and obviously Shane is a long way down the road.

“That’s probably why I am a little bit… scratching my head is probably the best way to put it.”

As it turned out, van Gisbergen also topped Part 2 of the session and Part 1A, when the field was split in two.

Jack Le Brocq was a surprise omission from the final segment based on his qualifying pace, putting the #5 Truck Assist Mustang only 16th with a 51.2271s.