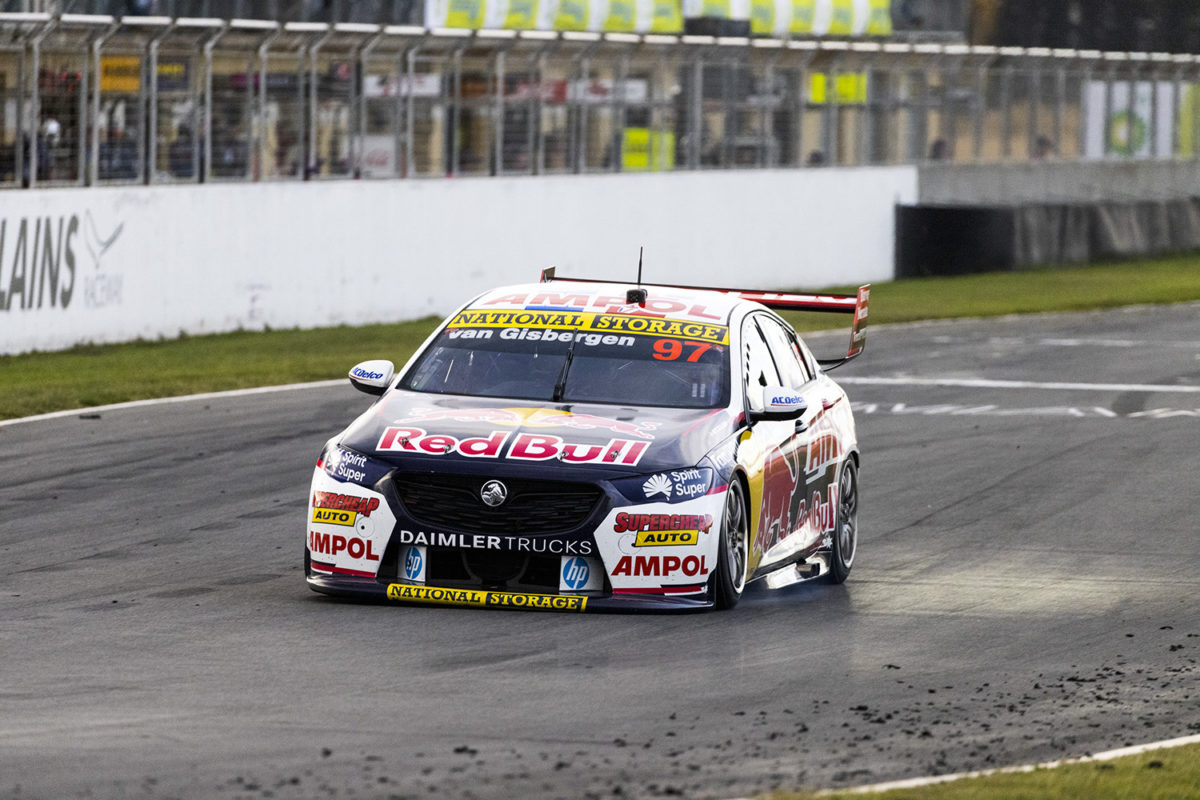 Shane van Gisbergen is not thinking about the prospect of beating Craig Lowndes’ record for consecutive race wins when the Beaurepaires Tasmania SuperSprint continues tomorrow.

Lowndes won eight on the trot in 1996, his first season in the Australian Touring Car Championship, a marker which has not been matched.

It could fall tomorrow, however, with van Gisbergen having equalled team-mate Jamie Whincup’s run of seven in a row in 2008, once one accounts for his victory in last year’s Bathurst 1000, by winning the opening race at Symmons Plains.

The Red Bull Ampol Racing driver does not have Lowndes’ milestone in his mind, however.

Asked how far he could extend the streak, van Gisbergen responded, “I don’t know. I don’t think about that stuff.

“I just try and drive as fast as I can and at the moment [I am] not thinking about records or any of that stuff; just in the moment.

“Our car is good, the team is awesome, the atmosphere in the team, preparation, when we travel, the team dinners…

“We’re in a good place at the moment and [have] just got to keep the run going.

“Even if I don’t win, hopefully Jamie [Whincup] is up the front winning.

“It’s really cool to be a part of this team at the moment.”

The seven-time champion makes his team-mate’s results to be even more remarkable given the relative stability in regulations since Car of the Future was introduced in 2013.

“SVG to win the first six, that’s pretty impressive considering just how close the cars are now,” he reasoned.

“It’s never been as even as it has been; we’ve run this car since ’13 and it just keeps getting closer and closer and more competitive.

“To win the first six in the last year of this car [before Gen3 is due to be introduced] is pretty impressive.”

Although van Gisbergen seemingly cruised home in the first 44-lap contest at Symmons Plains, he had dropped as low as third, on the opening lap of the race.

The Auckland native had put Car #97 on pole position but admitted to poorly positioning himself in his grid box, before being the victim of Cameron Waters’ racecraft when Whincup rounded him up for second spot at the first braking zone.

“It’s not an excuse but I was looking around, I’d parked in the wrong spot, I didn’t park back far enough to see the lights but I muffed it [start itself] anyway,” admitted van Gisbergen.

“Cam was smart trying to put me into third, he just brake checked me at [Turn] 1 to let Jamie go around the outside; pretty good move.

“Once we got going, my car was awesome; braking was the biggest strength and that’s what it has been all day.

“[There are a] Few things we can work on for tomorrow but that was really good today.

“There’s some balance stuff I didn’t quite like but I’m just happy,” he added on Sunday set-up considerations.

“Qualifying, we really struggled at Sandown in the cold conditions; today, it was much better switching the tyre on.

“We tried a few things and it worked really well so hopefully we can replicate that tomorrow.

“Qualifying car, I had no comments about it, it was just perfect, so need that again tomorrow.”

It was back in qualifying when Whincup and van Gisbergen were towing each other up Symmons Plains’ relatively long back ‘straight’, and the latter also hailed the Triple Eight one-two.

“We were towing each other in qualifying and trying to help each other as much as we could,” he recounted.

“We tried a whole bunch of things in practice today between the cars and [were] working together super close.

“We’ve obviously got some momentum on our side of the garage and seeing #88 [Whincup] up there now as well is a really cool thing.

“One-two for the team, everyone is pretty stoked.”

Van Gisbergen continues to drive with the burden of a broken collarbone and broken ribs after a mountain bike incident in early-March.

He got through the last Supercars event at Sandown with the injuries, as well as the Bathurst 6 Hour earlier this month, and affirmed he is now managing without painkillers.

“I’m pretty sore and haven’t taken any painkillers this week so I can feel it but I’m fine.”

Qualifying for Race 7 takes place tomorrow at 10:45 local time/AEST, followed immediately by the session which sets the starting grid for the day’s other race.