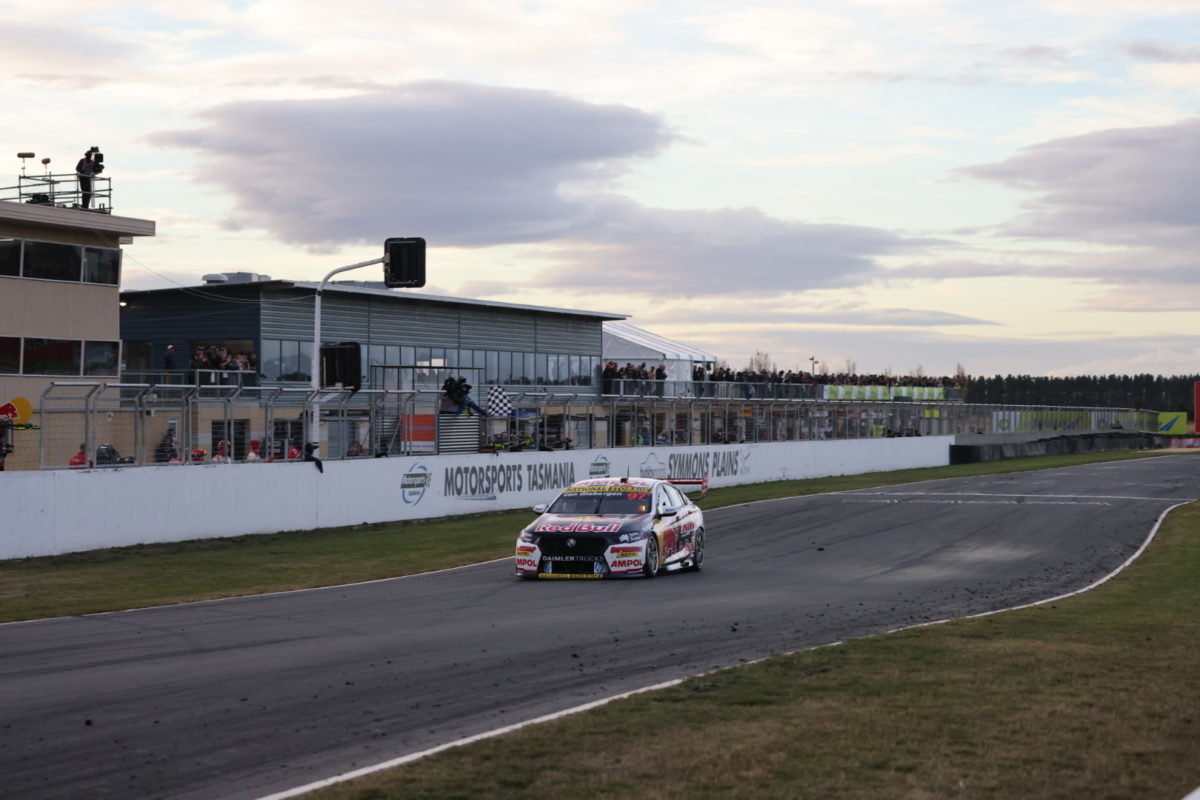 Shane van Gisbergen has taken a sixth win from as many races so far in the 2021 Repco Supercars Championship, at Symmons Plains.

Despite dropping from pole to third on the opening lap, the Red Bull Ampol Racing driver quickly reclaimed the ascendancy and ultimately led Jamie Whincup to a one-two in the Beaurepaires Tasmania SuperSprint opener.

The team-mates were separated by 4.7420s when the chequered flag flew after 44 laps, with the Shell V-Power Racing Team’s Anton De Pasquale almost another five seconds further back in third spot.

Under grey skies, Waters got the jump from the outside of the front row and the Monster Energy Mustang led the field into Turn 2, where Whincup (#88 ZB Commodore) went around the outside to take second place from van Gisbergen (#97 ZB Commodore).

Whincup held the spot only as far as the end of the back straight, when van Gisbergen went down the inside, and the championship leader needed little time to wipe out the few tenths of margin that Waters had managed to establish.

Van Gisbergen stalked the #6 Mustang until he went down the inside on Lap 9 at Turn 6, and stretched his lead beyond a second in just two laps.

It was Lap 13 when Whincup put virtually the same move as his team-mate had done on Waters, and Mostert followed him down the inside despite the smoke signals that he sent under brakes.

DJR team-mates Davison (#17 Mustang) and De Pasquale (#11 Mustang) had run fifth and sixth until pitting on Laps 11 and 14 respectively, a slow stop for the former resulting in them swapping positions relative to each other.

Whincup was around 3.6s behind van Gisbergen when he took service on Lap 17 for rears, Waters was into the lane on Lap 21 for working side tyres, and Mostert peeled off a lap later for the same change.

When they came out, it was Whincup heading De Pasquale, Davison, Mostert, and Waters, while van Gisbergen pressed on in the lead until Lap 24.

He took another set of rears and resumed almost two seconds up the road from Whincup once he came up to speed, before Mostert passed Davison for an effective fourth on Lap 27 at Turn 6.

When Andre Heimgartner (#7 Ned Mustang) pitted on Lap 36, the cycle was done, by which time van Gisbergen had grown his advantage over Whincup to 2.99s.

Over four seconds separated the two Triple Eight Race Engineering entries on Lap 41, and the margin crept up until van Gisbergen formally wrapped up a sixth straight win in 2021, and seventh dating back to the 2020 Bathurst 1000.

“It was a bad one [start] and then Jamie pulled a nice move and got me,” said the New Zealander, whose championship lead is now 153 points over Whincup.

“Did some big bombs at the end of the straight and got them back; it was fun racing at the start.

“Then just tried to build a gap so we could manage it but burnt up our rears, which puts us in a bit of a spot for tomorrow.

“Our car is awesome, it’s really cool to be a part of it.”

Whincup took the fastest lap bonus points as he finished well clear of De Pasquale, who did not appear to come under serious threat from Mostert in the latter stint.

A stall entering his pit box and starter motor drama were costly for David Reynolds, who ended up 16th in the #26 Penrite Mustang having run inside the top 10.

All 24 cars finished, although Nick Percat was eight laps down in the end after an early incident, unseen on television, ultimately saw the #8 R&J Batteries ZB Commodore smack the fence at the Turn 4 Hairpin.