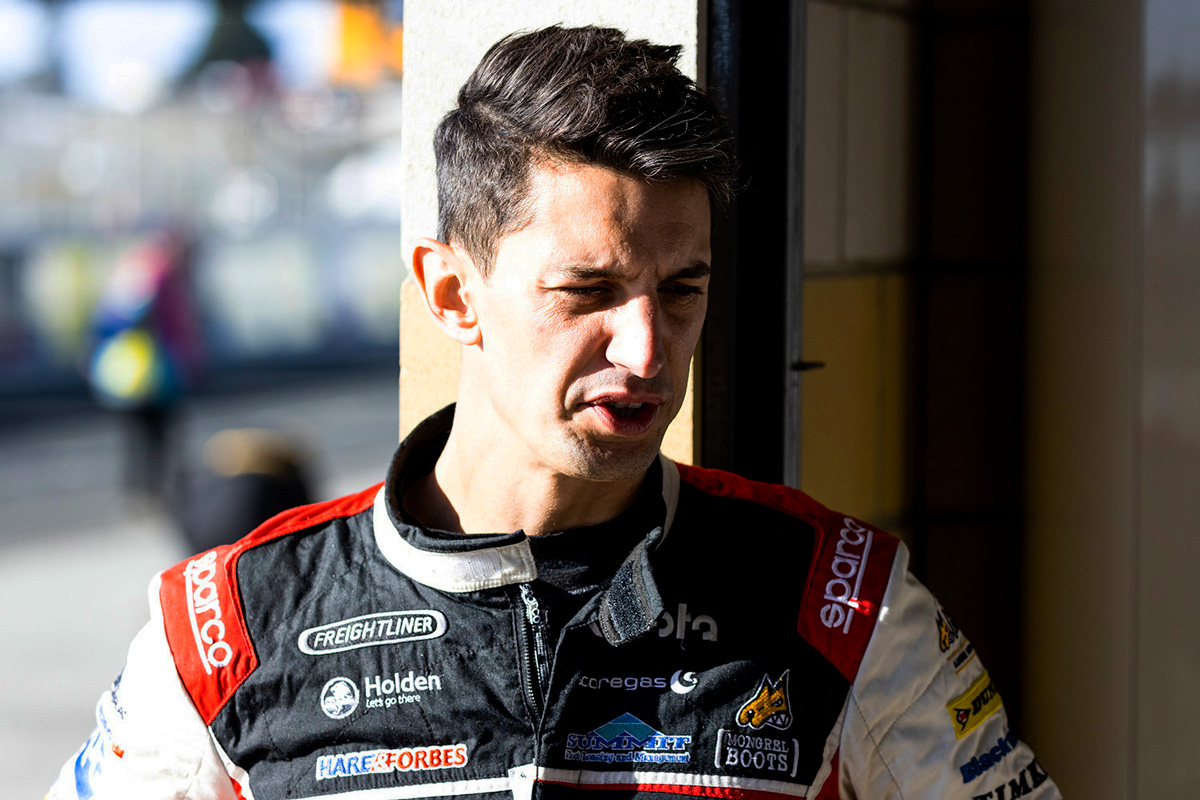 It was a tough day for Nick Percat

Nick Percat was left with a broken steering arm following an opening lap skirmish in which he got t-boned in Race 6 at the Beaurepaires Tasmania SuperSprint.

Percat’s charge to make up positions lasted until the hairpin where he was caught up in a Lap 1 incident with Zane Goddard, which was not shown clearly on TV.

The Brad Jones Racing driver was sandwiched between Goddard’s car and the outside wall and picked up steering damage from the clash, forcing him to the pits for lengthy repairs. He ultimately finished 24th and last, eight laps down.

While shrugging off the incident as a part of what happens when the red mist descends at the start, Percat suggested he got what he deserved after a poor run in qualifying saw him start from 19th.

“Just minding my own business and I think it was Goddard; we were side by side at the hairpin and not sure if he’s just understeered up into me and ended up semi-t-boning me and drilling me into the outside fence,” Percat recalled.

“I wouldn’t imagine it was intentional, it was just racing but it’s just one of those days when you qualify back there, you probably deserve it for doing an ordinary job in qualifying.

BJR team-mate Todd Hazelwood also had a woeful qualifying and was in the same region as Percat at the hairpin when the contact was made.

“He looked like he got awkwardly t-boned; it’s one of those things at the hairpin, everyone is trying to race pretty hard in those first opening laps,” said Hazelwood.

“I certainly was, I was making lots of moves.

“It’s unfortunate as a team, we don’t want to be losing teams’ championship points this early but two races tomorrow, we’ve got fast cars so we’ll hit the reset button tonight and go again tomorrow.”

The incident was officially investigated post-race, with it determined no further action was warranted.

“Having consulted the DSA, the DRD determined that no Driver was wholly or predominantly to blame for the Incident and therefore the matter did not warrant referral to the Stewards.”

Hazelwood notched up his 100th race in Supercars and had a much better run to take 14th at the chequered flag having started at the back of the field.

The 25-year old proved the BJR Commodores’ pace in race trim, moving up 10 positions in a quickfire 44-lap encounter.

“We had a fast car in practice inside the top 10 all day and rolled out in qualifying and car was like it was on ice,” he added.

“We look like fools after it all as a group; plenty of motivation to move forward and when you’re on your back there’s only one way you can go and that’s forward.

“We gave it everything we’ve got and had to do it the hard way but I think we’ve got a fast package for tomorrow and looking forward to what we can do.”