Marquez exceeds own expectations on first day back

Marquez exceeds own expectations on first day back 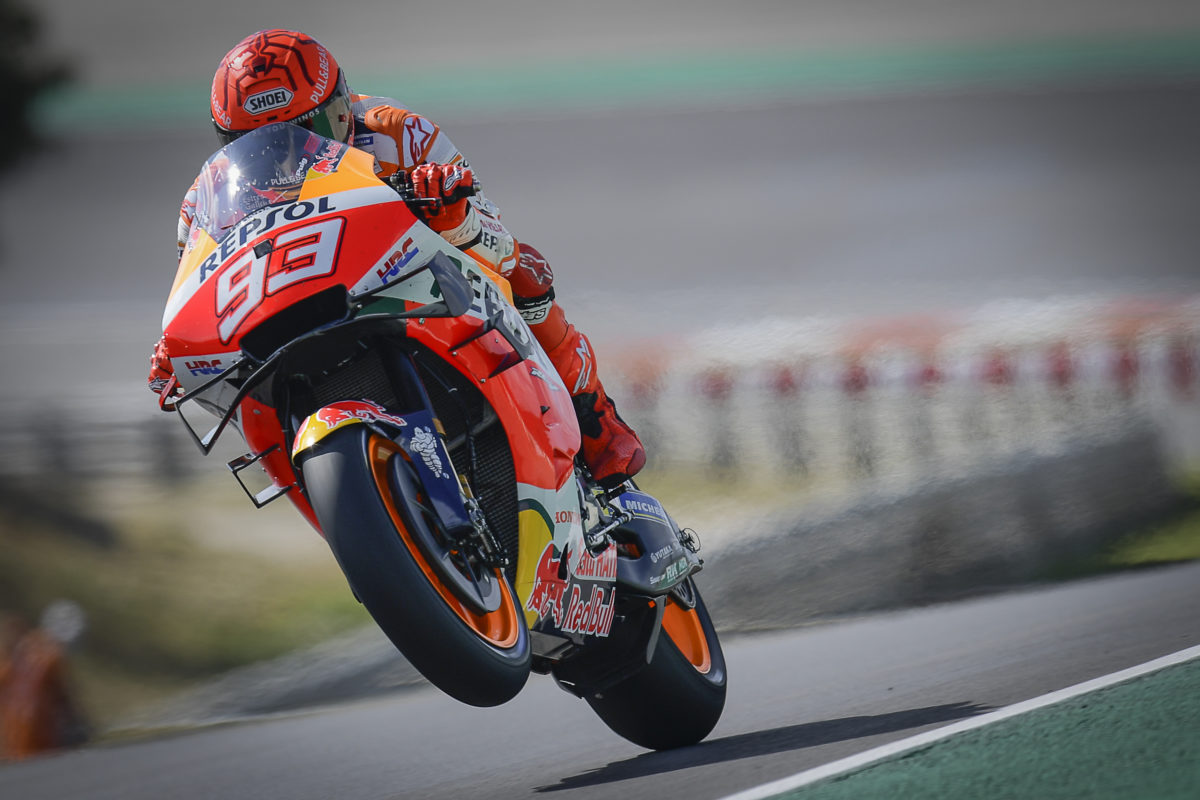 Marc Marquez exceeded his own expectations in going sixth-fastest on his first day back on a MotoGP bike after over eight months out due to a broken arm.

The Repsol Honda rider is currently on for direct passage to Qualifying 2 at the Portuguese Grand Prix after setting a 1:40.339s in Friday practice, 0.473s off Francesco Bagnaia’s benchmark.

Marquez admitted on the eve of Round 3 of the season that he was unusually nervous, and his mood was unchanged given the damp patches which greeted him at the start of Free Practice 1.

He was third-quickest on that occasion and maintained a solid top 10 position when the field ran on a dry track in FP2, after which he explaining that braking is still a significant struggle.

“I was very nervous before FP1,” recalled Marquez.

“The track had some wet parts so it was really difficult to ride, then of course you always have some question marks.

“But honestly speaking, the most difficult thing was the braking point. Even in FP2, every time I braked, I said ‘I will not turn, I will not turn’ and then the bike stops.

“The mind, the eyes, but especially the feeling of the speed on the entry of the corner is a lot. I don’t feel exactly where I need to brake. But step-by-step with more laps I’m beginning to understand.”

The six-time premier class champion is still wary of the potential for fatigue in his right arm like that which he has already experienced in Portugal.

However, he is also pleased with the pace he is producing.

“In the morning, I felt better than in the afternoon, because I was fresh, the arm was fresh and I had power,” explained Marquez.

“Apart from that, we are in a much better situation than what we expected before the weekend.

“I don’t know how, because I don’t understand what’s going on. I’m just riding the bike, trying to follow my way.

“The lap times are coming; it’s not the most important thing, but they are coming in a good way.

“But it’s true the main question mark for me – the speed is there – so it’s about how the arm will react during the weekend when I get up tomorrow.”

Honda test rider Stefan Bradl filled in for Marquez for the latter 12 rounds of 2020, including the finale at Portimao, and also the first two of 2021.

Marquez said that there will be some tinkering with the set-up on qualifying day, although he is focused more on his own riding rather than the bike.

“I’m riding with Stefan’s set-up from last year,” he stated.

“[On Saturday] we will do a few changes but I don’t want to lose the way. I know what I have and now it’s time to just ride.

“This morning I felt good, then this afternoon the feeling was not so good on the bike.

“The last lap was a little bit crazy, I didn’t like the last lap but I had a nice save,” he said of a big twitch into Turn 8 on his final flyer of the day.

“But it’s my riding style. It’s true that with the new tyre I’m struggling more than with a used tyre. With the used tyre the bike becomes softer, the lap times are slower and then I feel much more comfortable.

“But with new tyres everything is more stiff and specifically at that corner, I think from [Turns] 6 to 7, on that change of direction, my head says ‘Now it’s time to go in for Turn 7’, but the body didn’t follow what I want!

“Then I just created a slide to finish the turn because it was the last lap and I didn’t give up the lap. Things that of course with more laps on the track I will improve.

“But when I went into the box and I saw that I was P6 it was a great surprise because on the last lap I did many mistakes and I expected to be out Qualifying 2, for example, because the feeling was not good and I felt slow. But then I was inside.

“So the speed is there. This makes me happy, more comfortable, more quiet.

“Now everything will depend on my physical condition.

“Today was the first day. Everything was fresh. Tomorrow I know, because I can already feel, that I will be more tired and the muscles will struggle a little bit more.

Practice continues tonight before qualifying gets underway at 23:10 AEST.