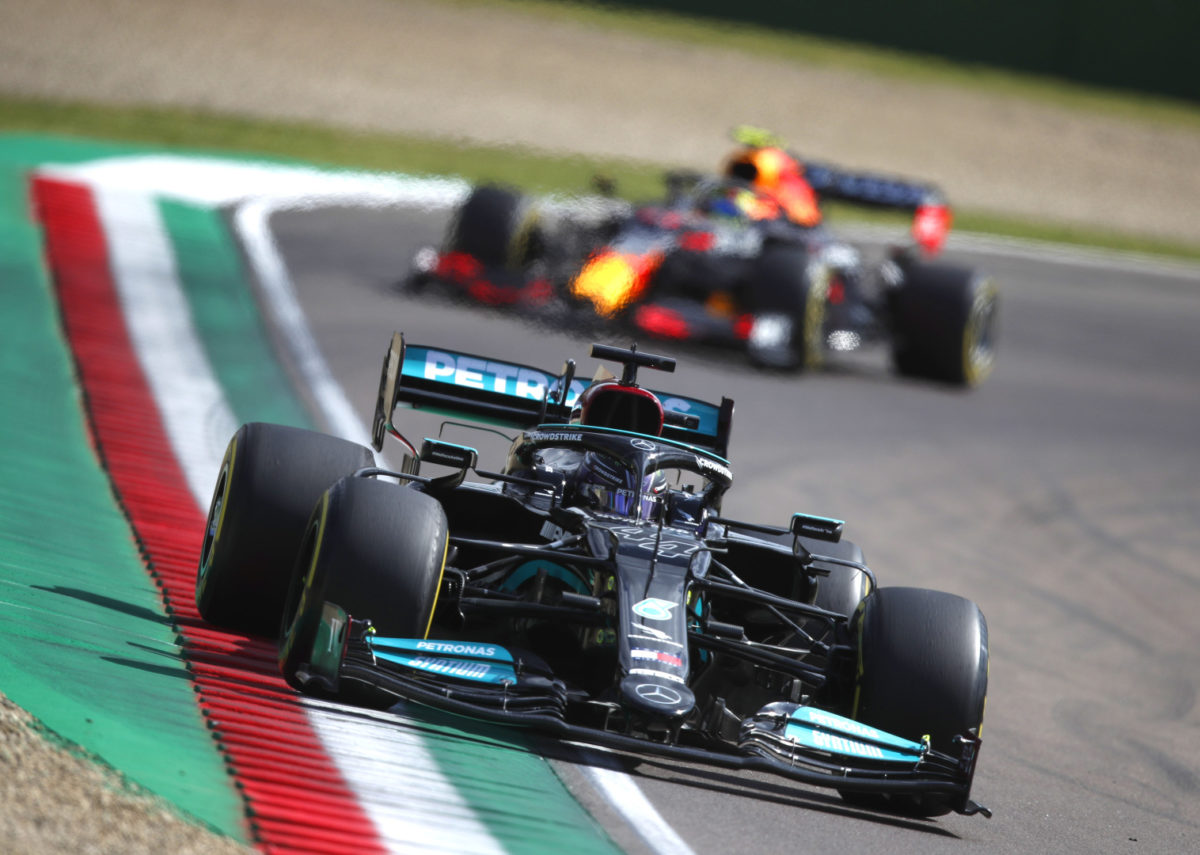 Lewis Hamilton has claimed the 99th pole position of his Formula 1 career in qualifying for the Emilia Romagna Grand Prix.

The Mercedes driver saw off a challenge from Sergio Perez and Max Verstappen, while surprise package Lando Norris came close to creating an almighty upset.

It wasn’t until the 14-minutes remaining point that the bulk of the field headed out.

Mick Schumacher had already been on track, as had his Haas team-mate Nikita Mazepin, the German recording a 1:16.806s.

A mistake from Yuki Tsunoda left the Japanese driver in the wall after losing control of the AlphaTauri at Variante Alta.

The Japanese driver was an immediate elimination, the crash drawing the red flag with six minutes run in the session.

Once the stricken car was cleaned up, qualifying restarted with a flurry of activity as the bulk of the field had not set a time prior to the red flag.

Hamilton had sat third after his first attempted, but rose to second next time through, 0.283s away from his team-mate.

A deleted lap time for Perez made for a nervous moment, but the Mexican was able to record a time good enough for fifth and comfortably clear of the drop zone.

Eliminated at the end of Q1 were Kimi Raikkonen, Antonio Giovinazzi, Mick Schumacher, Nikita Mazepin, along with Tsunoda.

At Williams, both George Russell and Nicholas Latifi progressed, only the second time in his career that the latter had made it through to Qualifying 2.

Verstappen was the early pace-setter when the second phase began, a 1:14.884s which was quickly bettered by Hamilton’s 1:14.817s.

Vettel improved to seventh fastest with three minutes of Q2 remaining, Aston Martin running both the he and Lance Stroll out of sequence with the bulk of the field.

Both set times inside the top 10 as the rest of the field were building up towards their final flying laps.

That saw Perez jump to the top of the timesheets by 0.002s with a 1:14.716s, though used another set of soft compound tyres to achieve the lap.

Norris remained second while Leclerc climbed to third as the chequered flag fell.

Ricciardo improved to eighth and ensure his progression through to Q3 while missing the cut were Carlos Sainz, Russell, Vettel, Latifi, and Fernando Alonso.

The final phase of the session began with Norris banking a 1:14.875s.

Perez then went fastest only for Hamilton to best him still, the pace lowered to 1:14.411s.

Crossing the line soon after, Verstappen was just 0.091s off the pace of the lead Mercedes to slot into a provisional front row berth.

A lull during the middle phase of the session followed before a crescendo built inside the final three minutes as the field headed back out on track.

Bottas was the first driver to begin his final flying lap, with Verstappen last in the queue.

The Mercedes driver was only sixth fastest, but improved on his previous effort at the first split, only to run wide at Piratella to ruin any hope he had of improving.

Behind him, Norris went fastest of anyone to the first split, carrying that pace to the second sector and came within 0.043s of provisional pole.

However, McLaren’s euphoria was short-lived as his time was deleted for track limits and he fell back to seventh, one spot behind Ricciardo.

Perez qualified second over Verstappen in third, the top three split by less that 0.1s, with Leclerc rounding out the second row 0.329s away from pole position.

Pierre Gasly was fifth from the two McLarens, Bottas eighth, with Esteban Ocon and Lance Stroll rounding out the top 10.

The Emilia Romagna Grand Prix gets underway at 23:00 AEST on Sunday evening.