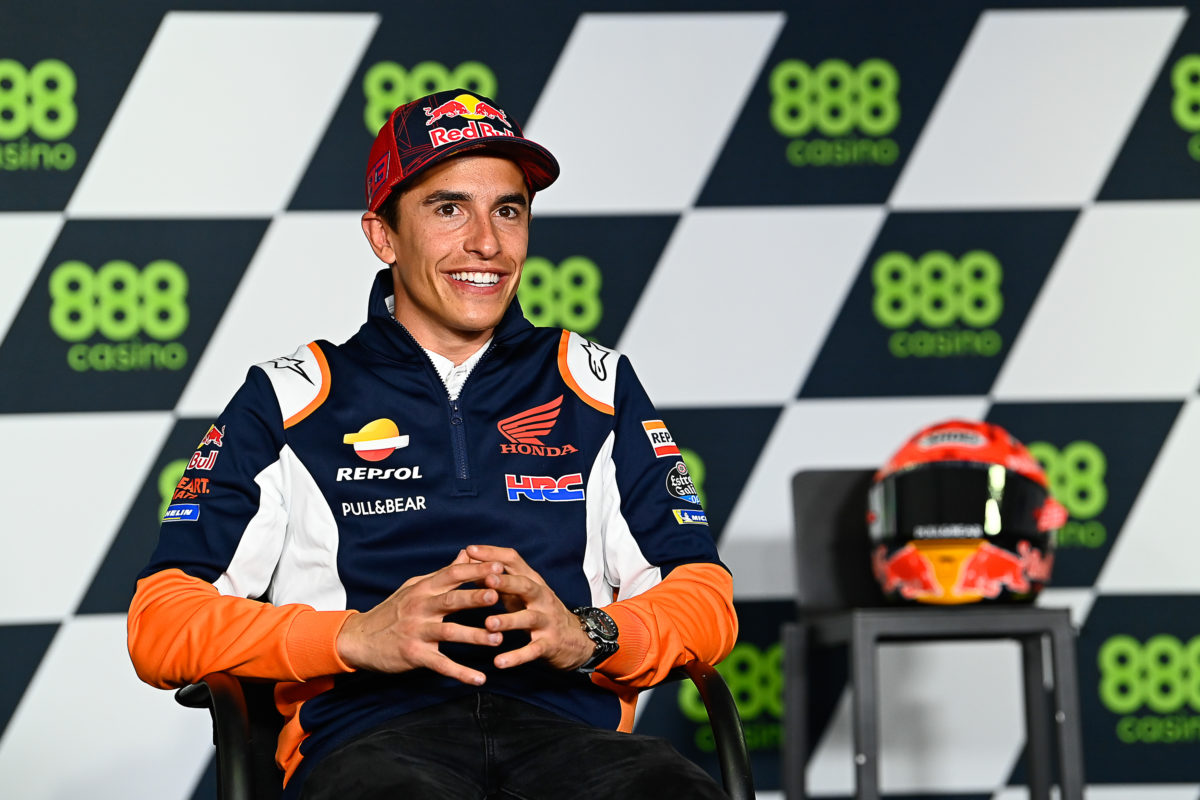 Marc Marquez admits that he is unusually nervous ahead of his comeback from a broken right arm in this weekend’s Portuguese MotoGP.

The six-time premier class world champion has not ridden competitively since Round 2 of 2020, over eight months ago, after his sickening crash in the first race of the season.

Marquez concedes that he will not be in optimum condition either physically or mentally, and reiterated that there are no targets for results straight away.

“It’s really nice to be back here with all of you, it was a hard nine months, really difficult,” said the Repsol Honda rider.

“[Today] it will be time to make the most important step in my rehabilitation, riding a MotoGP bike.

“And it’s true I’m nervous, I have some butterflies in my stomach that aren’t normal for me.

“But I know after FP1 they’ll be gone, and it’s now time to enjoy it on the bike again.

“[On Thursday] I met all the team, the Japanese staff as I saw the Spanish staff in a test, and they’re so motivated.

“And immediately I said, don’t forget we don’t have a target this weekend. I will be not the same Marc right from FP1, I need time.

“Still my rehabilitation is two things; physical and mental. We’re in the process but I’m really happy to be here and looking forward to riding the bike.”

Having not ridden a MotoGP bike since he called off his attempt to contest the 2020 Andalucian Grand Prix in qualifying, Marquez missed the 2021 pre-season and the two races which followed in Qatar.

The threat of rain at Portimao tonight (AEST) will not dissuade him from riding in Friday practice, although he also admitted that his confidence about saddling up on a MotoGP bike is “not high”.

“I wouldn’t like to ride a MotoGP bike for the first time in a long time in the rain,” said the 28-year-old.

“But if I’m here it’s because I’m ready to ride in all situations and if it rains I’ll ride.

“For these guys [MotoGP rivals] their confidence is high; my confidence is not high at the moment! I’m in a different situation, I’ll start step by step.

“It doesn’t matter the circuit or the time, now is my pre-season and I’m looking forward to riding my Honda.”

Marquez says he adjusted to life watching racing on television, but feared that he might not even have a normal right arm, let alone ride a MotoGP bike, again.

“It was really strange, especially in the beginning, then in the mid period it was normal already, I was just a fan watching on TV and enjoying it,” he recalled of watching on as the championship continued.

“It was hard to decide to not race in Qatar 1 and 2 [opening rounds of 2021], I felt ready but not 100 percent and the doctors stopped me. I followed that advice.

“But it was hard, nine hard months, with not only the doubt if I’ll ride again but also whether I’ll have a normal arm.

“I was optimistic, and the people around me helped a lot to keep the motivation there. And we have the target, to ride a MotoGP bike again.”

In other MotoGP news, Suzuki’s Joan Mir will be without regular crew chief Frankie Carchedi this weekend due to a positive COVID-19 test.

Carchedi has not travelled to Portugal and will be replaced by Tom O’Kane, who is normally crew chief for test rider Sylvain Guintoli.