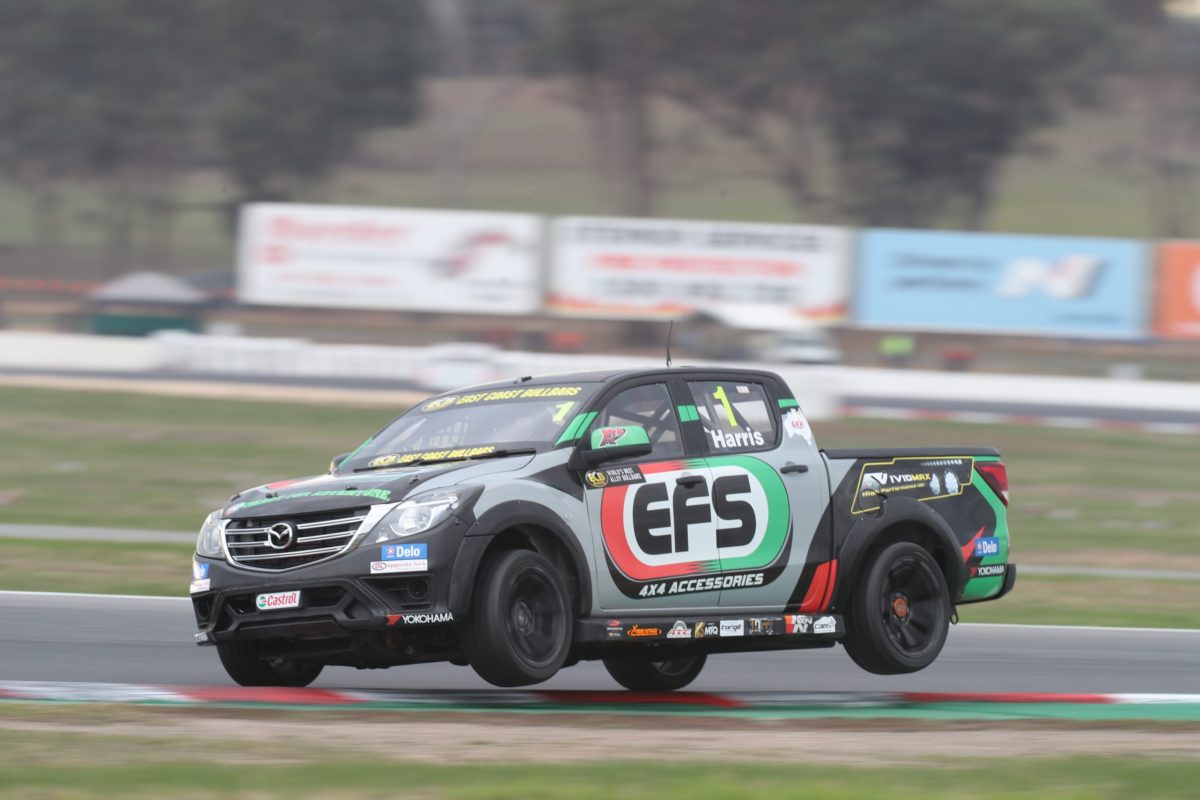 Peters Motorsport and its title-winning driver Ryal Harris will be on the grid when SuperUtes returns as a V8 category next month.

Team manager Brett Peters has confirmed that Harris will be back in the same Mazda BT-50 in which he won the 2018 series, carrying backing again from EFS 4×4 Accessories.

This time around, however, the dual cab will have the LS3 engine which entries are running under the bonnet, rather than a turbo diesel.

Harris, also a three-time series winner in the V8 Utes of old, now races for Peters in Touring Car Masters but has been won over by what he has seen of the SuperUtes’ latest developments.

“We’ll now be running a third V8-powered race car this year,” Peters told Speedcafe.com, in reference also to the TCM Camaro and Torana.

“EFS is back, [general manager Clayton Mortensen has] been watching with interest, everything that Luke’s [Sieders, V8 SuperUtes project leader] been doing.

“We thought he was going to sit on the fence but he’s in, so we’re flicking the switch.

The BT-50 in question, which belongs to Peters Motorsport team owner Rod Dawson, already had a V8 installed in late-2019.

While that was for the purpose of determining fit, and the intent of offering evaluations for prospective drivers in the series, it also means that installing the category LS3 is now a relatively straightforward exercise.

“We already had an old LS in it so a lot of the hard work’s done,” explained Peters.

“It’s pretty late to be making the decision but a lot of the hard work’s done because we’ve already done all that sort of stuff; engine mounts, and the list goes on and on and on.

“I think [the LS3] should arrive today or tomorrow. Fortunately, they had engines ready to go.

“That’s the other thing; honestly, Luke’s done a magnificent job on the whole thing and it’s all going to come together just nicely, so it’s looking very, very positive.

“With the Haltech tune, they’ve got heaps of mumbo, so they’ll be super fun to drive.

“For EFS, obviously the same television package that utes always had was a strong positive for him making his decision, and the fact that they’re going to be fast and exciting, so let’s bring it on.”

Harris shook down what was by then already a V8-powered BT-50 in January 2020.

Speedcafe.com understands that V8 SuperUtes is still tracking well for a 16-strong grid when the season opens at The Bend next month.

That would be the largest field in the broader SuperUtes era, which hit a high of 14 entries during 2019, the second and final season of diesel power.

Round 1 takes place at the OTR SuperSprint on May 7-9.