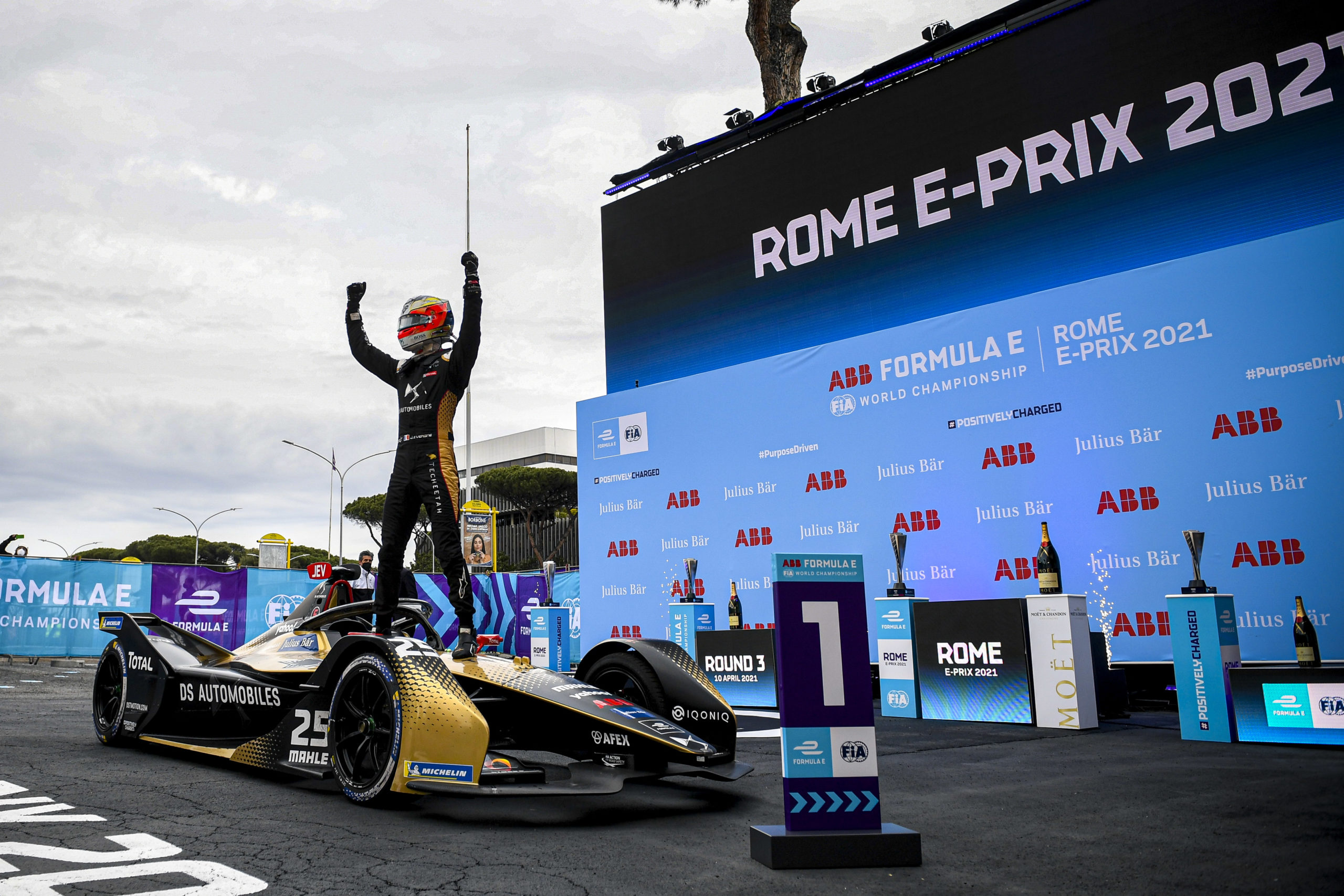 DS Techeetah driver Jean-Eric Vergne came out victorious in a chaotic finish in the first leg of the Rome E-Prix double-header.

Having led the lion’s share of proceedings, a dive by Audi pilot Lucas Di Grassi netted the Brazilian a late-race lead.

However, his race would come undone in the dying minutes as his car struck technical troubles.

As he slowed, Mercedes driver and top qualifier Stoffel Vandoorne went to Di Grassi’s outside and hit a bump, sending his car into a spin and careening into the concrete wall.

His team-mate Nyck De Vries, another early contender in the race, slapped the wall in avoidance. Both drivers ultimately ended with DNFs to their name.

A damp start to proceedings saw the race get underway under control of the Safety Car.

At the front, Stoffel Vandoorne led the field to the green flag with Porsche pilot Andre Lotterer in tow.

Drama struck less than a lap into the race as Lotterer dive-bombed Vandoorne under braking.

The ensuing contact saw Vandoorne shoot down the escape road while Lotterer tried valiantly not to wedge his car in the Tecpro barrier.

With his wing snagged in the wall, Lotterer was left spinning his tyres as the field blew by. He eventually managed to pluck reverse and narrowly avoided being hit by Jaguar driver Sam Bird.

That handed Nissan’s Oliver Rowland the lead while Lotterer plunged to seventh and Vandoorne to 13th.

Rowland’s lead was short-lived, however. He was given a drive-through penalty for using too much power. He relinquished the lead with 32 minutes remaining, leaving Di Grassi in front and defending from Vergne.

The Frenchman used his Attack Mode on Lap 10, falling briefly outside of the top five. Frijns, De Vries, Wehrlein and Lotterer followed suit a lap later.

Vergne’s early use of Attack Mode effectively gave him an undercut on Di Grassi, who used his Attack Mode with 20 minutes remaining. 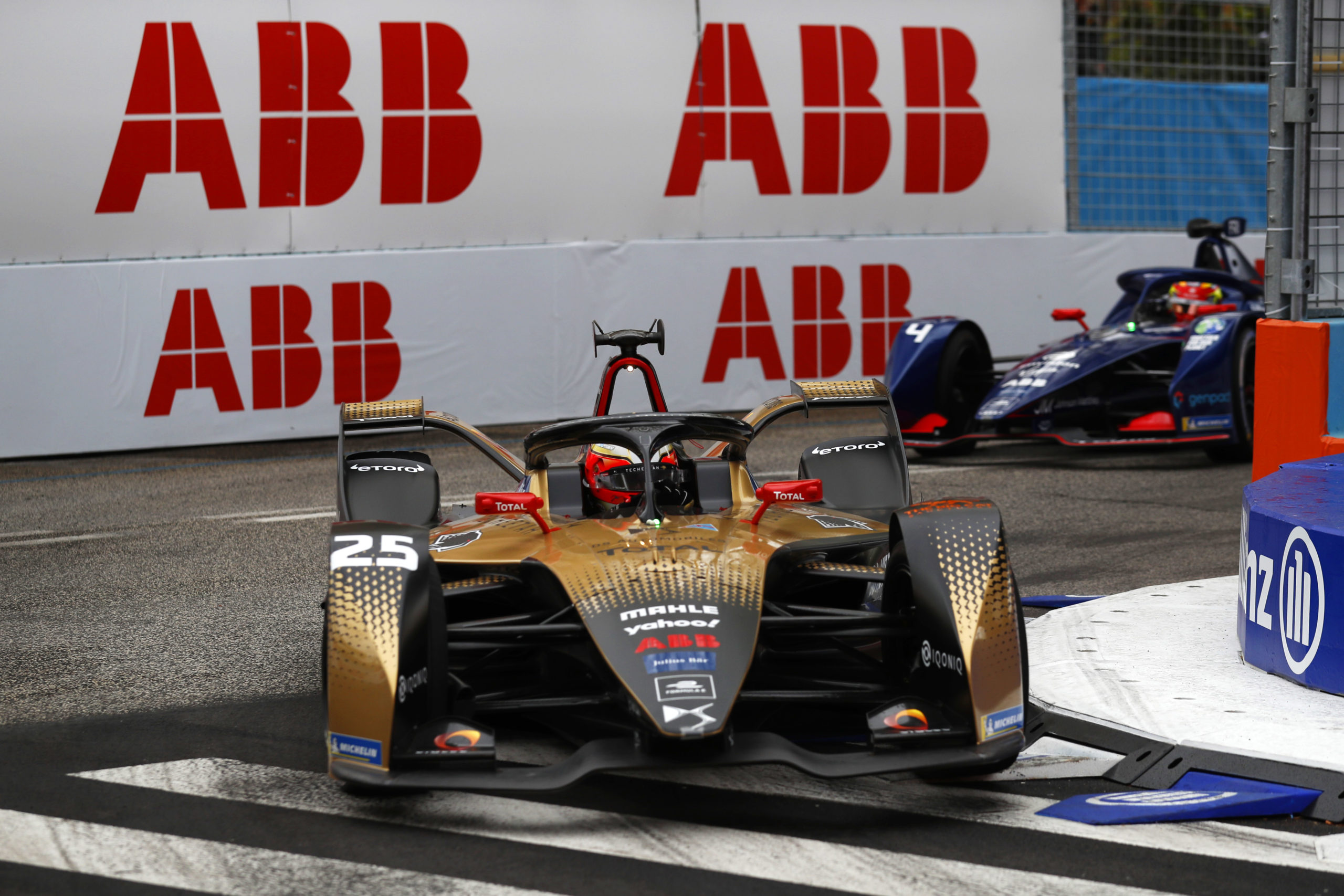 As Di Grassi dropped back to third, Frijns pressured Vergne for the lead. However, in doing so, they dropped into the clutches of Di Grassi who lunged Frijns and got back into second place.

With 16 minutes to go, Vergne led the way with Di Grassi in arrears, De Vries third, Frijns fourth, and Bird fifth. Just behind them, Wehrlein was engaged in a battle with Evans.

Vergne soon found his way back to the lead with 13 minutes to go, leaving De Vries and Di Grassi to squabble over second spot.

As Di Grassi passed De Vries and neared the end of his final use of Attack Mode, the Brazilian closed in on his French rival. A four-way fight soon emerged for the win with 10 minutes to go.

Bird cracked the podium with a dive on De Vries while the other Jaguar of Evans overtook Vandoorne for fifth with eight minutes remaining. Shortly thereafter, Evans blazed by De Vries.

Having pressured Vergne for the lead, Di Grassi lunged late under brakes and took top spot. However, his time in front would be short-lived.

With five minutes to go, drama struck as the leading Audi slowed through the sweeping right hander.

As Vergne, Bird, and Evans blew past, Vandoorne went wide and was unsettled as he went over a bump. That sent the car into a spin, colliding heavily with the inside wall.

In trying to avoid his spinning team-mate, De Vries slapped the outside wall and had to park his car with too much damage.

The race was duly brought under control by the Safety Car, the cars taking the chequered flag at a snail’s pace.

Ultimately, it was Vergne who claimed top honours with Bird and Evans in tow.

The second leg in the Rome E-Prix double-header takes place tonight at 21:00 AEST.