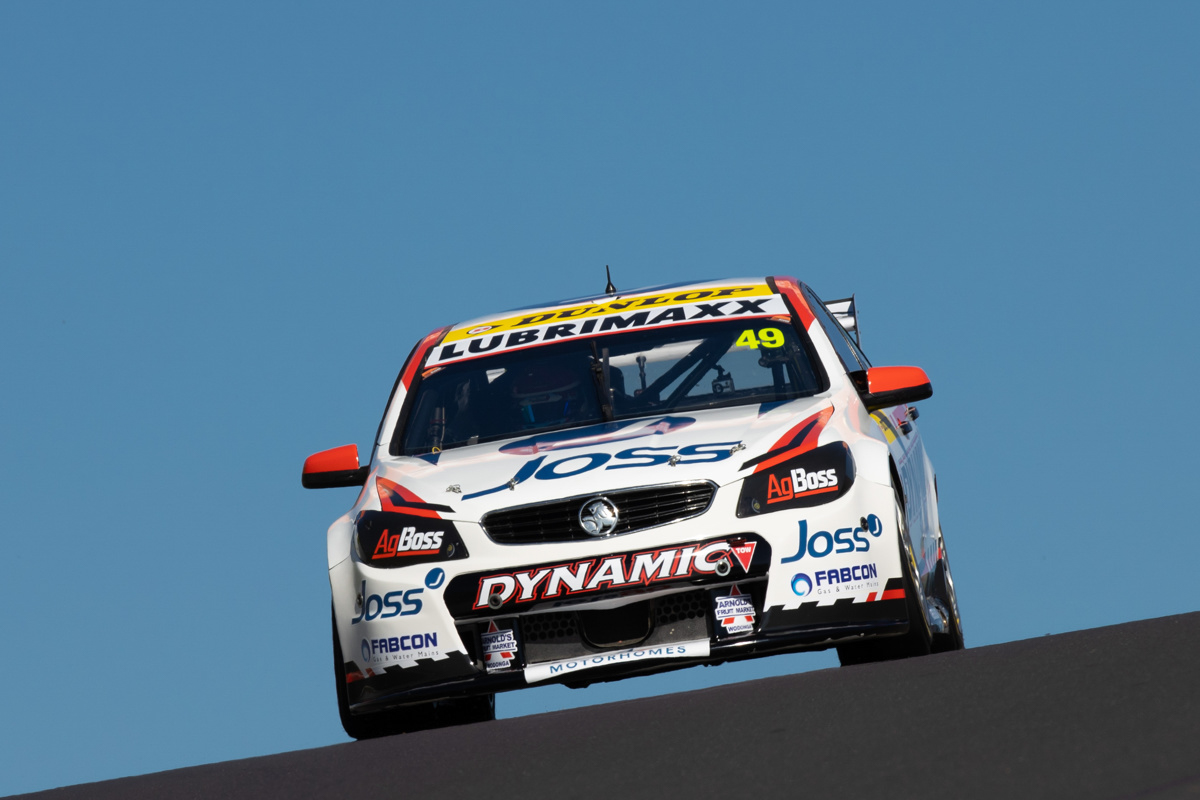 The following is the full stewards report, as released to media, concerning the disqualification of Car #49 from Race 2 at Mount Panorama due to use of a non-compliant engine.

Information purposes only – no regulatory value

On 7 April 2021 a Panel of Stewards conducted a Hearing into a Charge by the Race Director that Image Racing breached Rule G8.1.2 in that the engine used in Car #49 did not conform to an ESD.

The Stewards upheld the Charge, found the breach established and imposed a Penalty of Disqualification of Car #49 from Race 2 and have directed that the Final Classifications for Race 2 be amended accordingly.

A copy of the Stewards Decision is attached.

The Stewards, having received a Stewards Referral & Charge Sheet from the Race Director, having conducted a Hearing on 7 April 2021 and heard from the Authorised Representative of Image Racing, having received documentary evidence including the Competitor’s Declaration of Conformity for Car #49, ESD SC-2-305, dyno graphs and various emails and heard evidence from the HoM, the Supercars Engine Projects Manager, a representative of Walkinshaw Andretti United and a representative of Erebus Racing, considered the matter and determined the following

Following Race 2 the engine from Car #49 was removed from the Car, sealed and taken by Supercars Technical personnel for post-Event checks. It was subsequently found not to comply with any ESD Supercars have a record of issuing for a VF Commodore and the Team was unable to produce an ESD to which the engine conforms.

G8.1.2 Cars must only be fitted with an engine as detailed in an ESD relevant to that make of Car

Breach established. Car #49 is Disqualified from Race 2 and the Final Classifications for Race 2 are to be amended accordingly.

As part of routine random Post-Event Technical checks, after the conclusion of DS2/DS3 Race 2 at the Mount Panorama 500 on Sunday 28 February 2021, the CTM directed the removal by Image Racing of the engine from its Car 49, a VF Commodore. The engine was sealed and transported to Supercars’ Technical Facility at Meadowbrook where it was examined by the Supercars Engine Projects Manager (EPM). The EPM ran the engine on the Supercars dyno and found that it produced an “accumulated engine power number” (AEP) which exceeded the maximum AEP approved by Supercars for a VF Commodore engine.

The VCS (Division C) and DS2 (Division G) Rules mandate that Cars must only be fitted with an engine as detailed in an Engine Specification Document (ESD). An ESD does not quote an AEP. However, the HoM and the EPM explained, and it was not in issue, that Supercars will not issue an ESD for an engine if, when tested on the Supercars dyno, it produces an AEP in excess of a predetermined maximum. Every ESD sets out the process that must be followed in the event that a Competitor seeks to vary an ESD which has been issued for a particular engine design. That process clearly explains that no application for a variation to an ESD will be approved if the component changes the subject of the variation application would produce an AEP in excess of the maximum approved by Supercars.

The engine removed from Car 49 on 28 February 2021, a Holden Aurora Engine, was supplied to Image Racing by Walkinshaw Andretti United (WAU) under a supply contract between the parties. Supercars’ records indicate that Engine WR62 was last used by WAU in a VCS event in 2019 and was claimed by WAU at that time to conform with ESD No. SC-2-305 (2019 Update). ESD SC-2-305 is just one of a number of ESDs issued to WAU for Holden Aurora Engines. The EPM gave evidence that WR62, after it was removed from Car 49, does not conform to SC-2-305, not only because some components on the engine are inconsistent with the specifications in the ESD, but also because that ESD was issued to WAU after the test engine supplied to Supercars for homologation via that ESD was tested on the Supercars dyno before the ESD was issued and yielded an AEP which was less than the maximum approved AEP. No application was ever submitted by WAU to vary ESD SC-2-305 to change any of the homologated components specified in that ESD and, had such an application been lodged, it would have been rejected for reason that the changes yielded an AEP in excess of the approved maximum.

The Stewards heard some evidence suggesting that the supplying Competitor had made verbal enquiries of Supercars Technical personnel at some point during 2020 regarding a possible change of components on WR62. These suggestions were disputed and cannot assist Image Racing in any event because, as part of Image Racing’s evidence to the Hearing, its Authorised Representative tendered email communications between a representative of WAU and the EPM from February 2020. At that time the representative of WAU had sought approval from the EPM to remove the seals on engine WR62 and in that context sought clarification from the EPM regarding the engine rules for DS2. In his written response, the EPM had expressly warned the representative of WAU that DS2 engines must conform with an ESD and must not exceed a maximum AEP he quoted. That warning reflected the DS2 Technical Rules as they were at the time and remain. As noted above, the AEP of WR62, as removed from Car 49, exceeds that number.

Rule G8.1.2 provides that “Cars must only be fitted with an engine as detailed in an ESD relevant to that make of Car”. Because of his conclusion that WR62 as removed from Car 49 did not conform with ESD SC-2-305 (the ESD to which WR62 had historically been claimed to conform), the EPM requested that WAU produce the ESD to which WAU claims WR62 now conforms. No ESD was produced by WAU and Image Racing cannot supply one because it relies on WAU to build, supply and maintain its engines, including WR62, and to ensure that all relevant documentation regarding those engines is kept by WAU.

There is no contest about the AEP which WR62 produced when it was removed from Car 49. Nor is there any contest that this AEP exceeds the approved maximum AEP. We note that a representative of WAU was present when WR62 was tested after it was removed from Car 49. The Authorised Representative of Image Racing submitted, and called evidence from a representative of WAU in support, that there are ambiguities in the Rules regarding permitted engine specifications for use in DS2. We reject those submissions. While there are differences between the VCS Technical Rules and the DS2 Technical Rules with respect to record keeping, both Division C and Division G clearly mandate that an engine in a Car must conform with an ESD. The onus is on the Competitor to quote and produce an ESD to which they claim an engine in their Car conforms. Further, although in this case Image Racing had no involvement in the build of the engine used in Car 49, WAU had been expressly warned in an email from the EPM in February 2020 that engines in DS2 Cars must conform to an ESD and must not exceed a quoted maximum AEP.

In the circumstances, we find that the engine used in Car 49 at the Mount Panorama 500 is not an engine as detailed in an ESD relevant to a VF Commodore and, therefore, Rule G8.1.2 was breached.

Even though Image Racing had no involvement in the build of WR62, Rule A4.3.2 makes clear that the Competitor who enters a Car must ensure that their Car complies with the Rules throughout the Event. Further, in compliance with Rule A4.3.3, the Authorised Representative of Image Racing signed a Declaration of Conformity for Car 49 before competition commenced at the Mount Panorama 500 which contained an acknowledgement that if any aspect of the Car was found to be in breach of the Rules, it would render the Competitor in breach of the Rules.

Having found the breach established, we turn to the question of penalty. The Race Director had recommended a Penalty of Disqualification of Car 49 from Race 2 at the Mount Panorama 500. The Authorised Representative of Image Racing submitted that such a penalty would be harsh and requested that the Stewards consider a lesser penalty. He pointed to the fact that his Team, Image Racing, has no history of having ever committed a Technical breach of the Rules in DS2. He submitted that, while the Team is deemed to take responsibility for the breach under the Rules, it was the supplying Competitor which had supplied a non-conforming engine. He also submitted that Image Racing had no knowledge that the engine was non-conforming, and no reason to suspect it might be, and that a penalty of Disqualification would mean that the Driver of Car 49 at the Mount Panorama 500, Jordon Boys, would be stripped of his maiden race win in DS2.

We accept that Image Racing has a previously unblemished record in this Category and that it was reliant upon WAU to supply a complying engine. However, the Recommenced Penalty for a breach of a Technical Rule is, and has always been, Disqualification. There is no reason to depart from that longstanding policy. While the AEP of the subject engine when tested was not grossly in excess of the approved maximum, it exceeded it by a factor which yielded a performance advantage for Car 49.

We understand that WR62 was run in Car 49 in Race 1 at the Mount Panorama 500. However, WR62 was not tested after Race 1 and we received no evidence from which we could conclude without hesitation that the engine when used in Race 1 exceeded the approved maximum AEP. We do not know if any free components were changed between Race 1 and Race 2 or when it was last refreshed and the extent to which (if any) the engine had “relaxed” since such a rebuild. In these circumstances, we concur with the recommendation of the Race Director and impose a Penalty of Disqualification of Car 49 from Race 2.

We also direct that the Final Classifications for Race 2 be amended accordingly.

Issued by the Stewards who conducted the Hearing: