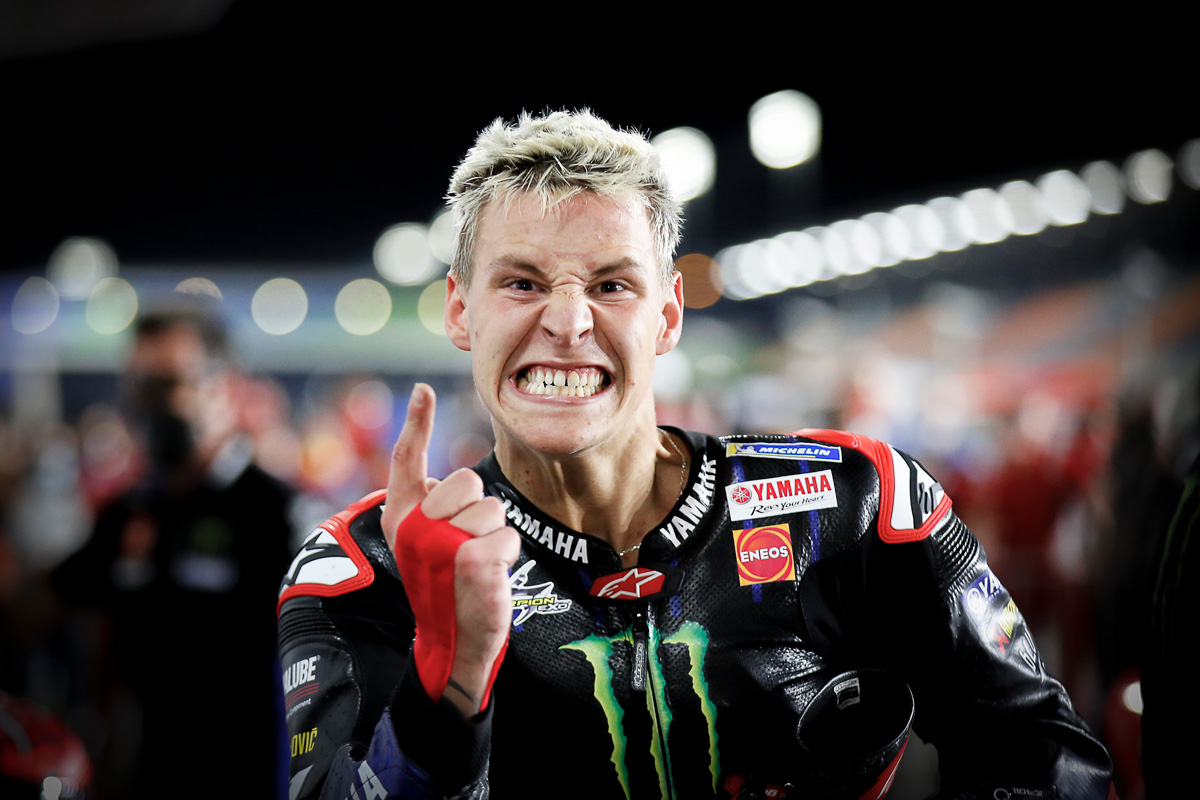 Fabio Quartararo has won a nail-biting Grand Prix of Doha as Jack Miller’s slow start to his title-aspiring campaign continued.

Round 2 of the MotoGP season produced thrilling action, with less than 6.5 seconds separating a 14-strong lead pack by race end.

In fact, the race made MotoGP history with the closest top 15 (covered by 8.928s) ever.

Pramac Racing duo Jorge Martin and Johann Zarco made the most of their front-row performances in qualifying to control the race for the majority, until Quartararo sliced his way through, having started fifth.

The 21-year-old held a slender advantage heading into the final lap and that was enough to make it stick, taking the chequered flag 1.457s ahead of Zarco.

That result represented France’s first double podium in the premier class since 1954.

“I’ve not won a lot of races but this one was such a special win,” said Quartararo.

“I came from eighth or seventh, and I saw the pace and track were totally different from FP4 and Warm Up and I decided to really keep the tyre for the end… it’s such an amazing moment for me, it’s a dream.

“I always dreamed of winning in Qatar, unfortunately it was not the first [round] but the second!

“Thanks to everyone who believed in me, I’ve worked a lot in this preseason to achieve this goal and the media always tell me it’s extra pressure to take the place of Valentino [Rossi]!

“I want to thank my family, Yamaha, my friends, and I’ll enjoy this moment with a nice McDonald’s tonight!”

Zarco got the upper hand in the Pramac squabble by just 0.043s from rookie Martin, who secured his maiden podium.

Next best was Alex Rins, the Suzuki rider getting the better of an entertaining scrap with Qatar GP winner Maverick Viñales.

Miller and Mir had both run inside the top six until making contact on the straight, the culmination of an intense exchange between the duo.

The Australian, who qualified fourth, now has two ninth-place finishes to start a season in which many regarded him as a title favourite.

Accordingly, he is ninth in the standings on 14 points, already 26 behind leader Zarco.

Quartararo now holds a share of second overall with Viñales on 36, while Miller’s team-mate Bagnaia is fourth.

Portimao will host Round 3 of the championship, the Grande Premio 888 de Portugal, in a fortnight.