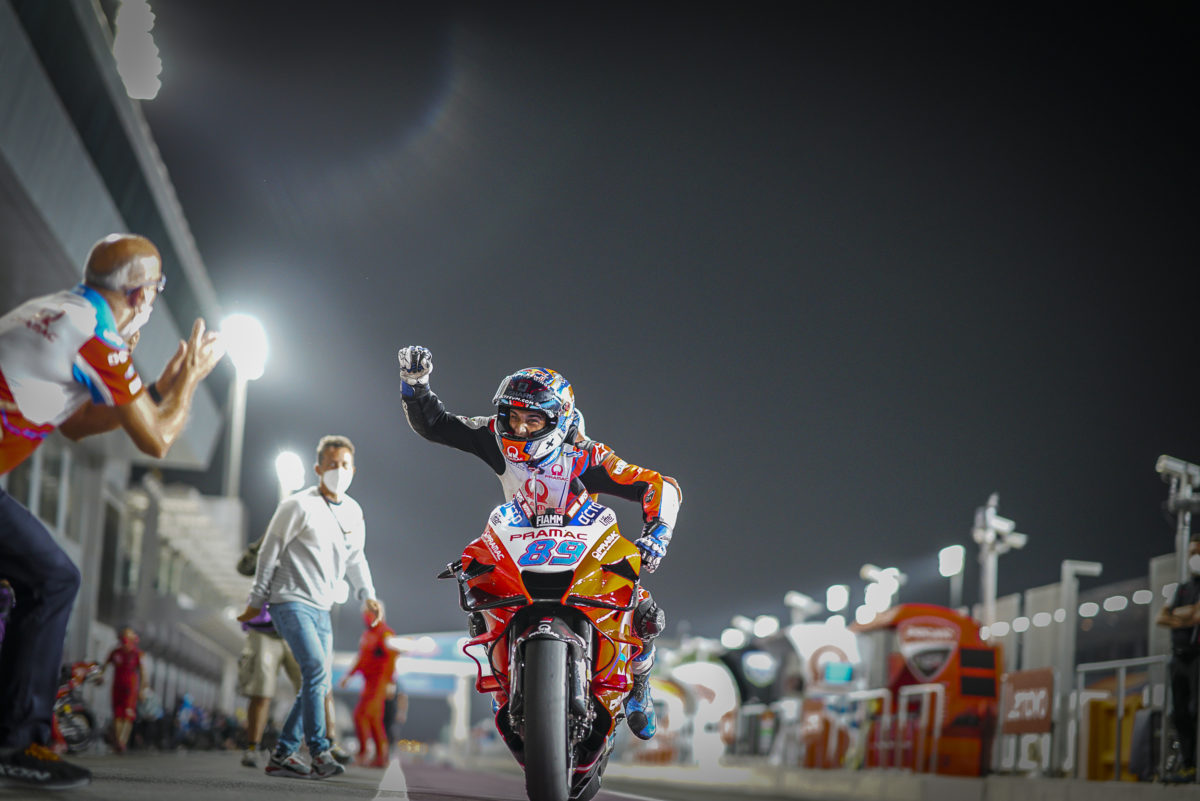 Rookie Jorge Martin has qualified on pole for tonight’s Grand Prix of Doha in only his second MotoGP appearance.

The Pramac Ducati rider won out in a session that saw Franco Morbidelli and Maverick Viñales both spend time at the top of the timesheets.

However, a late effort from the 23-year-old saw him record a maiden pole position, 0.157s clear of team-mate Johann Zarco.

“On the first run I was behind Mir and I felt super confident, I was catching him so fast and I thought, ‘okay I need to be behind a faster bike’.

“I was hoping to be behind Pecco [Francesco Bagnaia] but he wasn’t pushing a lot so I thought, ‘ok it’s my time to push, time to demonstrate who I am’. And for sure I didn’t expect to get pole!

“I expected to be top four, top five, and when I finished the lap and I was up there in first. It’s unbelievable.

“Tomorrow is another day to learn, because for sure it’s not my day to win, but if we can fight for the top six it would be great and I’d be super happy.”

Martin had set the pace early in Q2, his first appearance in qualifying, only for his initial effort to be toppled by Morbidelli.

The Yamaha rider’s time at the front was short as Martin improved on his next lap, a 1:53.587s.

Fabio Quartararo came close to Spaniard’s time, but fell 0.017s shy as the first wave of laps were completed.

It was then Viñales’ turn to move to the top of the timesheets, the Yamaha rider climbing from ninth after his opening run.

However, late laps from Zarco and Martin saw him dethroned, the former recording a time just 0.004s quicker to go fastest.

Martin then laid down a 1:53.106s effort, without the benefit of a tow, to reclaim top spot and secure his maiden MotoGP pole position.

He’ll be joined on the front row by Zarco and Viñales, with Jack Miller set to line up fourth on the factory Ducati.

Joan Mir survived Q1 to end up ninth on the grid, Miguel Oliveira also making the progression and will line up 12th.

A dismal session for Valentino Rossi saw the veteran record the worst qualifying result of his MotoGP career.

The Italian ended the session more than 1.7s off the pace, and will line up as the 21st of the 22 riders in the race.

The Grand Prix of Doha gets underway at 03:00 AEST on Monday morning.