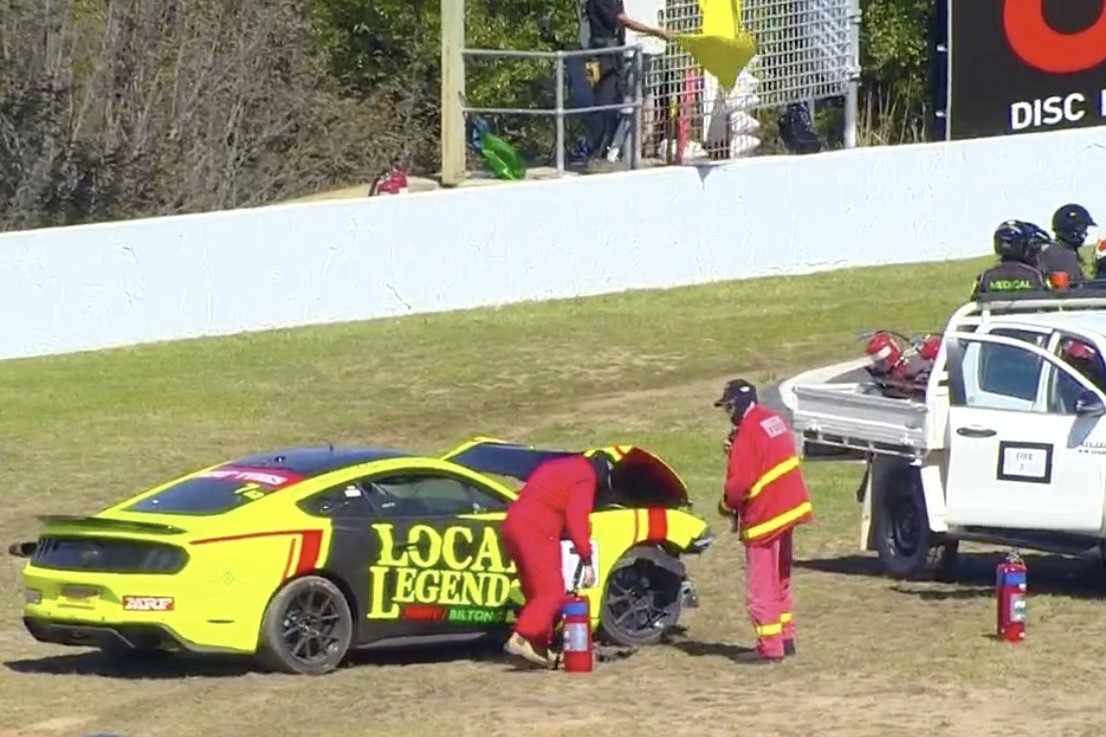 The #7 Mustang of Grant Denyer, Tony Quinn, and Tim Miles is out of the Hi-Tec Oils Bathurst 6 Hour after a crash for the latter at The Chase.

Miles, who was running in eighth, lost control off the right-hand sweep on Lap 30 and made front-on contact with the concrete wall before coming to rest on the outfield run-off area.

While he had a tight entry having passed another Mustang down Conrod Straight, he was in fact distracted by an alarm, according to Denyer.

“We saw a thumbs up from him in the car and we just spoke to him,” said Denyer, who started the race and climbed to fifth from 13th on the grid.

“He said a little alarm came up on the screen and distracted him while he was just going through the kink in The Chase. He was just on the brakes a second too late.

“I just feel for him, I know how devastating that is, and I’m glad that he’s just OK. He’s a legend of the sport and he looks after a lot of young drivers and he helps them through their career.

Onboard with Tim Miles who crashed HEAVILY into the wall on the fastest part of the track #B6HR pic.twitter.com/KP0lx5enSb

Quinn, who owns the car, said, “It’s really gut-wrenching, I would say, because I thought we were in with a good chance.

“We just needed to keep it close to the front and then we’ve done a pit stop and we were ready for the next change.

“Just a bit disappointing within five minutes to be in the wall, so, bugger.”

Denyer added of his stint, “It was absolutely wild, I loved it.

“Made some cool pasing moves, the car had great pace, and I think we would have been contenders potentially at the end, but it’s a long way away.