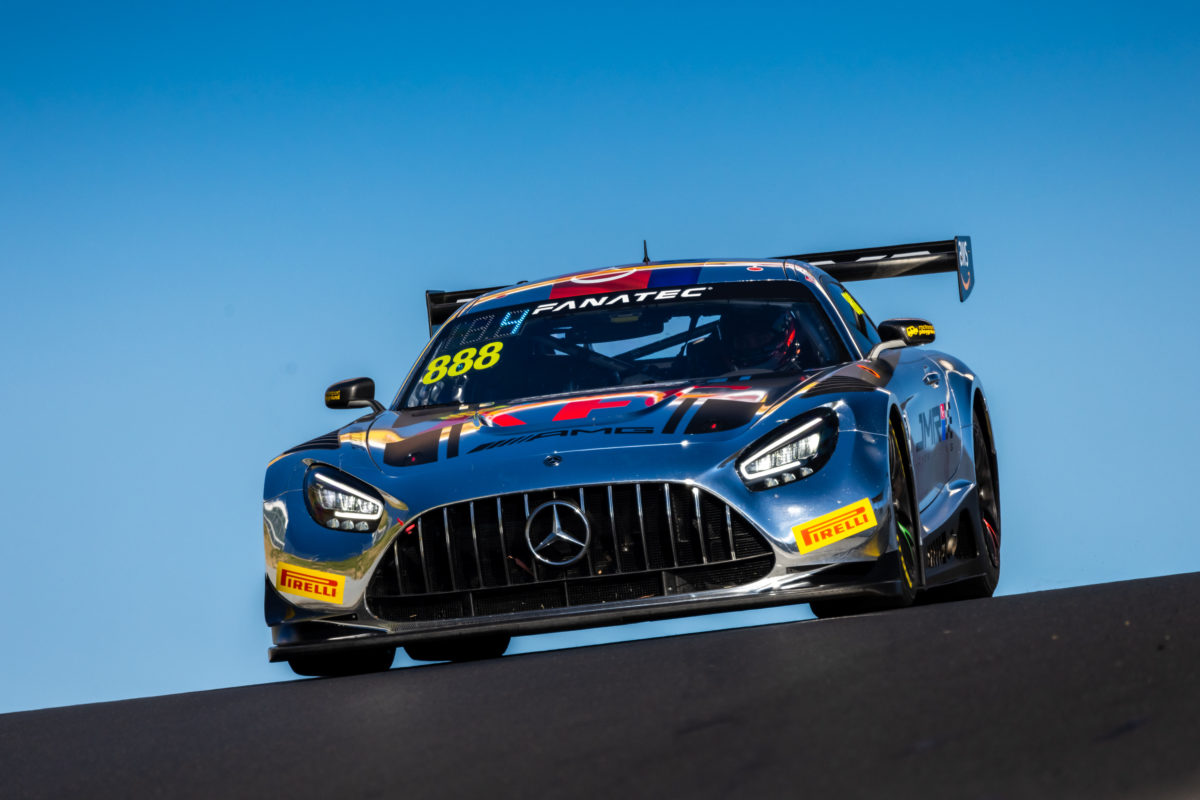 Last year’s Bathurst 1000 winner left his effort late to edge out Chaz Mostert by 0.2274s as the chequered flag waved, with Garth Tander a further 0.4274s back in third.

Stephen Grove began proceedings with the fastest time as qualifying began recording a sedate 2:17.9897 midway through the opening part of the two-part qualifying session.

Prince Jefri Ibrahim briefly moved to the top of the standings, but was usurped in quick order by Brett Hobson, Yasser Shahin, Grove, and Nick Kelly.

Hobson’s best to that point, 2:09.9812, was just shy of a second faster than Shahin, and more than four seconds clear of his nearest Trophy class rival.

Not satisfied with that, Shahin went for another late effort.

With two minutes remaining he set the best time of the session at the first split, backed up as he crossed the top of the mountain.

That was how the first phase of the session ended, with Shahin (GT3 Pro-Am) from Hobson (Trophy), Tony Bates (GT3 Pro-Am), Schumacher (Trophy), and Tony Quinn (GT3 Am).

Fastest out of the gates as the second phase began, Shane van Gisbergen banked a 2:06.8265 to open the 20-minute session.

The became a 2:05.3694 next time around, as Brenton Grove climbed to second ahead of Mostert.

A lap later and the pace had lowered again, this time to a 2:04.3662, van Gisbergen more than a second clear of the pack headed by Grove.

Tander had built up in his first lap to record a 2:05.6273 on his second tour, Mostert falling to fifth as Paul Stokell improved in the Trophy-spec Audi to slot in fourth.

Mostert went fastest next time through, improving on van Gisbergen’s best in all three sectors to record a 2:03.6767.

The Triple Eight driver had taken to the lane, emerging soon after for a second run.

Tander was next to best the man with whom he won last year’s Bathurst 1000, climbing to second with a 2:04.1969 with six minutes remaining.

The Australian GT race winner continued to push on, going fastest of anyone to the first split.

Meanwhile, behind him on track, Mostert was doing likewise.

Tander’s lap saw him improve his time, but not his position, while at the top of the timesheets Mostert laid down a 2:03.0904 to edge 0.4274s away from his Audi stable-mate.

Van Gisbergen’s final run began with three-minutes remaining, though the Mercedes driver didn’t set the world alight in the first split – 0.4s down on Mostert’s best of the session.

It proved to be a warmup lap, as van Gisbergen commenced his final lap with less than a minute to run.

Tander was also on track, though touring back to the pits, while Mostert had already taken to the lane, satisfied with his session.

With the chequered flag out, the Triple Eight driver flashed across the line to record a 2:02.8630 to secure pole position.

It left Mostert second from Tander, while David Wall claimed fourth best from Grove in fifth.

A 60-minute race now awaits teams, the first of the weekend’s two encounters, scheduled for 14:15 this afternoon.