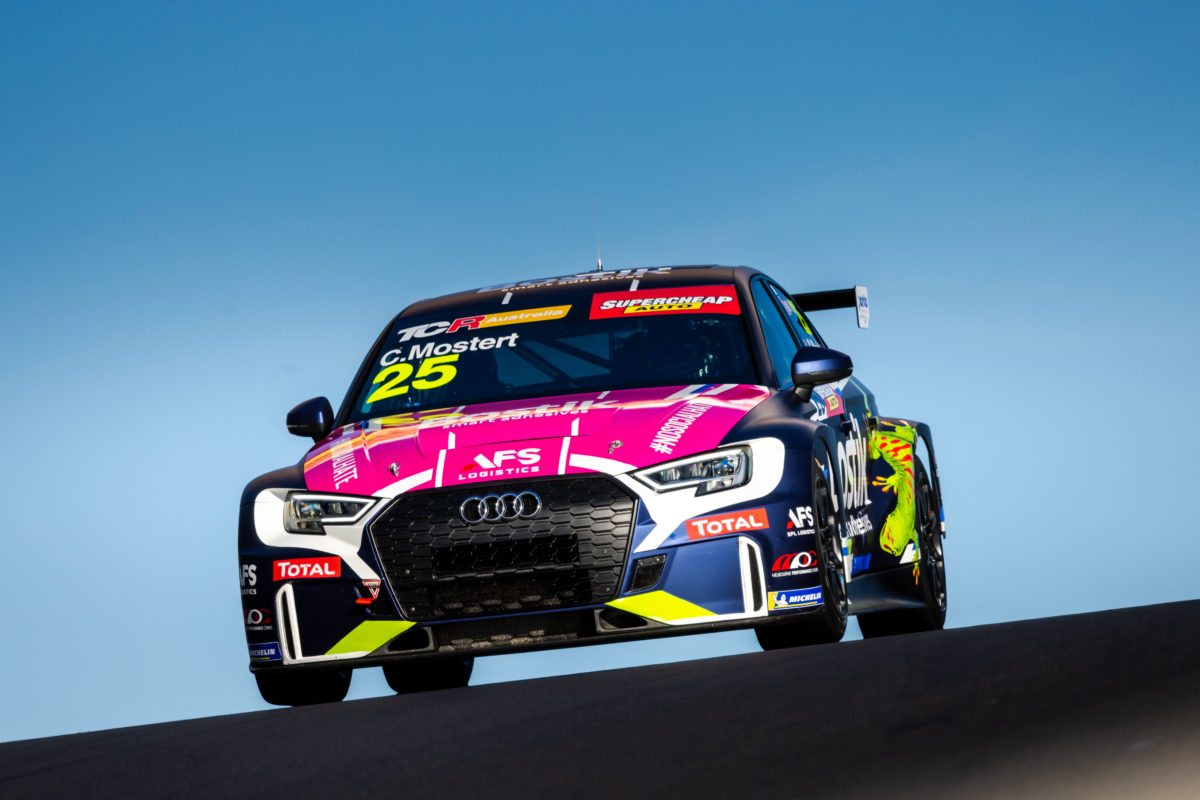 Chaz Mostert has survived a brush with the wall to run down Aaron Cameron and win the first ever TCR race at Mount Panorama.

The fight for victory in the Supercheap Auto TCR Australia Series’ Round 3 opener was a race in two between the front row starters, with Garth Tander taking a lonely third.

Cameron had in fact got the jump on pole-sitter Mostert after a long hold at the start of the 10-lap contest, and was two seconds to the good after just two laps.

However, the Peugeot driver found himself under pressure from the #25 Audi as the race reached halfway, and began to play defensive.

Mostert was right up behind the #18 308 when he glanced the wall exiting The Cutting on Lap 7 but that was only a temporary reprieve for Cameron.

The Garry Rogers Motorsport pilot had the nose of a blue RS 3 on his inside when they got back down to Murray’s Corner and Mostert made the pass along pit straight.

Once released, the series leader quickly established a one-second advantage of his own and essentially maintained it for the balance of the race.

Mostert also earned the bragging rights of the fastest TCR lap of the weekend so far, a 2:14.8162s on Lap 5 which just beat Rickard Rydell’s pole lap at the 1998 Bathurst 1000 for Super Tourers.

“The car was pretty quick in qualifying so it’s good to be able to convert it,” said the Audi driver.

“He was super quick across the top, so I tried everything to use the strengths of my car to catch him, but in the end I’m just glad to sneak past him.”

On the contact with the wall, he explained, “Sometimes these cars get away from you a little bit. It’s not normally the rear like in a normal car; obviously the front goes away.

“So, obviously, just trying to catch him, get as close as I can across the top, and just close enough down the bottom to get him.”

Tander, in his first start of the season, ran third all the way in the #75 Audi and took the chequered flag 4.4s behind the winner.

Jay Hanson ended up fourth while fellow Alfa Romeo driver Lee Holdsworth climbed from eighth out of the first corner to finish fifth.

John Martin (Honda) claimed sixth thanks to a move on Brad Shiels (Hyundai) with a lap to go, and the latter remained seventh thereafter.

Luke King (Audi) took eighth, Jordan Cox (Alfa Romeo) drove to ninth from the back of the grid after causing a red flag in qualifying, and Tony D’Alberto (Honda) rounded out the top 10.

Dylan O’Keeffe was running sixth when his Renault slowed on Lap 9 and he was ultimately the sole non-finisher.