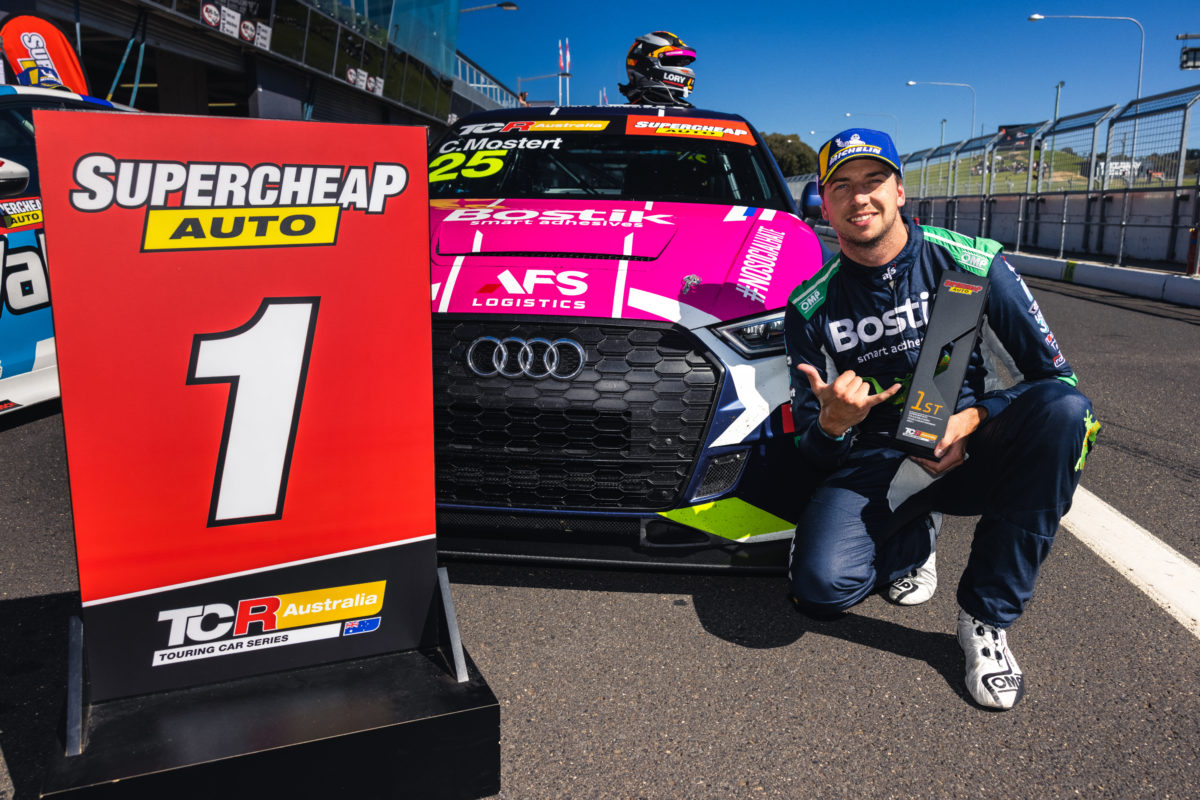 In an encounter which unfolded extremely similarly to that which was held hours earlier in the day, Mostert (Audi) gave up a sizeable early margin before overhauling Aaron Cameron (Peugeot).

Garth Tander (Audi) again finished a few seconds back in third and an Alfa Romeo wound up fourth, although this time that was Jordan Cox, who put on a highly entertaining drive.

Cameron took a clear lead to Hell Corner when the lights went out, ahead of Mostert, Jay Hanson (Alfa Romeo), Tander, and John Martin (Honda).

There was a spectacular moment on Conrod Straight on Lap 1 which was triggered when Lee Holdsworth (Alfa Romeo) put a move on Brad Shiels (Hyundai) for sixth at Forrest’s Elbow.

Cox used the double tow to blaze past both as they went three-wide along the drag strip, and Holdsworth ended up behind Shiels again.

Up front, Cameron got almost three seconds clear of Mostert before the series leader once again started to reel in Car #18.

Mostert got the move done a little earlier than was the case in Race 1, going inside of Cameron into The Chase on Lap 5 and driving away to a 3.0s victory in the five laps which followed.

Tander had already been pressuring Hanson for third when they went side-by-side into Griffins Bend.

Hanson looked like he would be able to hold position but copped a hit from Cox in the mid-corner and quickly came to a halt.

Cox remained fourth thereafter, not mounting a challenge to Tander, while Martin ended up fifth.

Holdsworth took sixth having eventually managed to make a move on Shiels stick, at The Chase on Lap 8, and James Moffat (Renault) followed at Hell Corner next time around.

Dylan O’Keeffe (Renault) finished 19th, one lap off the pace, after a recurrence of the turbo wastegate problems which saw him retire from Race 1.

Tony D’Alberto was not classified a finisher given he dropped three laps relative to Mostert, reportedly due to suspension damage and then a flat tyre for his Honda.

The third and final race of the weekend is due to start tomorrow at 10:12 local time/AEST (Note: Daylight savings ends in New South Wales).

CLICK HERE to watch the Supercheap Auto Highlights of Race 2