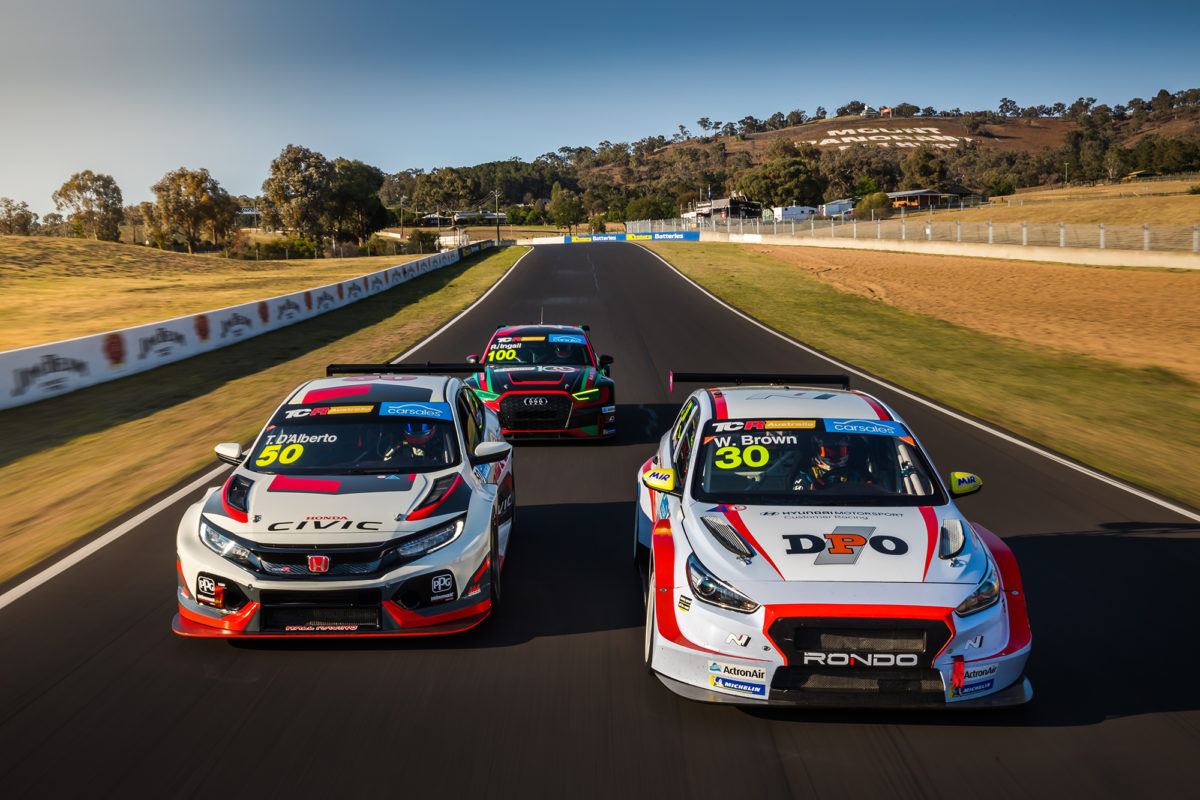 A media shoot for TCR Australia at Mount Panorama

Lee Holdsworth believes that the Supercheap Auto TCR Australia field will put on pack racing at Mount Panorama due to the sizeable slipstreaming effect.

This weekend’s third round of the season, which supports the Hi-Tec Oils Bathurst 6 Hour, marks the belated first ever TCR race event on the mountain after the cancellation of last year’s 6 Hour and Bathurst International.

With a 1.1km drag along Mountain Straight and 1.9km back the other way on Conrod Straight, Holdsworth believes it will be difficult to break free from the field.

“This is the first time that TCR Australia are here at the Mountain, the greatest race track in the world arguably, so it’s going to be an unreal spectacle,” said the Alfa Romeo driver.

“It always is around here in any race car and in these little beasts, I would imagine it’s going be pack racing because of the tow you’ll get up Mountain Straight and down Conrod.

“No one is going to be able to get too far away but you always hang these things off the wall, every time you get around this track you’re pushing to the limit and I’m just looking forward to taking the little Alfa around and getting 100 percent out of it.”

Holdsworth has started the Bathurst 1000 17 times, finishing on the podium in 2009, and the Bathurst 12 Hour seven times, taking three class podiums.

However, Mount Panorama did not host a sprint event during his run as a full-time Supercars Championship driver, making for a different experience this weekend for the Ashley Seward Motorsport pilot.

“It’s going to be completely different. Obviously, the aggression side will be up because every corner counts in the first couple of laps whereas in an endurance you take your time with that sort of stuff.

“The aim here is to qualify well, that will be the ticket to getting good results over the weekend. We’ll focus on one lap pace and just doing as good of a job as we possibly can so we can claw back some points on that Mozzie bloke [current series leader Chaz Mostert].

“It’s just awesome, everyone wants to come race here, all around the world and to have five events and building on it per year is just awesome for New South Wales, Bathurst, fans and obviously great for the race drivers.”

Holdsworth is third in the Supercheap Auto TCR Australia Series, which resumes with Practice 1 tomorrow at 08:35 local time/AEDT.