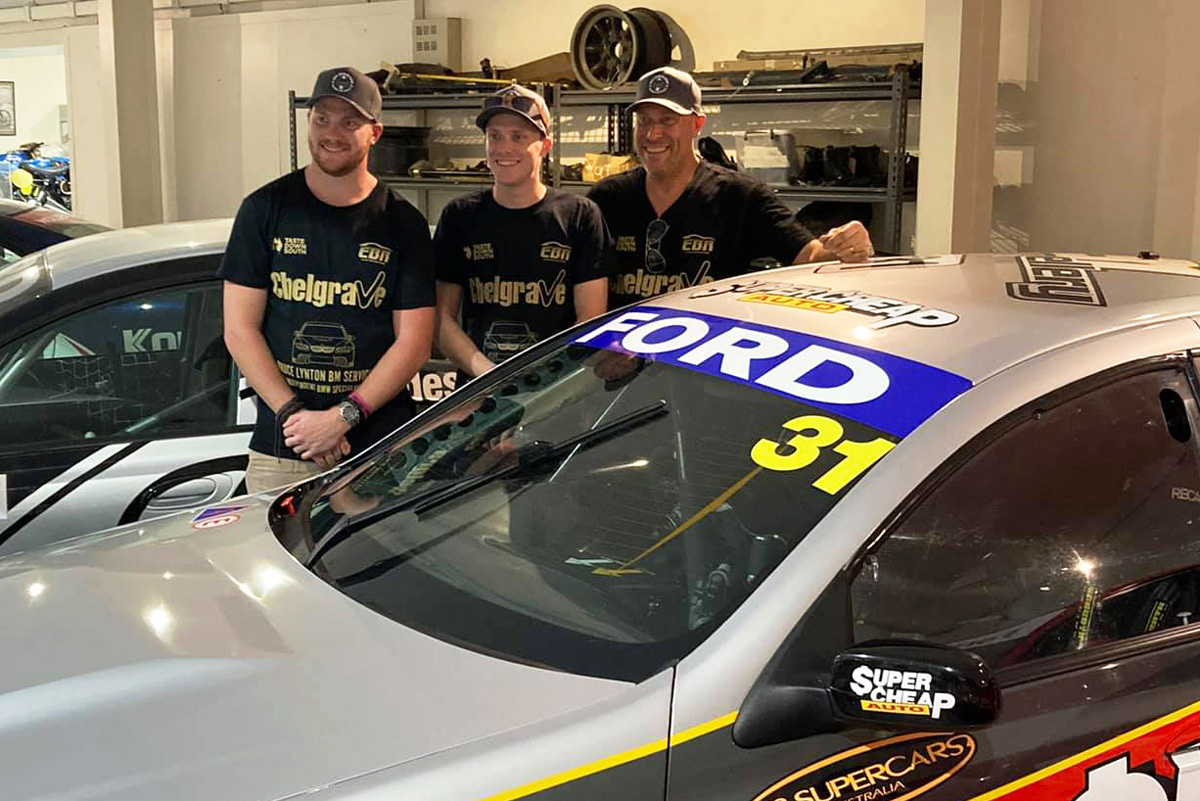 Steven Ellery (right) and his sons with the BA Falcon he drove to third place in the 2003 Bathurst 1000. Picture: National Motor Racing Museum/Facebook

Steven Ellery will look to pass on his wisdom to sons Dalton and Tristan when the trio team up for the Hi-Tec Oils Bathurst 6 Hour this weekend.

The family team will be one of eight top-tier Class X cars in the field for the main event on Sunday, steering a Bruce Lynton BM Service BMW M3.

It represents a maiden chance to race at The Mountain for Dalton, 25, and Tristan, 23, having grown up watching their father contest the Great Race year after year.

All up, Steven made 15 starts in the Bathurst 1000, taking three podiums.

The last of those came as a primary driver for Triple Eight Race Engineering in 2005, when he was Craig Lowndes’ first full-time team-mate at the now mighty Brisbane squad.

The Gold Coaster’s return to racing comes after a 13-year hiatus, with the opportunity to tackle Mount Panorama with his sons too good to pass up on.

“That’s what I am doing it for, I haven’t jumped back in the car just for myself,” he reiterated to Speedcafe.com.

“The opportunity was there – the boys have been running that car all of last year and they did really well and I just thought it was probably better to do it sooner rather than later.

“It’s always been a dream of mine, if I ever had the opportunity to share a car with the boys for a 6 Hour or 12 Hour or something at Bathurst.

“I’m just really looking forward to it and having a good weekend with the boys.

“I’ve got no idea what is going to happen on Sunday but I don’t really care, we’re just here to have a good time and enjoy it and finish, wherever that is.”

All three Ellerys have spent time behind the wheel at a recent Sydney Motorsport Park meeting, running on MRF tyres to best prepare for the Bathurst event.

Ellery Snr, 46, described Mount Panorama as a “very special place for our family”.

“It’s been kind to us, but it’s been the meanest place in the world to us as well – but it is that, isn’t it?” he mused.

“If you grow up in Australian motorsport, the goal is to drive at Bathurst someday.”

The prospect of 60-plus cars on the grid for Sunday’s race brings with it flashbacks to his younger years.

“The first Bathurst I did in ’93, I don’t know how many cars were here but it was a standing start and I started up around the corner!” Ellery laughed.

“So I’m presuming the rolling start is going to be pretty similar.

“It’s going to be really cool to see that many cars here. Just being here today and seeing how full the pits are is amazing.

Opening practice for the 6 Hour competitors will begin at 10:20 AEDT/local time tomorrow.