Turn 1 is one of the areas being modified

As Speedcafe.com revealed, the Melbourne circuit is undergoing works ahead of the rescheduled 2021 event with several areas receiving attention.

It’s predicted lap times in qualifying will tumble from 1:21.0s to 1:15.8s, with average speeds increasing by 15km/h.

A fourth Drag Reduction System (DRS) zone is also a possibility on approach to Turn 11, where cars are tipped to approach 330km/h.

Key to that is work at Turn 6, with the right-hander opened up as part of the works currently being undertaken.

The changes to the circuit are hoped to spice up the action at Albert Park, a venue which has historically produced somewhat processional racing.

Works on the venue are the second part of a three-phase plan, the first of which was to widen pit lane.

The final aspect of the project will follow the 2021 event, when the complete circuit will be resurfaced for the first time since 1995.

The works currently being carried out will see a dramatic change in the profile of the circuit, with organisers expecting it will be officially reclassified as having 14 corners later in the year. 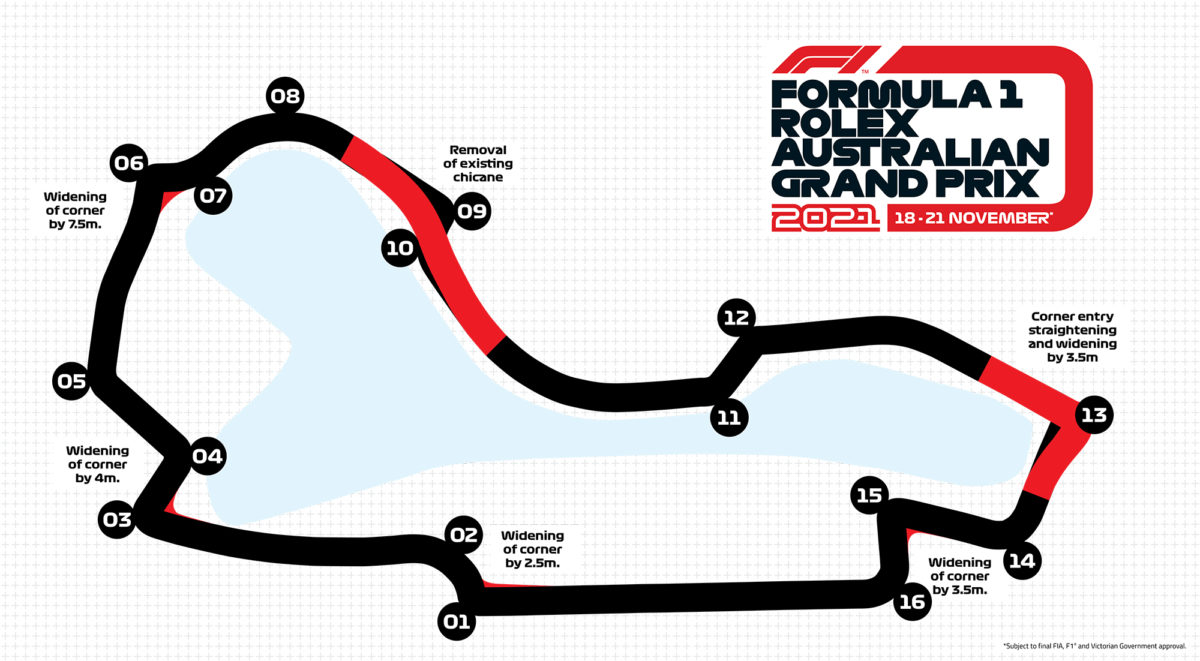 A map showed the modifications to Albert Park

“These circuit modifications mean faster racing with plenty of new opportunities to battle it out – come November, the Formula 1 Australian Grand Prix will be back and better than ever,” said Australian GP Corporation CEO, Andrew Westacott.

“Since the 1950s Albert Park has been synonymous with grand prix racing with these upgrades aligning perfectly with the changes in specifications of the Formula 1 cars in 2022.

“While the project will make for more exciting racing, it also enhances the roads and surrounding facilities for community use beyond the event for years to come.”

Mark Skaife, who was involved in the project courtesy of iEDM, added: “iEDM has a long and proud history in producing world class motorsport events – we’re thrilled to have partnered with the Australian Grand Prix Corporation to deliver this exciting upgrade to one of Formula 1’s most iconic circuits.”

CLICK HERE to see all the changes from the air

The Formula 1 Australian Grand is scheduled for November 19-21.