Horner and Verstappen in conversation

Drivers and teams were left puzzled and frustrated by the application of track limits rules during the Formula 1 Bahrain Grand Prix.

Lewis Hamilton won the race from Max Verstappen, despite the former finding a way through at Turn 4 with three laps to run.

However, the Dutchman was deemed to have exceeded track limits and was instructed by his team to give the place back to the Mercedes driver.

Heading into the weekend, FIA race director Michael Masi advised teams that track limits would not be monitored for lap time.

That position changed following opening practice, where the exit of Turn 4 would be monitored, and lap times deleted if limits exceeded.

His revised notes explicitly stated that the limits would not, however, be monitored for lap time during the race but would be covered by Article 27.3 of the Sporting Regulations.

That effectively states that drivers cannot deliberately leave the confines of the race track and gain a lasting advantage – essentially stating that track limits would be enforced via different means.

In the race, Hamilton and his team-mate, Valtteri Bottas, frequently ran wide at Turn 4 without warning or punishment in the opening stages.

Later in the race, Hamilton was warned against taking continued liberties at the right-hander, a point he quizzed the team about at the time.

At Red Bull, Verstappen was advised to use more track after the team caught wind of Mercedes’ initial approach.

“Throughout the race I was told that people were going wide, so they told me to do the same because you do gain lap time doing it,” Verstappen explained.

“So I did and then [at] one point they told me not to do it anymore.

“I know in qualifying of course it was not allowed – your lap time got deleted – so I don’t know how it got to the point where people were doing it without getting warnings.

“But at the end of the day, when I was fighting Lewis, I went outside of the track limits, so I think quite quickly the race director was onto us to tell me to give the position back, so that’s exactly what I did.”

The interpretation made by Mercedes and Red Bull was the same as that by McLaren, where the team believed it was fair play to run wide of the confines of the circuit at Turn 4 provided a driver didn’t improve his position. “My understanding was that it’s not a big deal if you go further than this, as long as you don’t gain an advantage on your position,” said team principal Adreas Seidl.

The advice Red Bull gave to Verstappen, that he should cede the lead of the race back to Hamilton in the closing stages, was a critical moment.

It’s also one which left team boss Christian Horner frustrated by the perceived inconsistencies in applying the track limits rules.

“We could see as soon as Mercedes started to push they just used that part of the track and we questioned with race control; if that’s the case, can we do it?” he said.

“When you’re in a nip and tuck battle, there’s a two tenths advantage using that part of the circuit, so they did it lap after lap.

“The race director then asked them to respect the limits, otherwise they would get a black and white flag.

“Obviously Max then ran wide on the pass there. But it had been made clear before the race that if somebody got an advantage by going out there, they’d have to give it back.

“So he did that immediately when the team instructed him to.

“I think with these track limits, they are always going to be contentious, but we do just need to have a consistent situation,” he added.

“You can’t say it’s okay to use it in a race but you can’t overtake out there. They should be black or white. They shouldn’t be shades of grey.” 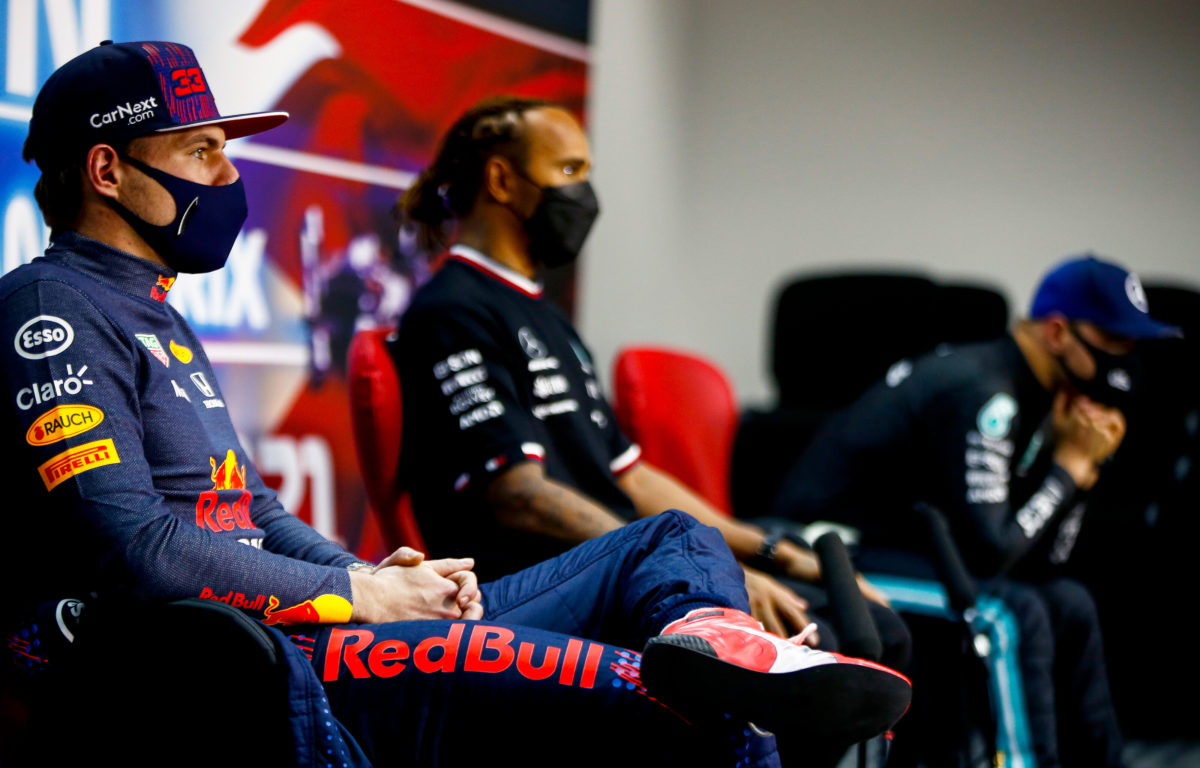 Verstappen during the post-race press conference in Bahrain

“With regard to the tolerance given to people running outside of the track limits during the race, it was mentioned very clearly in the drivers’ meeting and in the notes that it would not be monitored with regards to setting the lap time, so to speak,” the Australian explained.

“However, it will always be monitored in accordance with the sporting regulations being that a lasting advantage overall must not be gained.

“We had two people that were looking in that area, at every car, every lap, and pretty much every car bar one was doing the right thing within what we expected in a general sequence.

“There was the occasional car that had a bit of a moment that went out there or whatever it was, but it wasn’t a constant thing.”

Though acknowledging that the track limits rules can be difficult for fans to follow, Seidl suggested there is no problem so long as the rules were clear and enforced consistently.

“Of course what the rules were was clarified for each track a bit be differently – yeah that’s not great, but all the tracks are also a bit different so as long as it’s there,” he ventured.

“I get your point in terms of the spectators, it’s not easy to get, but let’s say purely from the sporting aspect between us on the competition side, as long as the ruling is clear for each track and each corner and gets, let’s say, monitored consistently, and policed consistently in the same way, I’m fine with it.”

Formula 1 heads to Italy for the Emilia Romagna Grand Prix next, held on the Imola circuit, on April 16-18.