Hamilton hangs on in Bahrain thriller

Hamilton hangs on in Bahrain thriller 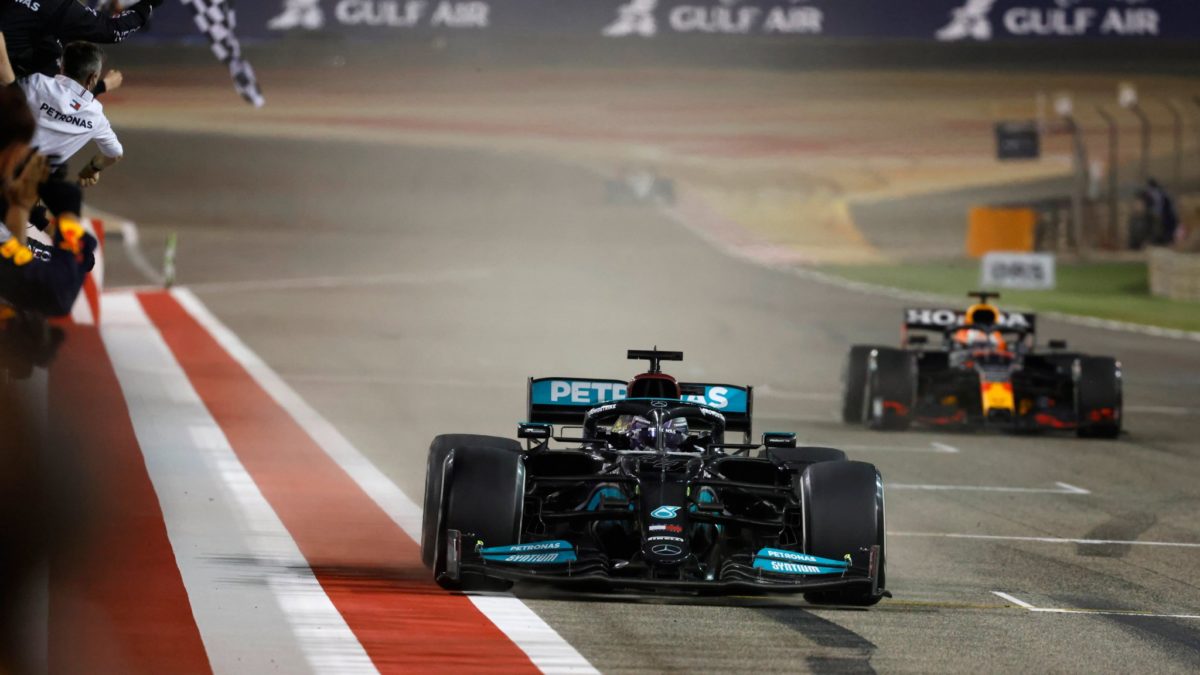 Lewis Hamilton has hung on to win a nail-biting Formula 1 Bahrain Grand Prix from Max Verstappen.

Mercedes used strategy to gain track position over the leading Red Bull, with Hamilton holding on to the advantage in a thrilling sequence of laps at the conclusion of the race.

Verstappen did manage to find a way through with a handful of laps remaining, though he was told to give the place back after exceeding track limits to get the move done.

From there, his challenge was blunted, and Hamilton was able to maintain his advantage to take his 96th world championship grand prix win.

At the start, the Dutchman led into the first corner, shadowed by Hamilton and Bottas.

An off for Nikita Mazepin at Turn 3 saw the Haas driver leave the circuit on the opposite side of the track to Romain Grosjean’s fiery crash last year.

The Russian driver sustained damage to the front wing and right-hand side of the car, eliminating him from the race and drawing the Safety Car before the completion of the first racing lap.

Under the Safety Car, Sergio Perez stopped to swap to another set of soft compound tyres before chasing back to the train of cars.

He’d been forced to start the race from pit lane, rather than 11th on the grid as he qualified, after his car rolled to a stop on the formation lap.

Verstappen led the field slowly to the restart, Hamilton tucked up in his slipstream with Charles Leclerc third, having despatched of Bottas on the opening half-lap of racing.

The second Mercedes came under the attention of Lando Norris, who’d passed Daniel Ricciardo, while Pierre Gasly lost his front wing in the pack and down the order Mick Schumacher spun off.

With debris on track, the Virtual Safety Car was called.

When racing resumed, Verstappen held a 1.3s advantage over Hamilton, with Leclerc a similar distance further back in third. 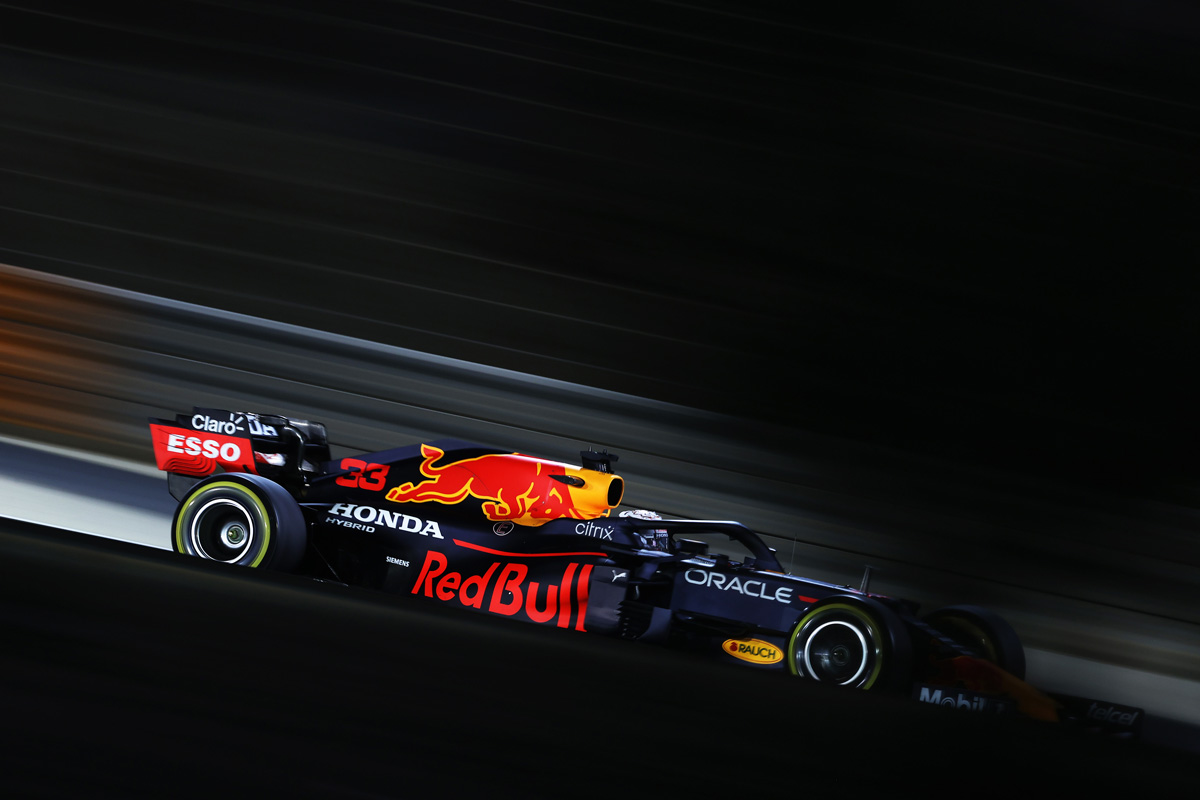 Max Verstappen in action at Bahrain

Using DRS down the front straight as they began Lap 6, Bottas sailed by the third-placed Ferrari, defending on the run to Turn 4 to complete the move.

In the pack, Perez’s progress was rapid, carving his way to 14th quickly, Sebastian Vettel was something of a pilot fish for the Mexican.

The pair rose to 13th and 14th inside the opening 10 laps, swapping places on multiple occasions.

A brave move by Norris saw the McLaren driver try around the outside of Leclerc at Turn 4, though the Ferrari was having none of it and ran him out of room on corner exit.

Norris tried to hang on through the next corner but had to concede two turns later, eventually making the move stick down the front straight two-thirds of a lap later.

At the start of Lap 12, Ricciardo began his own attack on Leclerc, forcing the Ferrari driver to go defensive into Turn 1.

Norris took to the lane at the end of the lap, Carlos Sainz and Lance Stroll also taking service a lap after Fernando Alonso, who gained a place over Stroll as a result.

Hamilton stopped next time by, having a new set of hard compound tyres fitted.

As he exited the lane, Ricciardo stopped for a set of mediums.

The additional lap was costly for the Australian who dropped a swathe of places courtesy of the powerful undercut effect.

Red Bull did not react to Hamilton’s stop despite the Mercedes driver having a significant pace advantage.

At the end of Lap 17, Verstappen pitted.

A 2.7s stop saw the Red Bull emerge a clear second to Hamilton, who enjoyed a near seven-second advantage out front – a swing of nearly nine seconds in total during the pit sequence.

The key difference was that Verstappen had a set of medium tyres fitted, versus Hamilton’s hards.

Having climbed to third, which became fourth when Bottas found a way through, Perez pitted as the field started Lap 20.

The lead battle was slowly condensing, Verstappen enjoying a pace advantage to the tune of 0.5s a lap.

In the pack, a three-way scrap developed between Vettel, Alonso, and Sainz, the trio swapping and reswapping places, aided by DRS.

Perez’s march towards the front of the field continued, picking off cars at regular intervals as he rose to a legitimate seventh at mid-distance.

Meanwhile, Verstappen was still reeling in Hamilton out front, though Mercedes had the trump card in Bottas, who was in an awkward strategic position for Red Bull some five seconds back of the Dutchman.

Hamilton boxed at the start of Lap 29, fitting another set of hard compound tyres and sending him back out, seemingly on a three-stop strategy.

It dropped him only to third, while Mercedes instructed Bottas that his middle stint would be long. 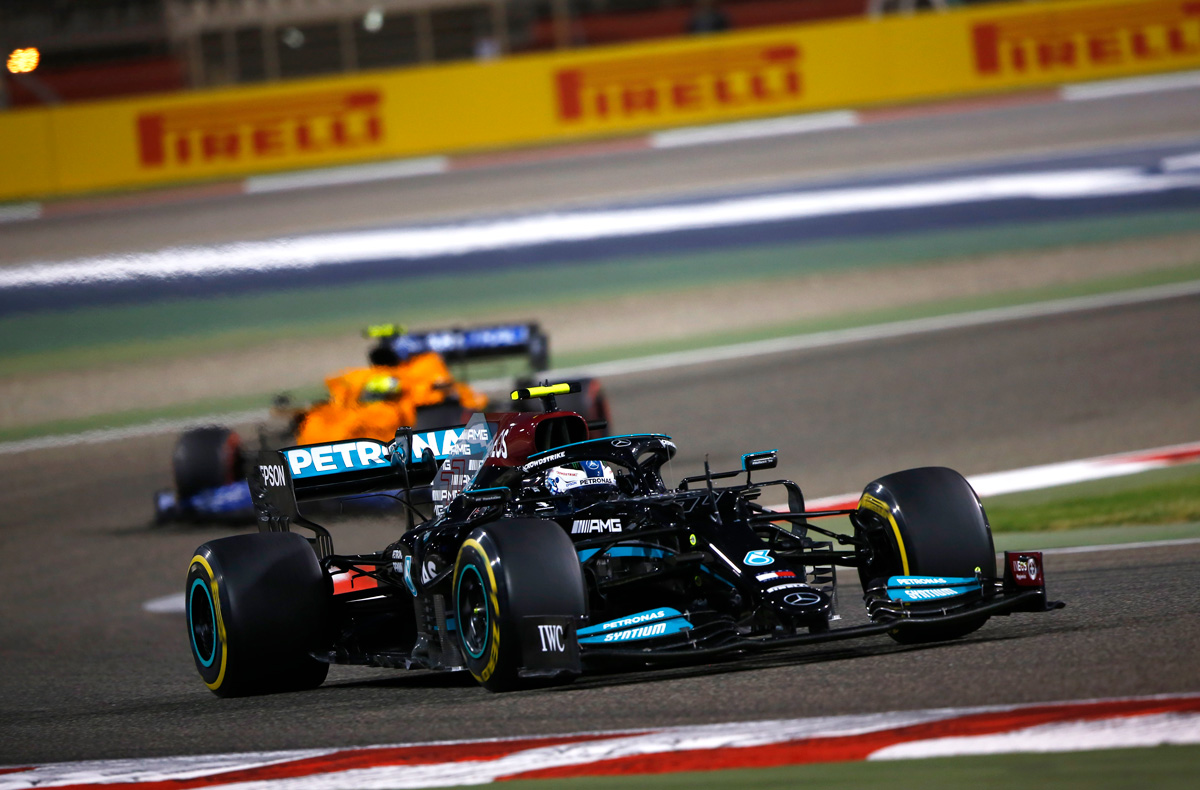 That proved something of a coded message as the Finn stopped as he commenced Lap 31.

His challenge, however, was blunted by a 10.9s pit stop when the right-front wheel wouldn’t release from the car.

It saw him drop to fifth behind Norris and Leclerc, all but taking him out of contention as far as the win – or an ability to influence Red Bull’s strategy – was concerned.

Ricciardo pitted for the second time on Lap 33, following Leclerc as the pair rejoined eighth and ninth on road.

Alonso’s F1 return was short-lived, forced out with brake issues after 33 laps.

McLaren hauled Norris in a lap later, allowing Bottas back through to third as the squad covered off the undercut threat posed by Leclerc.

With 18 laps remaining, Sainz had a set of hard compound tyres fitted to his Ferrari as he rejoined in ninth.

Perez was in next time by, a 2.3s stop saw him out in front of Stroll in seventh place.

The Aston Martin driver was able to pass his former team-mate at Turn 4, the pair running side by side only for Perez to cede.

As that happened, Verstappen took to the lane for the final time, bolting on a set of hard compound tyres in 1.9s.

Hamilton reclaimed the lead as a result, holding an 8.3s advantage with 16 laps remaining.

Mercedes advised Hamilton that it would see the Red Bull close with about five laps left in the race.

On Lap 42, Hamilton surpassed Michael Schumacher’s record of most laps led in Formula 1, moving the tally to 5112.

A clash between Vettel and Ocon saw the pair pointing the wrong way at Turn 1 on Lap 45, though both were able to carry on.

Vettel sustained damage to his front wing after tagging the rear of the Alpine as he locked up and slid into the Frenchman.

The stewards confirmed they would investigate the incident and, in the closing stages, duly handed down a 10-second penalty to the German.

The battle for the lead built to a crescendo, Verstappen closing in on Hamilton as the laps ticked down but his progress agonisingly stinted.

Faster through the middle third of the lap, the Red Bull driver continually chipped away to slowly reel in the Mercedes.

On lap 51, Hamilton ran wide at Turn 10 following a lock up, his tyres 10 laps older than his rival’s.

It allowed Verstappen to move within DRS range as they began Lap 52, and a lap later he attacked, forcing Hamilton to defend into Turn 1.

Three corners later, the Red Bull was through, though he ran wide on exit.

Looking to avoid punishment, he ceded the place back to Hamilton on the back straight before re-engaging in battle.

A slide late in the lap hurt Verstappen’s charge, his tyres appearing to overheat as he began struggling for grip.

It blunted his challenge such that he slipped out of DRS range as the pair began the penultimate lap, as Bottas pitted for fresh tyres and a tilt at fastest lap – a point held at that stage by Verstappen.

Verstappen closed back to within DRS range again, leaving himself one final opportunity on the last lap of the race.

He opened the rear wing down the front straight for the final time, though he was close to a second away from the Mercedes as he did.

Hamilton looked to have him covered, the Brit not feeling the need to defend from his young rival, and held on to a narrow win after a nail-biting finale and promising start to the 2021 season.

As if to rub salt into Red Bull’s wounds, Bottas stole the point for fastest lap as he took the chequered flag.

It was the first time Hamilton had won the opening race of the season in six years, and naturally meant he heads the championship after the opening race with 25 points over Verstappen with 18 and Bottas 16 (15 for third, and one for fastest lap).

Mercedes leads the constructors’ championship with 41 points over Red Bull on 28, with Norris and Ricciardo combining to score 18 for McLaren.

Formula 1 next heads to Imola for the Emilia Romagna Grand Prix on April 16-18.