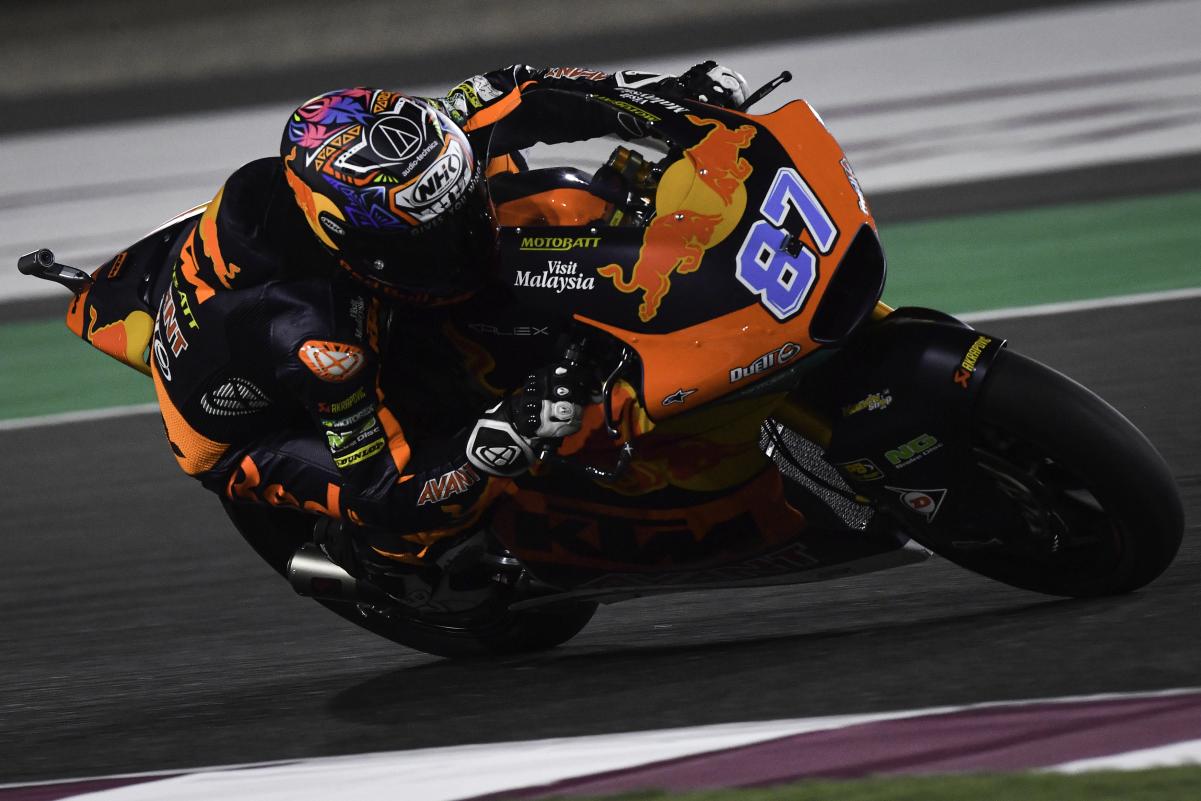 Remy Gardner has fought to a finish of second position, behind Sam Lowes, in the Qatar Moto2 Grand Prix.

Having qualified sixth, Gardner dropped as low as eighth on Lap 1 but spent more than half of the season-opening race circulating in second spot.

However, Lowes (Elf Marc VDS) always looked comfortable once he got to the front and ultimately took victory over the new Red Bull KTM Ajo rider by 2.260s after 20 laps around the Losail International Circuit.

Fabio Di Giannantonio made it a podium for the Gresini Racing Team in the first race after Fausto Gresini’s death, thanks to a final-lap pass on Marco Bezzecchi (Sky Racing Team VR46).

Back at the start, Gardner emerged seventh from the opening corners before a Lap 1 battle with Di Giannantonio (Federal Oil Gresini) and Joe Roberts (Italtrans Racing Team).

The Australian took sixth position off Di Giannantonio on Lap 3 at the Turn 10 hairpin and grabbed another spot off Bo Bendsneyder (Pertamina Mandalika SAG) as they started the fourth tour.

Gardner was fourth when he got underneath Jake Dixon (Petronas Sprinta) on Lap 4 at the Turn 4 right-hander but lost the position when he had a loose run through Turn 9 and ended up wide at the next corner.

Gardner was soon on the tail of his Red Bull KTM Ajo team-mate Raul Fernandez and, with the race leader by then more than a second clear in the distance, the Sydney-born rider opted for a block pass at Turn 6 on Lap 9. The next target was Lowes, who dropped from pole to third at the start but regained one of those positions from Bendsneyder on the standing lap, then the other from Bezzecchi on Lap 3 at Turn 1.

As if to respond to the threat of Gardner, Lowes clocked the then-fastest lap as the Australian made his move on Fernandez, and the gap between the two generally remained around 1.3s for the next few laps.

The race leader put the hammer down with around half a dozen tours remaining and, but for a scare in the form of a penultimate lap track limits warning, the fight for victory was effectively done.

Attention therefore turned to the final step of the podium, and while Bezzecchi and Di Giannantonio both passed Spaniard Fernandez on Lap 18, the battle between the two Italians was not over.

On the final lap, Bezzecchi blocked at Turn 10 but Di Giannantonio fired Bike #21 up the inside through Turn 12 and ultimately prevailed in the drag to the line by just 0.013s.

Jorge Navarro (MB Conveyors Speed Up) was first of the non-Kalex riders, finishing 10th on a Boscoscuro chassis.

Lowes’ championship lead over Gardner is five points ahead of another round at Losail, the Doha Grand Prix, next weekend (April 2-4, local time).